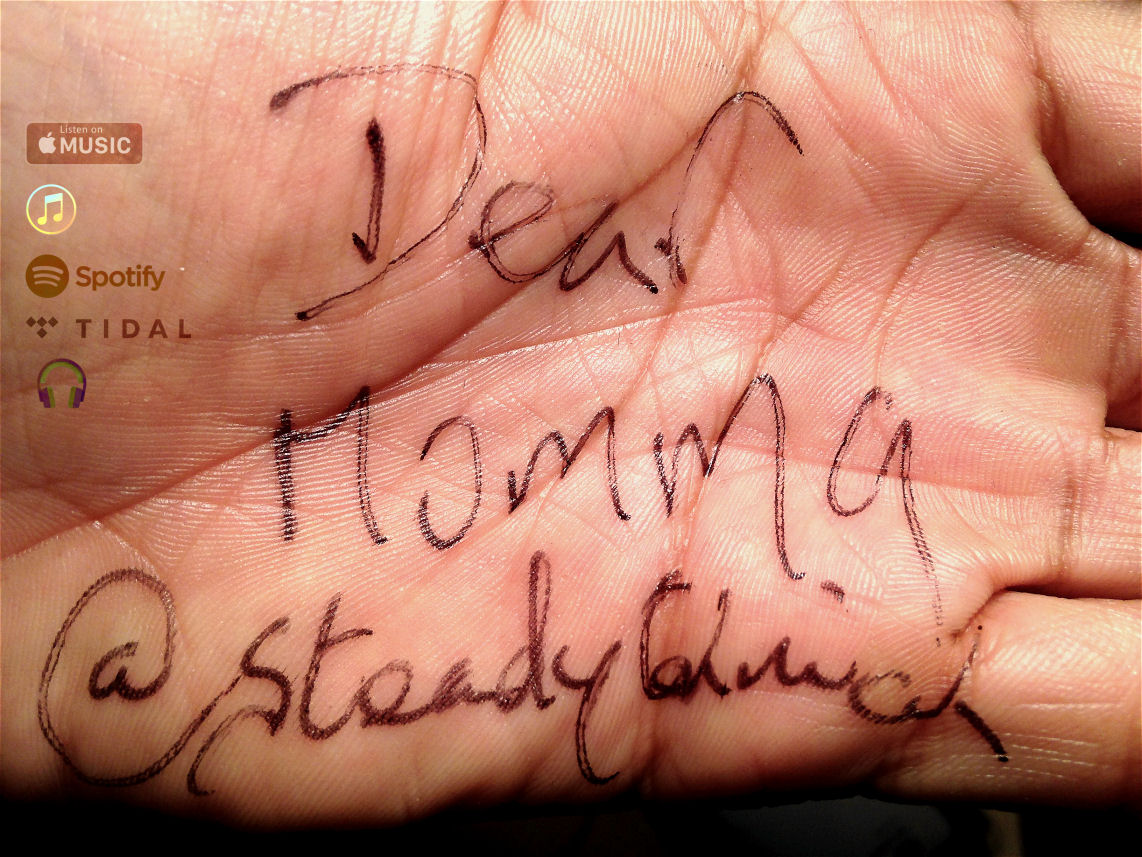 Now here’s an artist that’s definitely had a different life than I’ve had.

Here I am…a guy that’s basically decided as of this year that I’m no longer celebrating either Mother’s or Father’s Day…and I’m listening to a track that’s dedicated to Steady Tek-Nick’s mom and celebrating that part of our calendars.  Doesn’t mean I can’t appreciate where he’s coming from…in many ways, it helps me appreciate what he’s saying even more.  Through marriages, break-ups and divorce…I’ve had FIVE moms legally come and go throughout my life – and that’s not even counting the people I just considered to be ‘moms’ or mother-figures in my life along the way.  Dads…I had three of those as well for the same outlined reasons…and let’s just say it’s been extremely tough to identify with any of the roles all these parents have played along the way…or perhaps, just tough to acknowledge.  The songs I’ve personally written regarding either moms or dads have hardly shown the love; that’s putting it mildly…they’re just not something I’ve understood.  I had so many of each growing up that it felt like I had none at the same time…like I’d be more likely to identify with Mowgli from The Jungle Book more easily than I could relate to another person out there.  It often feels like I was left to be raised by wolves.

For instance…I have no problem or issue writing that entire first paragraph, because I know my own parents are generally so self-involved that the last thing they’d think to do in a day is read a single word I write.  Steady Tek-Nick is actually shouting out the opposite here on “Dear Momma” – and again, I can appreciate that.  I’m always hoping that maybe one day I’ll be able to relate to this kind of sentiment more than I do at the age I’m at now…and maybe one day I will.  It’s hard to say.

Half-apology, half-shout-out – Steady Tek-Nick is venting it all out with a fierce venom in his voice that clearly indicates just how much passion he’s putting into this message to his mom, Nicole B. Israel.  I think the world of a track like this honestly…I think it takes a lot of courage to write it – and when you consider how many other topics & subjects there are out there that we could write about when we push record and step into the booth – it’s impossible not to appreciate the time an artist like Steady Tek-Nick has taken here to shout her out.  Just don’t mistake the aggression in his voice for anything other than the passion of that message and need to express all this to her…there’s no anger here.  Because of the rasp that often enters into his voice that will remind 9 out of 10 people of Eminem – unless you really listen to these words, you’d be likely to think that he’s shouting AT her, not in support of her.  So keep that in mind when you’re listening to “Dear Momma” – this is all about the love.

Were it not for the slight accent that creeps into the vocals from Steady Tek-Nick that comes into his vocals honestly from his heritage and place of birth in Port Au Prince, Haiti – chances are you’d think he was born and raised by Eminem when it comes to how he delivers and approaches his vocals…and of course, the content of the lyrics.  He clearly gave his mom a run for the money as a kid…sounds like he was a bit more than a handful growing up, and that she put up with a lot as he came into his own.  Well – what else can be said other than that it takes a true man to write a track like this…and for whatever grief he put her through while he was growing up – he made it to the point where he’s able to now appreciate just how tough it all must have been.

But let’s face facts…if she didn’t raise him right to begin with, he’d never have grown up enough to be the man that he is today, capable of writing these thoughts, feelings and emotions down now.  So massive props to Nicole – you could certainly make a case for her being the true author of this song when it comes right down to it!

I would think this would be that moment she can really feel proud of the man she’s raised.  Steady Tek-Nick has put all his feelings out there and on the line on “Dear Momma” – and he delivers with confidence, precision over a solid minimalist beat that lets the words really come out with a sincere depth to the emotions.  It’s convincing to the ears – because you can hear the passion behind those words and you know it’s real.