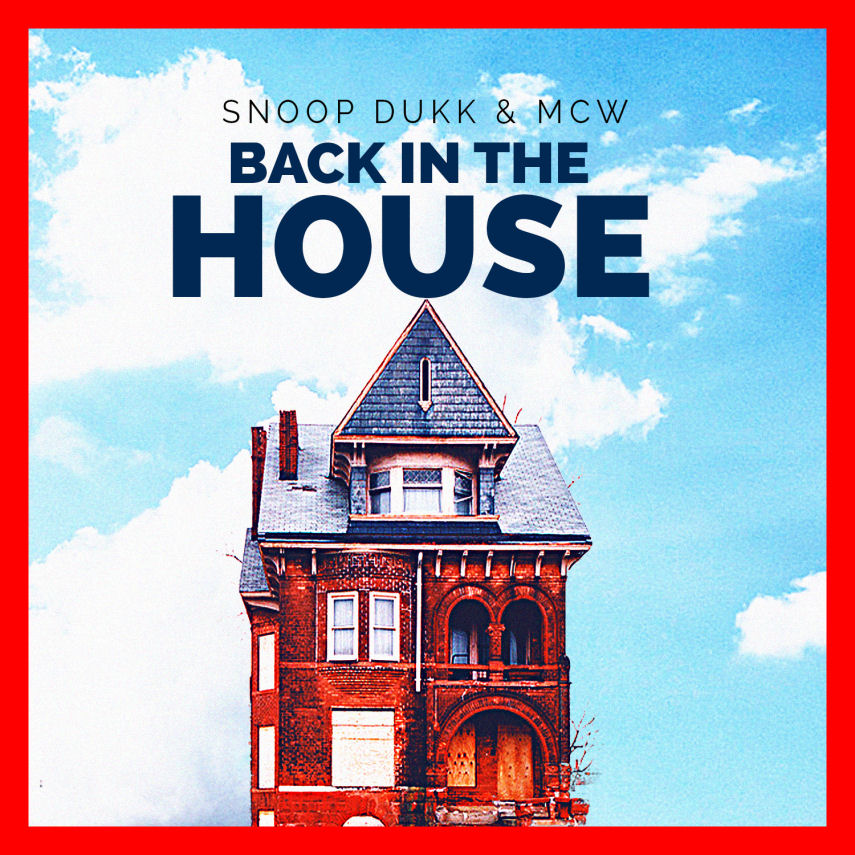 Snoop Dukk & MCW – Back In The House – EP Review

You know…sometimes I swear…one of these days someone out there I know is going to attempt to ‘punk’ me with something that is going to sound very similar to this. If it wasn’t for some pretty damn spectacular ideas here…I might have assumed this was going to be that very time. Imagine the scenario as I click open my playlist, load up SIX songs by Snoop Dukk & MCW on their new Back In The House EP only to discover that the entire EP is not even SEVEN minutes in total! Head scratcher right? You can at least be fairly comfortable in the assumption that this won’t be hard-core punk coming at you from a moniker like Snoop Dukk & MCW…beyond that…who KNOWS what to expect?

As crazy as that might sound…the sound itself is anything but crazy. These short little tracks have got me in the groove, I literally can’t deny it, not even if I tried. The opening track comes out flowing smoother than a chilled glass of Jay-Z-brand Vodka. They promise on this opening track that they’re “gonna make some music that people will like,” and right off the drop, the assembly on this track proves them right…at least in this set of ears on this side of the screen.

This EP is made with such incredible genius it kinda hurts – like…the kind of hurt you take on when you’re not sure if you’re fully in on the joke. Cause on the one hand…as short as it is…”No Ideas #9” is one of the most addictively-inviting & melodic songs I’ve ever heard; literally here and audibly there – this is the very definition of short & sweet. Then on the other hand…there is but ONE lyrical line in this entire song…”Yo, I’m a man with no ideas,” sung through an auto-tune effect in such a beautiful melody that you just can’t stop listening…but you have to wonder if this is mocking those that use auto-tune or lack creativity in their music… Whatever it IS truly…I don’t know; I just know that I love it.

Assisted by the vocal samples of DJ Chad Bloke…Snoop Dukk & MCW make a song that revolves around a crazy DJ-mix in “Spinning Records;” it’s nearly like Max Headroom became functional enough to push the record button. As much as it might not be what you’d expect in traditional song-writing and assembly, there’s zero denying that this EP has been electro-entertainment through and through up to this point.

The beat, tone, production…literally everything changes for a moment as Snoop Dukk & MCW get up close…like…real close in “Hey Salamanda.” This is about as weird as it gets; think something like “Beetles” showing up at the end of the Richard D. James album…it’s about that out of place, about that weird, and hey, it’s not like we’ve been on the beaten path this entire time right?

We’re miles from normal here, though perhaps for a quick moment borrowing the rhythm from Dr. Dre in “Surrounded By Bamboo” they might have made an attempt, if not for the insanity you’ll find in the lyrics once again. But what am I supposed to DO? These tiny little nuggets that Snoop Dukk & MCW have come up with shine like audio-gold; and I feel helpless trying to resist them.

Case in point – the closing track, “Written By Robert.” This thing is GOLD I tell ya! As short and bizarre as it is…I mean…this is kind of like a Randy Newman version of an electro-track; let’s just say that the subject matter deals extremely intensely and exclusively around what is happening at the very moment this was written and leave it at that as far as the lyrics go. Musically…these two have come up with yet another winner.

And LESS than seven minutes later, here’s where you’d be, which is right where I am now, which is scratching my head going what the fuck just happened in here? I feel like I just took a full load of electro-insanity right to my musical-chin.

Was it supposed to be THAT good?

Tags: Back In The House EP sleepingbagstudios Snoop Dukk & MCW