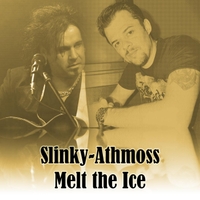 In a combination of talents, old-school musical influence and international collaboration, Slinky-Athmoss are debuting one of the singles from the upcoming album between these two coming out towards the end of this year. “Melt The Ice” is a rock-ballad. Yep…it’s been a while hasn’t it? Maybe a decade or three even…

So who do we have here…we’ve got Slinky coming from Sweden…and we’ve got Athmoss whom we’ve seen on our pages here before coming to us from Germany. We’ve also got Alexandrex on the drums…location undisclosed…top-secret…classified…or at least I couldn’t find it. That being said, it seems as if he’s right at home supplying the big beats that this rock-anthem required in this project of Slinky-Athmoss. All players contribute some real genuine moments of passionate commitment to the music and really put the work into the performance & recording, you can hear the hard-work and effort.

Always keep in mind – singer Athmoss is singing in a language other than his own; you give it your best shot of singing in German and see if you come halfway close to his ability to sing in English. He does well in an emotional performance on “Melt The Ice,” there are great bends in the tone of the song that have allowed him to write some particularly dynamic parts that work with the song in an excellent way. Athmoss has to watch the end of those notes when he’s drifting off at the end of a word…when you hear the energy drop, sometimes the tone does as well; but on the higher-end of his vocal-scale, he’s demonstrating some truly powerful notes and a massive presence on “Melt The Ice.”

Guitarist Slinky gets his moment, or rather, plenty of them throughout the song. Opening up the new-single with melancholy tones and then surrendering the melody to the piano until returning to bring up the chorus with inspiring tones. You get little clips of his guitar, parsed out in a meaty & satisfying way until he finally gets his real turn in the spotlight and dives deep into a highly-skilled and proficient solo.

Ha! I just noticed that Guns N’ Roses were listed as a ‘recommend if you like’ from their page at CD Baby containing the “Melt The Ice” single just as I was about to comment on the Slash-like nature of the guitar solo & sound. Definitely makes sense to me, and the skill level presented here on this single has to at least make you wonder…sounds like Slinky could hold his own against Slash if you were to ask me…

Overall “Melt The Ice” is a well-written song. There’s no mistaking it for anything other than it is – this is certainly the rock-ballad of no apologies, going against the grain of nearly anything out there in the music-industry today. But with that being said, just because a genre or style has been abandoned doesn’t mean that it’s ever lost the fan-base that made it popular and loved the music in the first place. I believe very firmly there’s a place for every sound; and right now some power-ballad fans out there are absolutely jumping for joy with the news of a new single that represents a time, tone and sound of music they’ve loved and thought long lost.

And if this is what you love, they won’t keep you waiting long for a whole lot more with a brand-new album due out at the end of this year. Keep yourself posted right here at: http://www.athmossmusic.com/ and find the new single “Melt The Ice” here: http://www.cdbaby.com/cd/slinkyathmoss