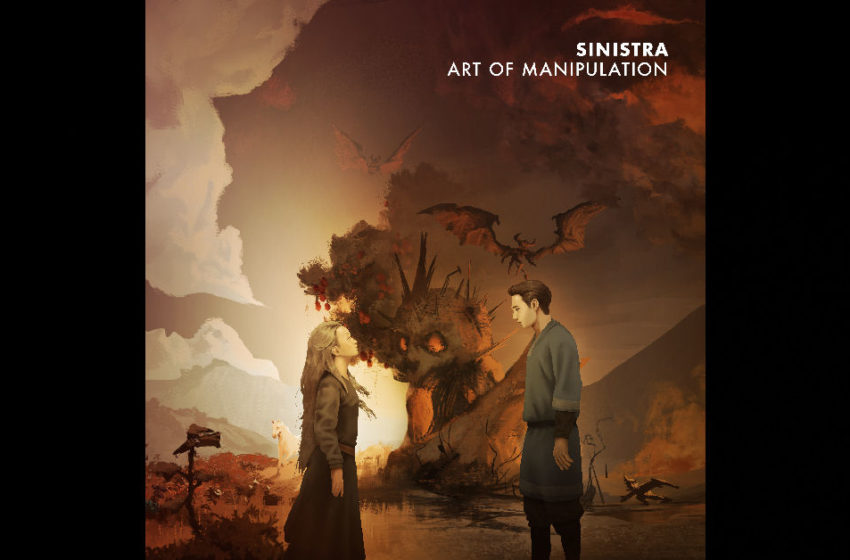 Quite honestly, I can think of legions of people I personally know that would absolutely love what Sinistra has created with “Art Of Manipulation” – this is one of those hybrid cuts that truly has it all.  From the immaculate sound of the instrumentation that starts the smooth descent into Alt-Metal mayhem, to the angelic & graceful vocals that float along the surface with thought-provoking lyricism, to the all-out gripping musicianship and max-power of this song at its most intense – “Art Of Manipulation” is a freakin’ master-class on how to go about doing things RIGHT.  To say this is a stunning single would be to put it mildly…if you’re asking me, when it comes to anything-Rock related this year, Sinistra has got one of the best cuts I’ve heard in 2020 without question – this is a savage & strong victory for this band.

Based out of Costa Rica, Sinistra is self-described as an ‘art project’ that is led by the talents of Antonio Masís (Vocals, Bass) – and that’s an accurate way of looking at this band’s music, especially if you’re factoring in the design of the composition & structure of the song in addition to the spectacular animated video put together by Sergio Castro to support this single.  Joined by a team of wildly skilled A-list players in Ari Lotringer (Guitars), Marvin Picado (Synths, Bass), & Norman Mena (Drums, Percussion) – these guys sound like they absolutely belong making music together, displaying a seriously unified front that reveals no weak points and a hell of a lot of depths to dive into in the layers of strengths.  No joke – I DARE YOU to try and find fault here…though I can save you a whole shitload of time by just tellin’ ya that you won’t find any…Sinistra has put in an immaculate amount of attention to the details.

I think the comparisons to a band like Tool are going to be 100% inevitable, but also somewhat justified.  Ultimately, I think what Sinistra is doing takes it further into the Rock-realm and has its own identifiable sound – but I’d fully understand that people would hear a bunch of similarities in this single’s most haunting & melodic moments in comparison to what Tool does.  You could also make an honest argument that the level of the instrumentation & musicianship you’ll find in Sinistra certainly has the potential to rival what it is one of Rock/Metal’s most revered bands in Tool as well – at the end of the day, even just being mentioned in the same sentence likely already has fans salivating over what they’ll potentially discover on “Art Of Manipulation.”  Every time that Sinistra flips the switch just past the two-minute mark for the first time, and starts to plunge straight into the dank heavy vibes they create so magnificently, I can’t help but sit here and just straight-up marvel at the amount of punch in the mix.  The quality of the “Art Of Manipulation” from performance to production is outstanding, in EVERY way.

Not only do I love this single personally, but I have zero doubt that Sinistra will find the audience it deserves with a song/video combination as strong as what’s to be discovered on “Art Of Manipulation.”  Everything about this single speaks volumes on behalf of itself…the music says it all so much better than I ever could…and not that a track like “Art Of Manipulation” NEEDS to have another advantage, but it’s awesome that it’s got another powerful tool in the video by Castro to help set them apart from the rest.  Visually, it’s got all the quality and cleverness that the song itself has, making for a perfect onscreen pairing that keeps you every bit as captivated & entertained as the music & vocals do on “Art Of Manipulation.”  Hands down one of the best Alt/Rock/Metal cuts of this year – if Sinistra keeps this up, there’s no question that once the world opens up again and those live stages are rocking once more, that a band like this could go on to dominate every corner of the globe & every set of speakers in between.  I’m massively impressed with Sinistra on every level – “Art Of Manipulation” isn’t your average ordinary every day single by any stretch of the imagination – it’s a full-on sonic achievement.

Find out more about Sinistra from the official website at:  https://sinistramusic.com