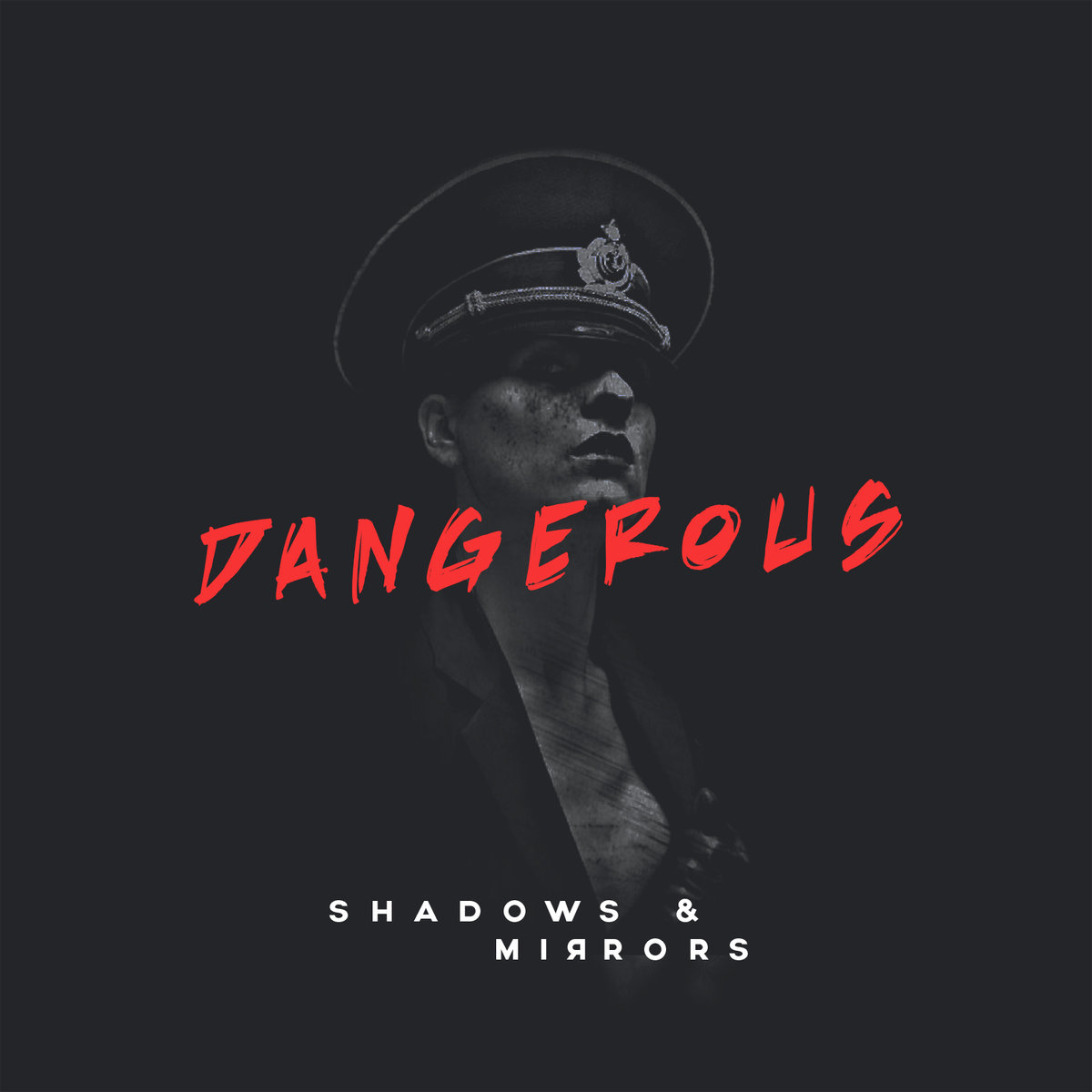 Some pretty inventive stuff coming out of the speakers this morning due to the dark-art & mischevious-music of Rockford, Illionois’ industrial/goth/electro/rock band Shadows & Mirrors. A set of rhythmic-grooves that pulse wildly like the beginning spurts of a jugular-stabbing; the music still has a ton of life to it thrashing out. It is very difficult to obtain a ton of information on the band itself, other than that the words and music are entirely written by Brian Diamond; it could be a one-man show here…though I’ve noticed several references to ‘band’ on the social-media boards. So I’m thinking potentially a duo…possibly maybe a three-piece…it’s honestly hard to say and their current video “Confession” was no real help in finding that out, although it was rad to listen to & watch 100% of the way through.

But that’s for an upcoming album…at another time. Right now I’m focused on Dangerous…regardless of how many players or members of the band there actually are – it definitely sounds like a cohesive EP with a wild set of ideas contributing to a somewhat experimental-electro feel alongside a menacing-vibe of industrial/goth undertones that all attempt to pull you six-feet under. In a good way…if that’s possible…you get what I mean…I think…

As it started with “Christian Woman” I thought about how I used to be in a band with a singer like this at one point myself, long before I started to sing on my own. That dude was largely responsible for me eventually becoming somewhat of a singer…and it wasn’t because I didn’t like the tone of his voice, it was more because I couldn’t predict which freakin’ way it was going to twist or turn next; and at that time, it wasn’t what I was looking for. I’d probably be a lot more open to it now…and hearing the way that the vocals fly all over the map in the opening tune with their tone & attitude fitting in bizarrely alongside the music. “Christian Woman” reminded me much of the music of Prick, but updated in production & entertainment-value…and towards the fourth minute & on, quite reminiscent of bands like She Wants Revenge and that vein of dark-rock with atmosphere & distinct energy.

The EP’s title-tune “Dangerous” starts out completely awesome…I love the electro-riff that repeats to form the staccato-backbone of this melody. Great vocal-ideas haunt the background…Shadows & Mirrors have done well to put enough LIFE into the tone of the vocals…with is much more expressive and similar to what Prick was doing in the mid-90’s as opposed to the flat, lifeless tone that She Wants Revenge often put into their music. Still – “Dangerous” is very similar to that style & sound of SWR through the writing of the hooks in this tune and how they’re delivered. Solid production and highly entertaining through its rhythm, Shadows & Mirrors certainly pull out another win with “Dangerous.”

With a highly-energetic groove in the cut of “Black Sunday” combining with a set of nearly-grunged vocals…this third track comes out like a cross between the Propellerheads and something like Stone Temple Pilots or Alice In Chains. I was a little mixed on this one…I found myself liking the beat & rhythm, the flow to the vocals, but not so much my favourite for the lyrics…but it’s hard to complain when they fit right into the music as well as they do metering-wise. I think the combination of the two contrasting elements of sound, grunge-meeting-electro in this track…it has moments of brilliance in each part written…but I can’t help but think the best part of “Black Sunday” is truly at its end. In a twist of the truly bizarre, the rhythm brightens, and the harmonizing vocals come in to deliver a final melody-line that starts on-time, then it purposely drifts one-step behind the beat it was on, just to mess with your mind that 10% more – thanks Shadows & Mirrors!

“Judas” takes it closer to the dark-energy and pulse of Depeche Mode’s later-work. I can hear that this might be the track that would take the longest for people to latch onto…its rhythm is produced a little more flatly…its atmosphere slightly-dulled in comparison to the previous vibrant, versatile and wild-electro sounds. The vocals…I like the sound, I like the words…on this one I felt like the melody was a little ‘done’ in a few spots throughout the verse, but I also felt like the chorus and its background-vocals all layered in like souls from the seventh-circle of hell all sounded incredible enough to get past it. As far as the energy and grind of “Judas” goes…I maintain that it’s probably one of the least accessible-tunes on the EP as far as the hooks are concerned; the build-up to the song is gradual and the payoff IS there by its ending.

I can certainly testify that they’ve gone about making music that really has more than one way into it. While it might sound mean, dark & brooding at times like “Nighttime Eyes” does, there is plenty of rhythm, hook and versatility in the music of the EP in general and the song specifically to pull you in. Switching up the vibe cleverly once again mid-point in the track, they sink the energy low but keep the dark-intensity up as it heads into and from its chorus. The guitar-line and how it bends into such sinister & deadly sounds is the absolute highlight of the music on “Nighttime Eyes” for me…it’s killer.

LOVED the opening to the final track “Criminal Minds” – the music sounds incredible as this last beat comes kicking in. Smart synth-pulsing away and awesome additional notes, tones & beats come in to fill this one up to the brim, but careful to not over-fill. I might have wanted a little more energy in the chorus from the vocals…but that’s me personally and not necessarily what Shadows & Mirrors are going for mind you…it just naturally feels like they’re supposed to come up a little in their aggression when the chorus starts into its flow. But once again, overall, Shadows & Mirrors don’t disappoint…there are just as many sharp hooks in this final tune as there have been all throughout the Dangerous EP. It’s a bizarre trip to listen to these six-songs…I can’t lie to you there…but like every trip I’ve ever tripped-out on…this one was well worth the ride it takes you on from beginning to end.