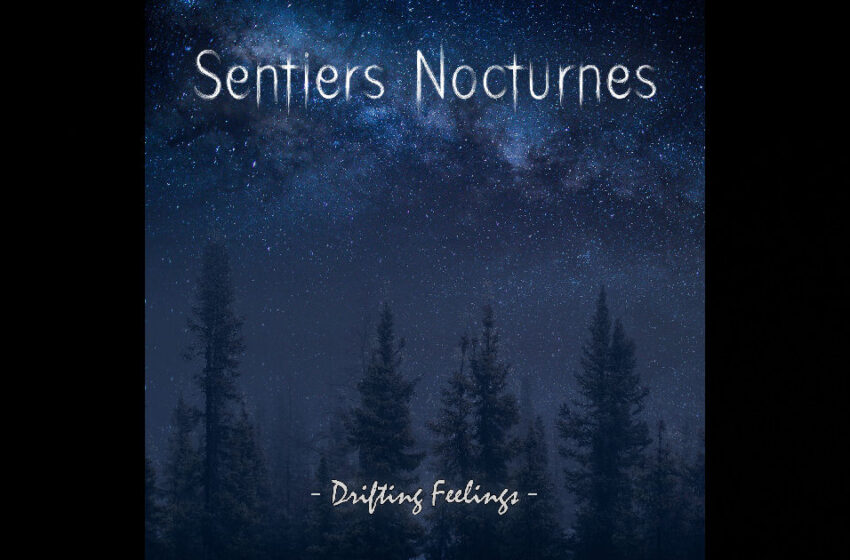 “Where does your mind take you in the dark of night?”

Not only was this question posed by Sentiers Nocturnes earlier this year back in April, within one of this project’s first social-media posts, but would ya look at that & listen here, wouldn’t you know it, this one-man solo act even went as far as to supply us all with the correct answer with the release of this savage set of five cuts on the Drifting Feelings EP.  Where does my mind take me?  To places just like this – with thoughts rampaging through my head at all hours, echoing sounds just like I hear raging on this very EP. 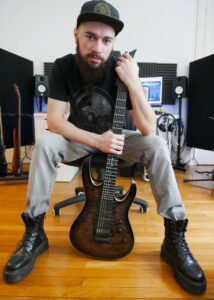 Dude should be mighty proud of what he’s accomplished here.  Not only are the musicianship & songwriting solidly impressive throughout the length of this instrumental record, but the crystal clarity in the production should win Sentiers Nocturnes some serious awards when it comes right down to it.  The effect of such spectacular sound, is immediately on display through the haunting notes & textured tones of “Dark Clouds” beginning…it’s so bare bones at first, but so incredibly vivid, sensory, and real.  As it progresses, you feel that darkness closing in around you even more…and somewhere in the back of your mind, you know that this track could choose to gnash its teeth and bite you at a moment’s notice; it’s got that feeling of suspense building the entire way through the opening two murky minutes of “Dark Clouds.”  Shortly after, you’ll get that dose of supreme sound & aggression you could feel was coming at some point…and credit where credit is due, I think Sentiers Nocturnes made a smart choice by not choosing to bash us over the head with its more intense finale, so much as it expertly eased us into it instead by the clever structuring.  Songs like “Dark Clouds” have such endlessly impressive atmosphere to them…I guarantee you’ll be paying complete attention to this; for as sparse as it may seem, a track like this is so fully loaded with sound that’s designed to catch your attention, mesmerize, and enchant you that it should make a huge impression on any set of ears out there listening.  Hailing from France, by the time “Dark Clouds” explodes into its epic, supercharged, and all-out gripping finale, you realize you’ve just gone from the most isolated beginning, to an ending that blasts open wide to expand itself large enough to travel its gnarly sound clear around the globe & back again.  Not only does “Dark Clouds” make a remarkable first impression & resounding impact, but it’s a track that’ll have no problem at all continuing to haunt the hollows of your souls for many years to come.  Turn your lights on folks if you wanna feel safe & sound while you turn this the fuck right UP…”Dark Clouds” is a real deadly start.

“Burst” does exactly what its title implies, launching into immediate aggression and powerful vibes, ripping open the seams of this record, and tearing us all the proverbial ‘new one’ in the process.  Sentiers Nocturnes spares you no quarter as you listen to this tune…there’s no slow build-up to ease you in like you were fortunate to have found on the opening track – now it’s sink or swim folks – this dude ain’t waiting for you to catch up any longer – it’s full speed ahead here.  I’m assuming that as a one-man band, he’s rockin’ the majority of his cuts on a digital level with programming & whatnot…you know how you dedicated guitar heroes love to do that & get wild with the fret bars & all.  When you’re doing things right like Sentiers Nocturnes is however, you take your time to make sure everything’s perfectly in line, has that variation in sound we’re looking for as listeners, and of course, steal the rest of the show with the main meat of the instrumentation radiating from the guitar, which it certainly does throughout this whole record.  “Burst” is a fired-up experience that never relents on doing its level best to burn a permanent hole in your speakers…killer low-end sound, impressive twists & turns in the complexities of the musicianship & song’s structure…all-in-all, it’s pretty damn undeniable entertainment.  I gotta admit, as much fun as I was already having in listening to the riotous first three minutes of this song – that insatiably AWESOME bend he puts into the perfectly distorted tones in the final minute is completely worth the entire price of admission all by itself.  Sentiers Nocturnes pulls no punches when it comes to the intensity of “Burst” & continues to reveal the innovative use of wild structures and sonic dynamism.

The hybrid nature of the fiery fusion Sentiers Nocturnes generates is shown through tracks like “Silver Lining” that have more length to them & space to be filled, which this dude proves he has no problem with doing whatsoever.  You’ll find Drifting Feelings continues to mount up its ambitious tendencies as it plays on, especially over the course of its first four cuts for sure, with the final fifth track playing like somewhat of an outro after everything you’ve experienced and how this EP progresses from start to finish.  You got the slower intensity & powerful switch in sound that “Dark Clouds” provided…you transitioned right along with Sentiers Nocturnes as a more aggressive moment came out through “Burst” – and as you head into “Silver Lining” and the nine-minutes-plus of “Safe Place” to follow, you can feel that shift towards a more complex & adventurous journey in sound in the middle of this record.  Whether you define it as Post-Black Metal, or Blackgaze, or plain ol’ instrumental music is all beside the point – what you hear is an onslaught of sound that sparkles between its savagery – cuts like “Silver Linings” are every bit the confirmation anyone would need to know that Sentiers Nocturnes is just as capable of creating endearing melody as it is capable of generating scorching hot metal-infused moments that could melt your face.  The layering of the instrumentation and just how right & tight this dude has found the mix for the sound he’s looking to create is what continually stands out as impressive, no matter what gear you find the music in…it’s impeccably well-produced and played with significant passion that we can all hear without question.  From the ragged rumble of the low-end chops, to the searing lead tones ripping up the frets, to the rambunctious twist “Silver Lining” will take just past the four-minute mark, and the song’s beautiful exit through the piano finale in its final moments – it’s tracks just like this one that have no issues whatsoever filling your whole house with sound & stunning ideas from the top to the bottom.  Structuring remains seriously key in what Sentiers Nocturnes does so very well…”Silver Lining” revisits that haunting melodic-style beginning before detonating supremely later on. 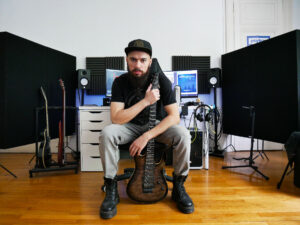 Does it get any better than how “Safe Place” builds itself in the beginning?  I’m not just talking about this record, I mean like…ever.  For me, being a massive fan of all-things-Post…you get the most Post-Rock influence on the sound of this particular cut, in both the sound & design, especially at the start.  Here’s the thing though…for a track that’s 9:16 in length…like…c’mon – there’s not a solitary moment of dead space here, or anything that I wouldn’t want to listen to again & again & again!  LISTEN to spots like the breakdown in the fourth minute…listen to how Sentiers Nocturnes boldly plays with timing & tempo by becoming savagely behind the beat, and of course, listen to how it all links up incredibly in the surge back in…dude’s thinking about clever ways to stand out that go far beyond the beastly distortion, you feel me?  There are moments where he’ll explore the infamous ‘wall of sound’ – and just as many scattered throughout this monumental experience that’ll take you into lower-key vibes where it’ll break down to just the guitars…essentially, “Safe Place” pretty much has everything you’re looking for & more, roaring through its loudest moments at full strength, but making equal impact through the intricacies of its most delicate points as well.  The use of the ol’ loud/quiet serves Sentiers Nocturnes extremely well here on the EP’s longest cut…there’s never been a second where I felt bored or like he’d expanded this idea beyond what it was capable of providing us with – loud or quiet, it don’t matter – it’s a captivating cut.  Listening to the way it begins and how you can feel that build happening between the bass-lines and the pound of the kick drum…that first incredible note pouring out from the guitar around the 1:10 mark…I mean…it’s as fascinating as it is compelling & all-out interesting when it comes right down to it.  For a debut record, it’s extremely beyond-rare to find a song like “Safe Place” that has such an insightful and innovative design, executed as precisely & professionally as you’ll find here…big ups to Sentiers Nocturnes!  It’s a whole lot to listen to for sure, but for fans of this genre & style, it’s a whole lot to love.

“Adrift” plays like the cinematic experience the opening quote I started this review with creates for ya…this is the kind of song you see in your mind while you listen.  While I’ll admit, it’s probably not intended to be quite as addictive as the rest…or at least perhaps for the same reasons as you’d find bond the other four together…I gotta say, I felt like “Adrift” was a seriously tasty final track and the perfect way to conclude this entire experience.  Think about it – even the layout of these five songs speaks volumes on behalf of how Sentiers Nocturnes is planning things out to the nth degree, and achieving fantastic results by being this insightfully prepared.  From the haunting opening of “Dark Clouds” right on through, the whole experience in listening to Drifting Feelings takes you on a truly epic adventure that shows real progression and an sonically logical design to its layout that’s spectacularly book-ended with the atmospheric vibes of “Adrift” at the very end.  Like I’ve often said here on these pages of ours, a great ending to a record should really contain that feeling of conclusiveness…just like listening to someone make a speech, you want to know when to clap when it’s over without having to be told – you want to hear it.  When you hear “Adrift,” you know you’ve reached the end of this set – it’s that conclusive in all the right ways…and before it’s all over, Sentiers Nocturnes will take the opportunity to dazzle ya once again devilishly clever ideas, crystal clarity, and a spellbinding, hypnotic sound that’ll definitely have you coming back for another serving of the sonic fortitude & stellar music on this record.

Fully stoked on what I hear so far in Sentiers Nocturnes, and equally stoked for the future of this project.

Find out more about Sentiers Nocturnes at the official pages below!