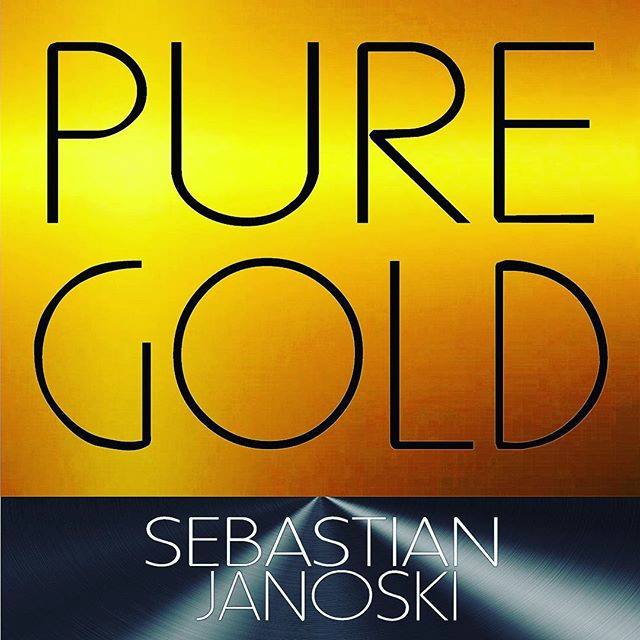 Put it to you this way – Sebastian Janoski has me feeling pretty optimistic about his future.  Whether or not I’m ready to acknowledge the new-single “Pure Gold” to be what its title might have you believe…well…I’m not quite so sure.  “Pure Gold Potential” – and I would have been all over that.  As it stands right now – you’ll get a fairly passionate and terrific performance from Sebastian that points to all the right things; there are great ideas and parts that are perfectly performed by Janoski with quite honestly little left to complain about other than the swirl of the mix itself.

“Pure Gold” certainly shows how powerful he could be…and I like that.  I like that each part sounds like it’s meant to be BIG and memorable…measurable with the impact it should make upon the listening ears out there I would think.  I’m not sure if it’s the rotary-speaker setting or not that busts into the chorus – but what starts fairly clearly in the verse tends to descend into a slightly over-filtered gamble that takes a major chance in assuming you’ll be able to stick with and follow it.  For many people out there – Sebastian is already asking a lot of you by keeping the words and vocals back so far into the mix of the music…personally most of you that read our page already know that this is generally an idea that constantly works for me – I like the music to be as big as the personalities that grace the microphone.  In that respect, I’m loving “Pure Gold.”

Where it runs into trouble slightly is that one dominant effect.  I’m honestly not sure if it is indeed a rotary-speaker setting on a pedal or what is exactly causing it – but I can guarantee I’m not the only one that hears it and the overall MASSIVE impact that this is making on the mix.  It shifts beyond putting him right in the mix of the music and turns it into a nearly claustrophobia as all of the sounds in the music slowly fill-in and cave right in around his vocals…which to be quite honest, is kinda really too bad!  I REALLY like what I’m hearing from Sebastian…and I like the way that I am hearing how he sings “Pure Gold” – but once that filter comes roaring in like surf to sand on a beach, there’s almost no finding him amongst the mix and all-encompassing music from there on in.

He is clearly still young, still evolving and still refining his sound and his talent – but make no mistake, he’s got all the right pieces in place.  Largely DIY in all-aspects of his music and career…I don’t know for a fact that he’s done the mix on his own for “Pure Gold” – but I’d assume that he has.  To me, you can hear the understanding of the concepts, the definition of the songwriting…but the studio-boards have all but blended him into oblivion right when the hooks in his new-song are supposed to be right there at their most beautiful and powerful.  It’s not ‘easy’ to hear them…or at least not as ‘easy’ as you’re more than likely hoping it’ll become – I think that Janoski, whether on purpose or not…has really given us a tougher time in deciphering that melody than perhaps he understands from his own perspective as the guy that wrote it.  Think of it like this – Sebastian knows exactly where to put the punch and the power into his lyrics…but if we wanted to sing along…we’d be completely lost.  Those words are coming naturally to him, as the songwriter – and I’m all for a ‘reason to return’ and coming back to something to hear what might have been missed on that first go around…but if we’re talking about that aspect in relation to the initial chorus and its impact on us – then sign me up for another go-around entirely because I wasn’t able to catch a single word.

A music-reviewer.  A guy that listens to music all-day, every day.  Country, metal, rock, pop, Xmas-music…you name it, I’ve heard it and I haven’t struggled to hear it quite like this one.  I have not ruled out the possibility that perhaps Sebastian Janoski has caught me reviewing music on the first day that I’ve officially become an old-man that can’t hear things properly.  That is bound to happen one day…and were it not for the other surrounding reviews today not feeling anything like this, I’d be more inclined to give that possibility more looking over…but sadly, I don’t think it’s me today, not yet anyhow.

Right now, we’ve got a great young songwriter that’s just gonna need a little more guidance to get him to the next-level, but a guy that you can hear is only audible-inches away from realizing his dreams at this point.  If I was a new artist…if this was my song…if this had just come back to me and I’d yet to send any others off to be mixed and or have heard them yet…then I’d probably be just as ecstatic as Sebastian and I’d be pushing this new-single all over the globe in a similar style to what he’s doing now I’m sure.

But I’m saying…hold-up brother-man, don’t sink your own boat by rowing all the way out just yet!

The ideas here…I really do think they’re “Pure Gold” – and I think that all this would take is a slight adjustment & tweak to balance out those two sounds between the music and vocals and get Sebastian back into the commanding position on his own song once again.  As of right now…someone in the studio declared a duel to take place at high-noon and the battle is on for who will come out on top whether music or voice, all the way down to the end.

He gets a choice though!  He could be satisfied with “Pure Gold” and continue to try to make that work, which I think is a very uphill battle despite the excellent quality of the writing of the song itself…or he could realize the “Pure Gold Potential” he’s got here instead and perhaps learn, refine, evolve and take it all to the next-level and supersonic anthem this song could become through a remix.  So…there’s that to look forward to I’d assume.  He’s clearly on the rise and clearly pushing his music and career as hard as possible right now – so I’d honestly say the sky is the limit as far as the quality of the writing is concerned.  Wherever the other hands that become involved come into play, or whether that’s his own instincts guiding the mix of “Pure Gold” – I honestly don’t know…but once that all calms down a bit, smooths-out and really lets Sebastian’s voice ring out with the obvious strengths it possesses…well…you mark my words – I think he’ll be a force to be reckoned with and one that has a long, wonderful career ahead of him.  His sound/style…his look and his candor suggest he’s a humble artist looking to learn and to make that next leap into the spotlight…I don’t think he’s far off the mark at all and I think “Pure Gold” has certainly done the perfect job of at the very least making us all curious enough to want to hear more.