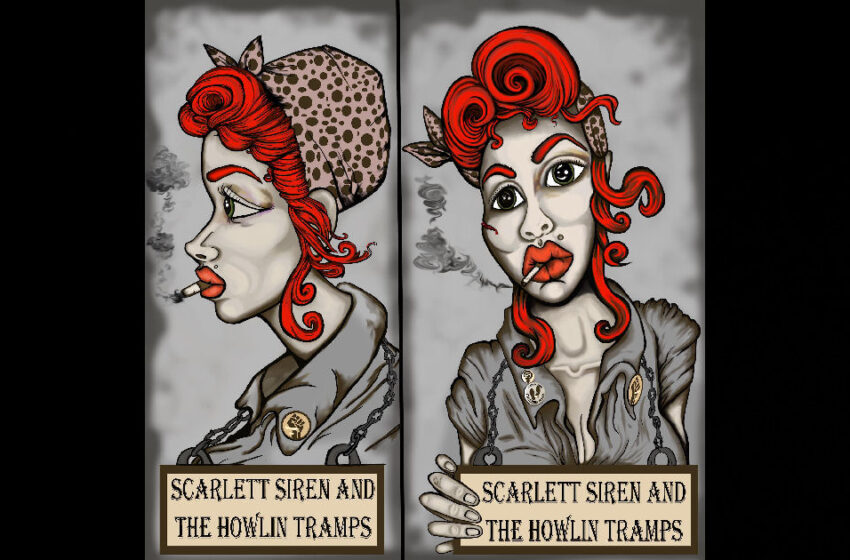 I mean…like…damn.  I was just looking for a friendly hello, and all I got was “Fuck You” in return.

Weird flex & unusual approach!  But as far as rejections go, they doesn’t tend to usually sound THIS good.

Anyhow.  There is more than one way to make an impression, and it’s really the music that does the talking anyway if I’m really being honest with ya.  Especially in the case of Scarlett Siren & The Howlin’ Tramps when it comes right down to it – the last thing I’d do is deny the fact that “Fuck You” is a genius tune and a brilliant single, loaded with X-factor personality and stellar music that can’t help but make an impact.  I don’t need to go into the whole explicit material takes ya outta the running to get a song out there as far as a clean one will take ya…the reality is you don’t make a cut like “Fuck You” with the radio in mind.  That being said, you don’t usually find this choice being made with what’s clearly such a single-worthy sound either…that’s actually much more of a rare find, and full proof that Scarlett Siren & The Howlin’ Tramps are clearly bucking all the typical rules in straight defiance of what you think you know.

So now, the battle begins.  Now it’s all about convincing the mainstream that one lil’ word ain’t gonna collapse their fragile universe just to hear it.  Swearing is no big deal, and I couldn’t give a fuck about that personally…you’ll hear it used for shock value all the time in music, and it’s generally boring – that’s not me being squeamish about swear words…I repeat, do not give a shit if you wanna use’em – I’m just saying that, IF you do – use’em like this band does will ya?  Say “Fuck You” with real conviction – and use it with purpose – SAY SOMETHING with these loaded & charged words – because that’s what makes the difference here in what Scarlett Siren & The Howlin’ Tramps are doing compared to so many others.  The main punch of their unapologetic chorus hook has all of these qualities in radical abundance with a real perspective and point of view along with it – it’s not about shock value; it’s an audible line in the sand.

Ultimately, “Fuck You” really is all about rebellion in multiple forms.  Whether it’s against societal norms, or misguided perceptions, or dumbass misogyny (like there’s any other kind), or stupid invisible rules like not swearing in a song that’d likely just be a hit everywhere otherwise – “Fuck You” – Scarlett Siren & The Howlin’ Tramps do what they wanna do, and if you don’t like that, please find yourself referring back to the title of this tune any ol’ time ya need to.  I’ve got nothing but love and respect for that at the end of the day – the only way to establish significant breakthroughs in art & music is to push & push & push the boundaries…and sometimes that makes a few of the ol’ suits & ties out there a little anxious, and a little nervous…and good; “Fuck You,” I say.

This isn’t about shock value when you’re listening closely and paying attention, it’s just about being real.  There are some people that straight-up NEED to hear these words – but all of us should want to hear this song.  The way that Scarlett Siren & The Howlin’ Tramps have put such an impressive dose of vibrant in-your-face personality on display, with such remarkably insightful, thought-provoking & poignant words that most people would never expect to find coming along with a song called “Fuck You” or the remarkably smooth sound this cut has, is nothing short of award worthy when it comes right down to it.  There’s damn near no way on earth most listeners are going to even get past the incredible personality & hazy live-wire charisma that Scarlett Siren has to begin with…because she really is that amazing when it comes to her stylistic singing and the spellbinding tone she’s got – but at the same time, I sure as hell hope that’s not completely the case, because she’s backed up by an awesome band with The Howlin’ Tramps as well.  Whether it’s the clever backing vocals that brilliantly infuse the ‘doo-wop’ days to complement a more current vibe that’s closer towards the side of unique artists like Florence Welch or Freya Ridings when combined with Scarlett’s wildly entertaining lead – or just the musicianship itself; this whole band truly holds their own with remarkable competence & balance from every angle you examine them from, standing strong in what sounds like a whole mess of emotions roiling their way through the lyrics & theme of “Fuck You.”  Basically, if there’s a complaint to be made, I ain’t hearin’ it.

If there’s one thing you can glean from the words & spirit of this tune – it’s that you can, and should, get the hell outta their way.  Scarlett Siren & The Howlin’ Tramps are not here to take your advice, they did not ask for your opinion, and they really do not care what you think – if you dig what they do, right on, sit down and find your ass a seat on their bandwagon, there’s always room for more.  But if you don’t…for some unknown and obviously weak-sauce reason like…I mean…you’d pretty much just have to not like ALL music if you can’t find your way into loving everything about this single…but if for some reason that’s how you end up feeling…no problemo hoss – “Fuck You!”  And in the very likely chance you find you’ve experienced some of what Scarlett Siren’s layin’ down on the mic with her immaculately badass vocals & pointed words that pull no punches in calling out those that definitely need it – you might just find you’ve discovered your new personal anthem for 2021, and a real kindred spirit on the microphone here.  Loving the keys, loving the violin, loving the saxophone…and I ain’t complaining about the rest either; there’s just as much stellar sound coming out from the guitars, bass, and drums here too.  Really, there’s not a damn thing about this cut that isn’t 100% addictive and perfectly well-executed; from the concept to the performance…there’s just no two ways about it – this is what a single really sounds like.

And not to harp on the point, or ride this excuse to type out a series of swear words – but kindly “Fuck You” too if you disagree with me here!  Scarlett Siren & The Howlin’ Tramps are blazing their own trail – and it sounds incredible.  Find out more about’em from the official website at:  https://scarlettsiren.com