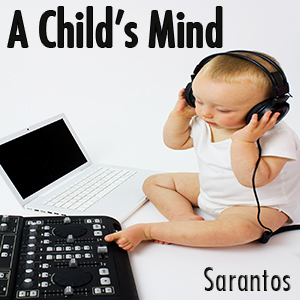 Sarantos continues to create pop-rhythms and sweet atmospheres here on his latest single “A Child’s Mind.” Some of you will remember Sarantos from past episodes of our show SBS Live This Week…the man is relentless in his music and work, it truly is to be admired. He produces quality singles at an alarming rate, all with polished production and nothing ever typically coming out feeling too rushed. He’s always been a light & playful charismatic charmer, and he continues to put his music-making efforts towards charity and helping others. All attributes to be admired for sure.

While I’ll admit his sound is not really one that resonates strongly with me personally, the last thing I’d want to do is discourage Sarantos from his music or his passions. And that’s not to say there’s nothing to like, you know I always believe we’ve got something in our music… He does pop well; while he might not be my number one choice it’s still not something I’d turn off. The melody in the music and the vocals are both there…the lyrics generally carry the weight of Sarantos’ music as therein always lies his message. Whichever project has captured his heart, eventually that leads to his pad, pen, microphones and recording studio and yet another new Sarantos song is born into the world.

In “A Child’s Mind” you get a mix of his longing for the protection of that childlike state, in that we might grow older and still retain our youthfulness; and also presumably deals with the much-less metaphoric straight-ahead literal meaning. He does well to internalize the emotional struggle of this subject and his performance is well matched to the tone and rhythm of the music. Sometimes gets a little too edgy on the pronunciation for my own taste but the melody is ever-present.

Like I mentioned…there’s no massively audible signs or tells that indicate Sarantos rushes anything he does; yet I often wonder what he might be able to achieve if he did take a full year to examine and record an album as opposed to the current heartbeat-rate of which he makes and puts out new songs. This five-minute example of his latest music continues to be of the same quality of his last, which again is good – but at this point I am thinking there must still be a way to challenge himself and his creativity further as he progresses down the road. Often a break in the music can lead to other areas of self-exploration, musical-inspiration and the opportunity to simply learn and experience new things of all kinds…which can lead to stunning new breakthroughs in art and music.

But who knows…maybe I have no idea what I’m talking about…that’s always for you to decide. I think Sarantos has done another good job here and made another solid song in his effort to blanket the internet in all-things-Sarantos. He’s a good guy with even better intentions – and they come shining through radiantly once again on his latest single “A Child’s Mind.”

Find out more about Sarantos here at his official page: https://www.melogia.com/