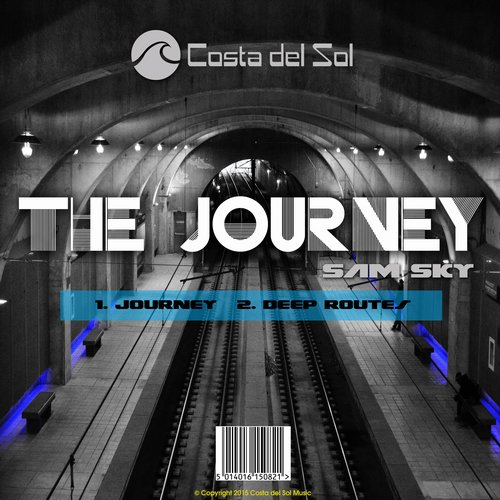 Been looking forward to this one!

Sam Sky officially released The Journey EP in the middle of September just earlier this year…it’s hard not to side with a rhythm we were digging so much we got involved with the making of the video as well; we put in some work on the video for the EP’s title-tune. “The Journey” was a track that stood out for its captivating mix of subtly & intensity…the sounds are gentle, but they move at quite a rapid pace. And with an electro-percussion groove and rhythm set firmly in its flawless mix, the hypnotic adventure of The Journey begins.

Cleverly building upon itself as it plays, smart electro hi-hats & shakers supply the rhythm alongside the repeating percussive-groove. Sam’s been smart about it…just as the repetition is about to become a touch too much, he backs it off to diversify the beat and let the atmosphere swirl around the main hook even more. Not too short, not too long…just the right kind of length for a track like this to be nailed down tightly with nothing left out or anything feeling like it needs anything more. It audibly sounds like adventure and a journey into the unknown…the atmosphere is enveloping and exciting.

But I do feel a little guilty right around now…”The Journey” is a new track for many of you most likely, but I’ve had the privilege of hearing that particular song a while back now while assisting on the video. That particular song, I’ve been grooving on for a while now…but I actually hadn’t heard the other tune on The Journey EP called “Deep Routes.”

And I don’t wanna accuse Sam Sky of holding out on me…but…but…”Deep Routes” is AWESOME – I’m surprised that he was able to keep it a secret from me for this long!

In some ways it’s quite similar to the groove in “The Journey” but it doesn’t take long before this second tune takes on a life of its own. Slowly doling-out the electro-pulses and gentle-waves of textural-synth, “Deep Routes” starts itself out with a very inviting and warm tone to the rhythm as it begins to build. It truly fits in cohesively with the way it starts nearly echoing the end of “The Journey” before it splits into its own dreamy atmosphere. What I wasn’t expecting, was the way that “Deep Routes” completely comes alive around the second minute and becomes much more than rhythmic-hypnotism – it becomes pure audio-joy!

The additional trumpet sounds…or synth-trumpet, synth horns…whatever they are…they are perfection. Nearly taking the entire tune straight into Dixieland, the melody is spot-on and the notes are freakin’ fantastic. However Sam has gone about securing this sound into his mix…he’s done a fantastic job of completely breathing an entire new life into the end of this song – and it totally pays off.

Sam’s a solid dude…great producer, great imagination and obviously talented on the mixing-decks. Drum’N’Bass people will dig it…the ambient crowd will love it…the electro people, they’re in too…lots of crossover appeal with what Sam Sky is doing and I’d always expect that was comes out of the speakers when this guy is involved will always be worth listening to.

Find out more about Sam Sky at his Facebook page: https://www.facebook.com/djsamsky