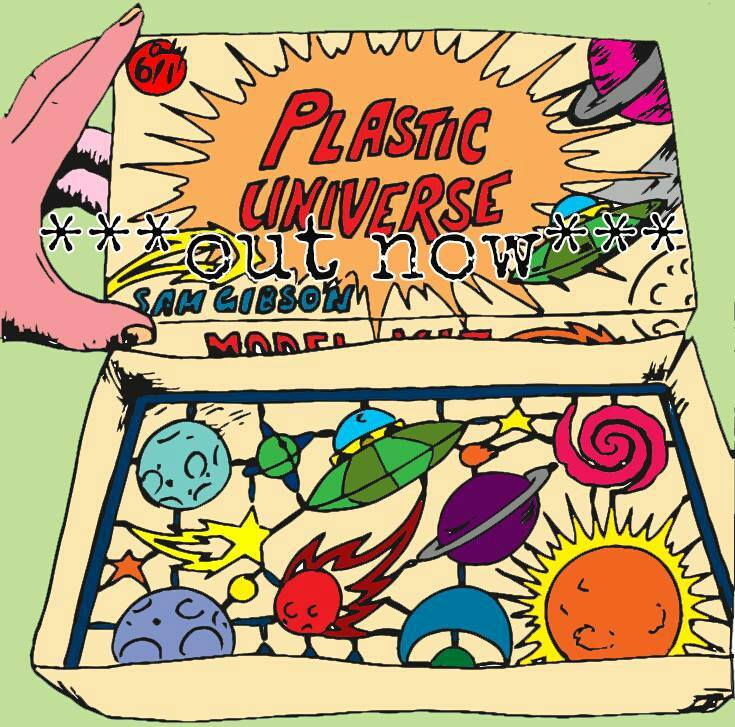 Right off the bat – that’s an album title that resonates with me strongly. With so many ideas recycled daily…almost like we’ve planned our own obsolescence…it can be tough to sometimes navigate through our valleys of malls and believe we’ve created anything significant here on planet Earth. And if we’re getting all-kinds of philosophical here, well, your universe would be the same as mine, in that Earth itself…is really your universe. Unless you’re one of the few lucky space travelers, this rock we’re on is what we’ve got…and arguably this thing is so packed full of plastic & hot air that it could float on water by now…

Beautifully played acoustic guitar gently eases you into this album through “Sunrise” the intro opener and into “Let Me Fly” the track to follow. You can hear easily that Sam has held onto his guitar closely his entire life and get the sense quickly that these songs are born inside him; each song sounds like he knows exactly where he wants it to go, and with his skill-set makes sure to get it there each and every time. “Let Me Fly” is a perfect example; Sam really lets loose a sweet and inventive vocal flow on this one that, quite frankly, sounds like he’s taking some chances in a sense at first…but following his instincts have paid off greatly for Sam not only on this track, but on this entire album.

It becomes all the more fitting when you hear “Be True,” the third song on this new album and one that really gives you some insight to what Plastic Universe and Sam Gibson are really all about. It’s a fantastic song about realizing the potential that’s inside you…it’s about never giving in to conformity, celebrating diversity and just GOING for it…whatever “it” may be for YOU.

“Starting off with an answer – is that the way to go on?” is such an excellent question posed by Gibson in “Be True.” I can only suppose he’s referencing the sheer number of how many things have already been and done in this world…and we’re all fortunate enough to stand on the shoulders of these giants and their work as we push forward ourselves. But that question he asks…well…it made me think! I don’t know if I came out with an answer myself either…I’ve always encouraged authenticity and music that is truly organic – but I’ve also always said that more of a good thing can be a great thing too. So is it the “way to go on?” Maybe, maybe-not…but that ability to question it all is certainly part of what drives Sam to be as unique as his creativity allows him all over this album and push himself to break away from becoming yet another plastic copy of anything else out there.

Of course there are moments that still show the roots of his influences – but a carbon-copy he most certainly is not. The passion in Gibson’s voice comes through completely solid on the fierce “Bitter End,” and especially on “Squeeze,” where you can also hear him fire up the electric guitar as well in this epic masterpiece. This track recalls some of the epic sounds of Peter Gabriel, or found in the present tense through bands like TV On The Radio or Bon Iver; melodic, beautiful…and just a massive song in scale. It’s tracks like this that allow you to visualize what an amazing song this would be in a live performance even from your armchair.

“Come On Through” will make for an interesting track to listen to for our Canadian readers for sure. With an early Murmur-era R.E.M. style to it, this track also sounds almost like a lighter version of our own dark & troubled artist Matthew Good. Whether or not any of these musical references have had an impact on Gibson along the way I do not know; but what I do know is that his own defining pop/rock style gives the right twist to any of these sounds to make them new and like musical tools entirely unto his own.

As an absolute sucker for sharp recordings, atmospheric-music and great ideas (Sorry, can’t help myself) – I’m a huge fan of “Nothing Here,” second to last track on the album; a short piece of wonderful pop confection. By giving it that touch of the vinyl record sound, a bare piano and a simple but completely heart-wrenching & emotional set of vocals…this track works exactly as intended through the recording. Not only is it a fantastic piece on its own – but with that extra vinyl effect on “Nothing Here” being so effective, the moment it cuts out for the final/title-track “Plastic Universe” is an incredible moment in listening all to itself. It becomes quickly silent for a split second before coming back into that same well-produced, beautifully-melodic acoustic guitar tones that brought you all the way here in the first place. You instantly snap back to just how well this album is made through its production.

“Plastic Universe” is another Gibson epic for sure. Acoustic and haunting in the opening before exploding into the true climax of the album, Plastic Universe as a whole, plays fantastically well…like you’re right there and in on this whole ride with Sam from the beginning…and you knew it would all lead to these explosive final moments that are sure to make this album memorable.

I think there’s a large comfort in that. On this album really. It sounds and feels incredibly close to you through its warm tones, melodic choices and a genuine feeling that Sam WANTS you to be right here with him, right now…

It’s the authenticity in Sam and his ability to genuinely communicate that’ll give you hope it’s not an entirely Plastic Universe after all.