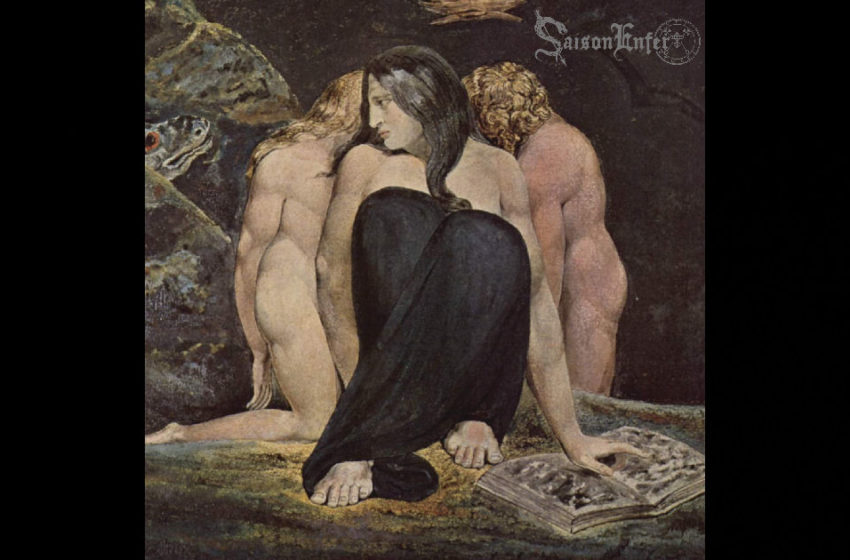 Alright…I can get behind this.

In fact, I’d go as far as to say they’ve got me listening…I’m interested in where Saison Enfer is gonna go with their music & career.  I mean, let’s face facts…it’s not every day that you stumble upon a Rock band from the UK that’s based their name on the work of a legendary French poet.  Or if that has somehow become the new norm, then clearly I’m not getting out of the studio enough these days.

I do think the people out there are gonna dig these guys though…whether that’s now or whether that’s later, I suppose it’ll be your choice as to when you wanna succumb & surrender.  Saison Enfer are still plenty new right now – I’m not going to argue against there not being room from this crew to evolve & grow, that’s almost always the case in every band out there, even the vets – and as many of you already know, when you’re at the beginning stages, you’re still after that identity and locking into the groove.  All that being said, even though it’s still early on in Saison Enfer’s quest for world-domination…the important thing is that the ideas are in place, they’ve got all the right pieces of the puzzle to succeed with the players they have in their band, and they’re clearly unafraid to get all out wild with their music.  These are the kind of things that show the spark that’ll turn to a blaze…the seed to a tree…these are the things we’ll remember when it comes to the experience with the Three Seasons EP, as listeners.  Saison Enfer gives you plenty of reason to believe in’em with the songs they’ve got on this record.

The more I listened, the more I felt like there’s real potential for this band to do something seriously damn cool out there.  Any initial hesitation I had or resistance came mainly from “Hex” – but let me make it clear, I still dig this song quite a bit too.  I ain’t gonna lie to ya dear readers, dear friends, I’ve got myself a favorite cut on this record – they make a significantly different move in how they approach it and I felt like it really brings out there sound perfectly…but we’ll get to that in a moment or two.  As far as “Hex” goes, there’s a lot to love…like I’m actually really addicted to the frantic rock-tremble & energy that singer Daniel Leons-Marder puts in here.  In fact, it’s taken me damn near two or three days to recall who it is he’s been reminding me of in the way he sings & sounds on “Hex,” but I finally did it – dude reminds me a ton of the guy that sang for the band Cool For August.  You can throw in some additional comparisons & references based on the sound of the song overall and where he’ll take it with the rest of the band…I could see names like Cold War Kids, Wolfmother, even Florence + The Machine coming out in reviews based on what you’ll hear in “Hex” – and that’s damn good company all-around.  Where Saison Enfer justifiably still has room to grow as they make their way & establish themselves in the scene, is in the tightness between the players of the band and their timing together; right now, you could look at it from that Rock-license for the freedom of expression and accept it, or you might end up wanting those tiny milliseconds here & there to tighten-up…it’s not just Saison Enfer that battles this, it’s more than half of Rock music and Rock music’s history!  Like I always say, what’s most important is that the ideas come through and the potential is revealed – and you get all that & more with “Hex.”  Great guitars throughout this opening tune, and they’ve written memorable vocal hooks here too…the bass probably gets the unsung hero award here…listen closely, you’ll hear the man is kicking ass back there, it’s just a bit beneath the surface of the rest of the song, where you’ll usually find the bass-man.

That’s Hagley West laying down the smooth cool in the opening of “Beverly” on the bass there – that should be more than enticing enough to bring you in.  I think several things here – I think that the timing’s much more adhesive to the metering & flow of this second cut…I think I probably like “Hex” a bit more as a song overall by comparison…I think that “Beverly” does kind of sound like a band that’s still searching for that sound they’re looking for, or determined to become that hybrid bridge between.  You’ll see from their pages that Saison Enfer makes no bones about their 70’s influence…and you’ll hear that for sure.  In the case of “Beverly,” you can’t help but hear the 80’s influence creep in at times as well…so like…think of it this way, I’d still stand by the comparisons I made to other bands from the mainstream in talking about “Hex” – but you’d combine that with like…The Kinks & Van Halen here too.  So flashier guitars for sure…but I mean, give this band some credit, they wear the suit well; all I’m saying is that in terms of establishing the band’s own identity & sound, I’d probably argue that the opening track “Hex” and the final cut “Harlot Hotel” will go a lot further for them in that regard.  “Beverly” has a lot going for it in the sense that it never remains in any one section of its structure too long…there’s quite a bit of flexibility & versatility in the way Saison Enfer moves through this song that keeps it more than entertaining, fun, and hell…probably even fist-pump worthy for quite a few of you out there.  I do think that on the whole, this band from London has definitely got a unique star in Daniel Leons-Marder; playing inside the Rock genre is a tough one to stand-out in…it’s in listening to how he performs, sings, and all-out entertains in his approach to the microphone on songs like “Beverly” that confirm he could likely take a good song into a great one at any given moment, just by shifting the tone or energy of his voice.  Like the switch around the 3:40 mark of “Beverly” – what a freakin’ killer moment in time and stunning execution on this breakdown in the song, leading into the solo, and most inspired run-throughs of the hooks to follow as Saison Enfer takes this cut to the end.

And so here we are…I’m not gonna even remotely try to hide it, I think this is Saison Enfer’s best cut – “Harlot Hotel” at the very end of the EP.  Like I said early on in this review, there’s a huge reason for that – Saison Enfer makes a whole bunch of massive switches in direction & sound here – it’d be nearly impossible not to notice the difference in “Harlot Hotel” in comparison to the other two cuts.  Most of that, is in the vocals from Leons-Marder…he’s more up-front in the mix here than the distant reverb-laden approach that dominates the sound of the first two songs – not only does he end up sounding more present and locked into this vibe, but they also chosen extremely wisely with the effects on his vocals.  And no – I’m not saying the dude needs to mask his voice in an effect – he can clearly sing with the brilliant innovation & unique sound that makes the difference and you can hear that right from the drop on “Hex” when he first takes the mic!  What I’m saying is, they’ve found the right gear for “Harlot Hotel” – they’ve made a bold choice in this switch of the main vocal sound to suit what the song needs – and that’s ALWAYS the right decision.  Doesn’t matter if the people out there catch every word or not – that’s what the repeat function is for & why we listen to songs more than once…singers can be so much more than mere words and Daniel does an extraordinary job of proving that correct, song after song, raising the stakes & standards one last time right here at the end of the EP with “Harlot Hotel.”  And like, LISTEN to those drums from Rami Cheblak will ya?  They sound gigantic and help create this mysterious & haunting beginning to “Harlot Hotel” alongside the brilliantly distorted vocals of Daniel; great crunch in the sound & guitar melody from John Evered here too.  I mean…honestly…what’s not to love about this last cut?  Saison Enfer is stomping & storming the earth with this final track, really diving deep into the depths of “Harlot Hotel” with such impressive commitment & stunning songwriting that there’s no question they ended this EP on a massive highlight & reason to believe they’re completely on the right path.  I’d also like to note…”Harlot Hotel” is just ten seconds shy of a seven minute tune…and there wasn’t a time that this cut came up that I didn’t look forward to hearing it again on my playlist here – Saison Enfer embraces the wildest idea and most memorable melody on this final track of their Three Seasons EP, relentlessly entertaining us now and strongly hinting at the potential for what’s to come.

Apparently we’re well ahead of the game on this one…the Three Seasons EP by Saison Enfer doesn’t come out until April 9th this year – BUT – that’s only a couple weeks away at this point.  And here’s the even-better-news for those of you out there in the UK…on that same very day, they’ll be ripping it up on stage at the Water Rats in London to celebrate – so get out there and support these guys!  Guaranteed they’ll crush these cuts live – I listen to a cut like “Harlot Hotel” and I ain’t lying…I just wanna see that happen right there in front of me while standing shoulder to shoulder with a whole bunch more people that get it…that song alone right there is what music is all about to me.  I bet it’s an epic highlight of the live set just like it was here on this record.  Anyhow…if you’re out that way in London, do the right thing and get out to a show!  Saison Enfer is fully ready to Rock – and they prove that plenty to ya throughout this EP.

Find out more about Saison Enfer at their official page at Facebook here:  https://www.facebook.com/saisonenferofficial