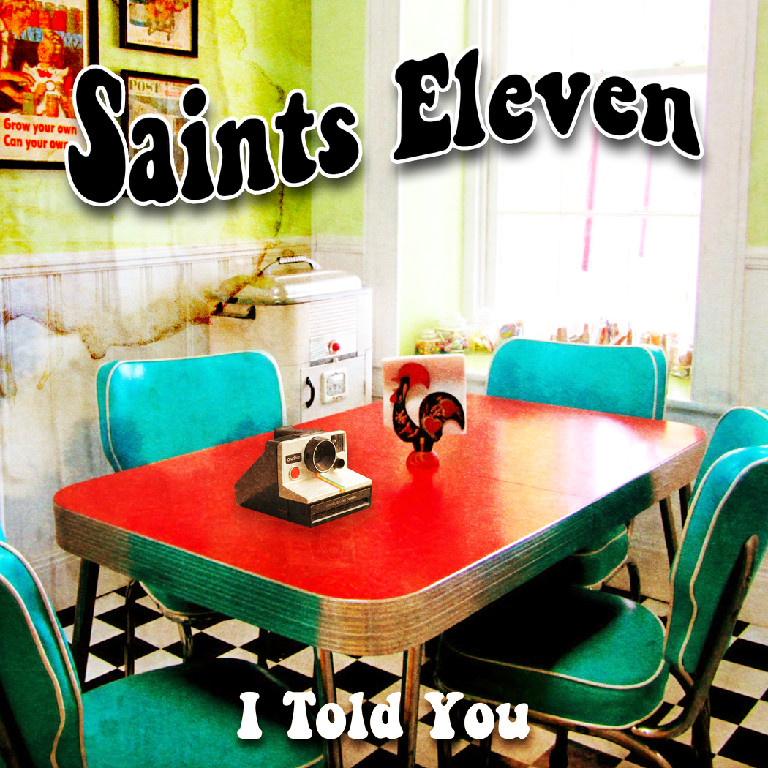 Well…if there’s definitely one thing I can tell you, it’s that the album you’re about to hear about from Saints Eleven is so true to the rock-country music genre – the REAL one, not the modern-pop version; so genuine and authentically played I can all but guarantee this would drive many of our rock-metal fans completely insane. This is the real-deal as far as traditional country is concerned, make no bones about it; but I’ve always said I’ll listen intently if I can hear you believe in your material, even if it’s outside of my own typical genres or styles of music. I like to think a lot of the rounding-out of my own musical knowledge is because of that commitment…and I think that, to a large degree this is what makes us special, and different. We support music, of all kinds, natures, shapes and skill-levels – and you’ve now heard it directly (Well, ok, you’re reading it but I’m SAYING it from here in my chair…) from me – Saints Eleven are completely welcome here.

I Told You opens with a classic country fiddle, and the tales begin. Loves are lost, monies & beers are gone, wives have left and dogs have begun to run away…ok, ok, ok…I’m fanning the flames of country mythology rather than factually reporting. Loves are lost during the opening track “Turns To Rust” – we’ll check on the status of the family, family dog and beer situation as the album plays on through…keep you updated, promise…

What I can tell you, is that lead-singer/guitarist Jeff Grossman was BORN to sing country music. If there’s one thing beyond any other on this entire album, it’s the perfect delivery in the vocals of Saints Eleven. Listen to the track “How Long” and how he draws out the words in his signature country-drawl; there’s no question here, this is natural talent and ability on display her; and Jeff is clearly making the music he loves to hear the most.

And there’s much more to continue loving about this country act than just the amazing beard on bass-player Jeffrey Mosley’s chin, though it does warrant having its own dedicated sentence. His bass parts are perfectly played, and the rhythm section between himself and drummer Chris Bradley is fully stocked with all the heart & skill you need to really hold it all together. Much, much credit also to their dedicated and incredibly-skilled fiddle player, Michael Poole, who has an immaculate touch & feel for the music of Saints Eleven and is truly an integral part of the music overall. Listening to songs like “How Long” and “Down The Road” and you’ll hear exactly how essential Michael’s sound is to Saints Eleven.

I am however, extremely disappointed in myself that I can’t right now figure out the damn song where this guitar line has been yanked from… It’s so familiar…I swear I’m gonna get it by the end of this review…

“Just For Tonight” has a familiarity to it as well…but maybe that’s just the comforting aspect that comes in with this song. Of the four I’ve experienced up to this point, this has been the most engaging for me as a listener. Stripped of the rock-aspect of the country and Saints Eleven, focused here on a slow ballad, come out clearly and beautifully as they take on this sweet track. There’s still sorrow…there’s still trials and tribulations and obstacles to overcome thematically…I mean, hey, it’s country-music…thematically not a whole hell of a lot EVER goes right for these characters they write about, so to have a LOT of good times going with the bad times in this song…well, I’ll take it when I can get it!

With a ZZ-Top like “La Grange” style of a song, Saints Eleven pulse into “I Don’t.” The classic rock-roots of their influences outside of country show right through on this track…something that, were it not for the fiddle sounds and Grossman’s voice once again, could fit in right as easily with Steppenwolf, April Wine or Joe Walsh. It’s a good song, again, closer to the rock-side of country here…but to me, I like this band best when they sound like Saints Eleven and no one else. The following two songs are the perfect example of what I mean; “Old Friend” and “Hungover” are much more authentic to the sound of Saints Eleven. There’s a little bit of a ‘formula’ to any kind of music; it’s how we all know what genre you’re playing in the first place, but these songs work well to get them past the basics and leave an impact with those listening.

What’s THIS? Saints Eleven have you been holding out on us? “A Little Time With You,” is a great song. Reaching for an almost Joe Cocker-ish style of a song; this is like the perfect combination of blues-rock and country together, and assembled tightly into a song with a strong pulse, rhythm and groove. Carrying that strength right into the final track, “Stone Free” starts out gently before hitting their rock-country vibe in full stride as they end off the album on an extremely confident note.

It IS country through and through…make no mistake. I think rock fans with a tendency towards the lighter-side can find that crossover potential here, but it’s always a tough battle to win over new fans outside of the genre when you play this true to the style. That being said, it’s clearly an authentic sound made by four musicians that care deeply for this sound and have made every effort to put it out with maximum conviction. Played convincingly throughout I Told You, these guys have certainly put forth a valid effort in making me a country fan with their excellent ideas and obvious talent on this latest album.