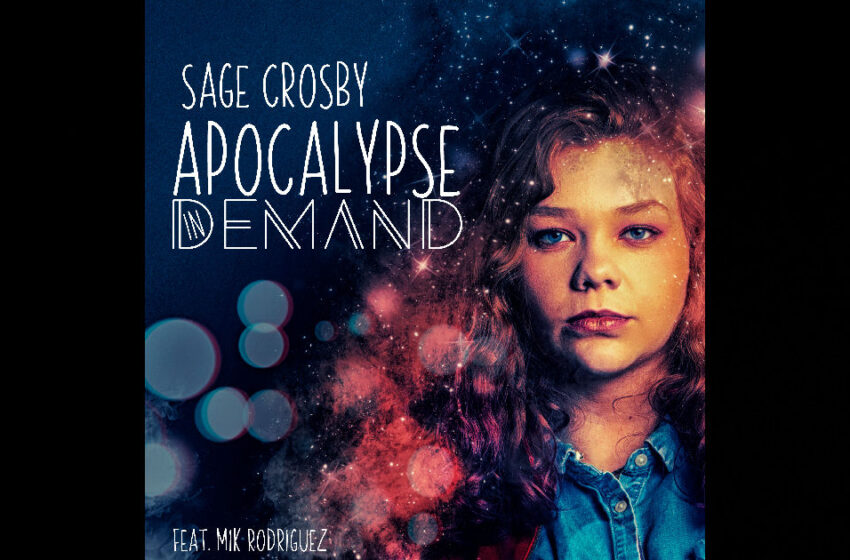 Well now…this is bloody brilliant, is it not?

If I’m being 100% truthful with ya Sage Crosby, you had me from hello, right from that very first sniffle so cleverly included at the very beginning of this song, before a note had even yet to be sung.  Unique choices are always something that stand out to me – and as small of a moment as that is, that instantly stood out for all the right reasons.  It tells your ears immediately that Sage is REAL and authentic; that’s a moment in a song that just about 99.9% of all artists out there would be TERRIFIED to even consider including to begin with – and yet, here’s the verifiable proof of its impact and the endearing way it’ll charm you into listening so quickly.  Start to finish, “Apocalypse In Demand” is all-out spectacular; to the point where, even just picking out a few highlights among all that there ARE, becomes seriously tough.

Let’s start with the absolutely incredible songwriting at work here, which is found certainly both in the music, and in the words – this single is the complete package.  Quite honestly, I literally don’t even know where to start.  Sage is a fantastic singer, that becomes immediately clear from the moment she sings her first line…there would be comparisons that could be made to innovators like Ingrid Michaelson or even the almighty Regina Spektor when considering the depth of the poetic lyricism and piano-based melody found in “Apocalypse In Demand.”  What’s undeniable, to me as both a writer and a listener, is that these are words that stand out for all the right reasons; they’re thought-provoking, considered, measured, and stunningly poignant.  Crosby’s got a massively moving, single-worthy tune, that absolutely nails so much of what we’ve all been experiencing collectively on this planet we share over the past several years, and arguably much longer.  Pulling no punches whatsoever, Sage fearlessly expresses the truths we know deep down to be facts, whether you’re one to readily admit them or not, what she’s singing about is objectively real at all times.

“Apocalypse In Demand” ends up ultimately kind of turning the mirror back towards us in the process – sure she’s turned the spotlight brightly onto so many of the systemic problems affecting & afflicting us – but ultimately, make no mistake, the purpose & intent of a song like this isn’t simply mere entertainment – it’s got purpose.  You could look at the value in the social commentary and how it creates awareness…you could hear these words and they might very well feel as intense as an alarm snapping you back into reality…you could understand this to be the call for change that it genuinely is.  By asking the most important question of all after a flurry of societal inequities & brutal deficiencies in how we interact & function as humans have been revealed – Sage will sing, “Is this how it all ends?” – and you gotta look at that like the neon warning light it truly is.  Because it WILL be “how it all ends,” if we LET all these horrifying realities continue on so unnecessarily, or don’t put in the efforts required to bring about the change we need.  2021 is off to a much better start…I gotta say, I’m hopeful right now.  Even just knowing there are young artists like Sage Crosby out there ready to battle for the future we want, and that there are leaders out there like her capable & willing to speak their minds through art & music…believe me when I say, it’s stuff like this that helps me sleep much more soundly at night, knowing there are people with integrity, honor, and pure intentions on the watch on our behalves.  And as much as I’d love to simply hit the snooze button to get a bit more outta the Sandman & all – its songs like these that inspire people like me to get the heck outta bed and be the best versions of themselves, if only in defiant resistance of so much of what is being outlined in the details of “Apocalypse In Demand.”

As impressive as the words themselves are – the design of the melody, and how these complexities all end up fitting into the melody so fluidly, smoothly, and confidently…well…it’s nothing short of brilliant.  I could go on and on about this song for days…lyrically, you could pick ANY line from this song, and trust me, you’d be impressed – but rather than write it all down for ya here, I encourage you all to listen & listen closely to what’s being said, what’s being implied, what the intentions of a song like this are, and then act on it.  Get involved…find a way to do your part, whatever that may be – we’ve got tomorrows to create here folks, and it’s up to each and every one of us to determine what those are gonna be like.

Notably, you’ll also see this cut features Mik Rodriguez, who co-wrote “Apocalypse In Demand” with Sage – and just happens to have been in a lil’ band you might have heard of on our pages before – the legendary This Is Decibel, who went on to win our Best New Sound back in 2018 at the end of the year.  Dude knows his way around a great song, that much we already know to be completely true based on the music he’s made himself – and hearing how well-rounded out this new single from Crosby has come out, continues to speak strongly on behalf of a guy that’s genuinely built with the right mettle to help move the whole music-scene forward, inside & outside of his own career.  Respect!  I’d suspect that’s likely him rippin’ it up in the thick of the finale on the ol’ guitar as well.  While all us folks outside of the process rarely if ever know who exactly wrote what or contributed every part of any given song – what I can tell ya about, is what works 100% – and this single is a highlight example of a perfect collaboration.  The balance in “Apocalypse In Demand” might even be its most impressive aspect, even after all the amazing things I’ve already mentioned!  Listen to how we all essentially get exactly what we were hoping for & more in the melody & performance of the song’s first 2:30 – and then make sure you got those headphones strapped real tight to those ears of yours, and be prepared to be blown away with the incredible creativity and artistic collage of samples & sound that’ll fuel the fire in the final ninety seconds.  From the original insights that Sage so beautifully sang about in the first half, to the proof she wasn’t just creating fiction by using authentic samples that highlight exactly what she’s been getting at – “Apocalypse In Demand” is straight-up breathtaking to jaw-dropping with little to no space in between.

And I’ll admit…a single like this certainly makes me curious about hearing MORE, no doubt about that – so of course, I peeked into what I could find.  Sage has apparently been amazing for quite some time already…not too long mind you, looks like she’s been on the scene, or at least on Spotify since around 2018 or so.  in that same year, she put out a single called “42” that instantly confirmed to these ears of mine, she’s always had the magic in her, with perspective and a voice fully capable of moving hearts & minds.  Word on the street is that she’s got a brand-new single called “Stay Aware” ready for release on what looks like February 10th this year – and after everything I’ve heard from Sage Crosby already so far, you better believe that date is circled on my calendar.  I’m absolutely impressed in every way – she’s insightful, sincere, and 100% stellar all-around.

Find out more about Sage Crosby at her official page at Instagram here:  https://www.instagram.com/sagecrosby