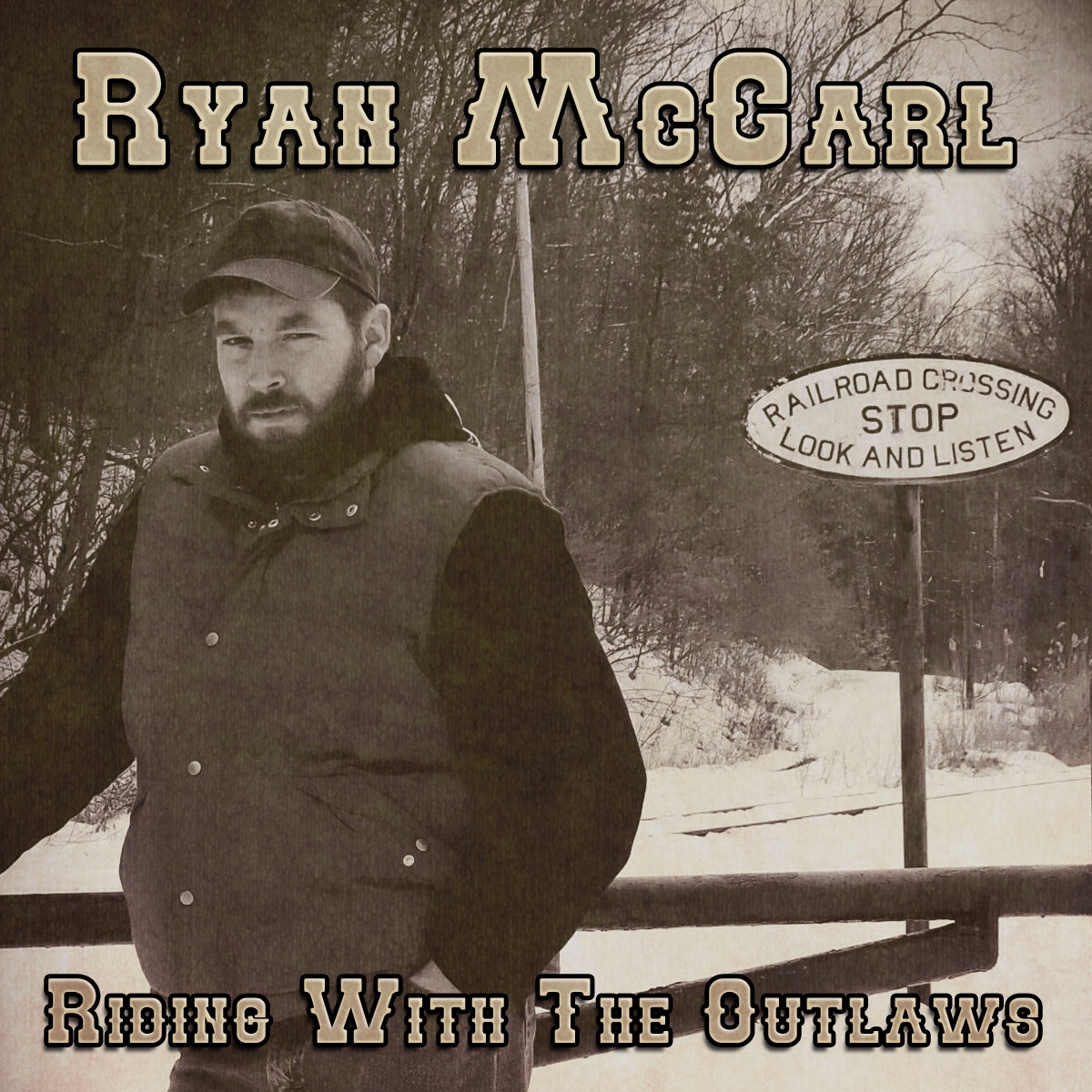 What a day here in British Columbia, Canada…I had to completely re-write my intro for this article after starting this up earlier this morning, only to end up one of 200,000 victims of a brutal power-outage throughout the lower mainland. It lasted nearly six or seven hours here at the studio…were it not for an acoustic guitar and an altogether way-too noisy & demanding cat, there wasn’t any music or sound going on here at SBS…not even the typing fingers on a keyboard…nothing. The power is back on, finally – and now I can process these thoughts of mine gathered on Ryan McCarl’s EP Riding With The Outlaws and put this out there on the page before I go through some weird internet withdrawal…

Now…there’s a couple of things that are working slightly against me going into this review aside from the weather catastrophes; one being that Ryan’s genre in the loose, acoustic-rock Americana/Country music style is about as far removed from my own playlist as one could get…and the other is that I’m not quite certain what the actual track-listing IS – so we’re going to go with good ol’ alphabetical order as we head through this set from Ryan.

Knowing the style somewhat beforehand, before pressing play…I have to say it was actually quite interesting to pop open the playlist with “Common Man” and find something that resembled sounds close to the feeling I got when first listen to the Sap EP by Alice In Chains. Repetitive, simple & clean, the acoustic rings through brightly…the chord changes sound beautiful like a new set of strings full of tone. Vocally…Ryan’s missed this one almost entirely…he’ll have moments that make up for it later on throughout the EP, but as far as this one is concerned, he’s pulling back in all the moments he should be letting it go freely…and I honestly think that restraint costs him several times while searching for the tone he’s after.

“Damned Old Blues” draws on a standard & timeless melody from the wagon & cart days…this is the kind of song that makes things really tough to examine as a reviewer. On one hand, Ryan’s performing this one more confidently and solidly through the vocals than he had on “Common Man,” and on the other hand…the music hasn’t really suffered so much as it would be nearly impossible to do anything new with this melody. I dig the strings, I dig the guitar solo…I think the song would have benefitted greatly from a little low-end bass helping this one diversify a little…yeah, I dunno…this one’s a tough one. I appreciate the performance more than I do the writing…I suppose I can put it that way when it comes to “Damned Old Blues.”

Where things began to turn around for me was with “Feeling Blue.” Right off the bat you can hear this one is recorded completely differently…almost the way that Beck used to record his early work. The Headstones, who actually have a similar sound in their lighter-moments to what Ryan McCarl takes on, they’ve got a couple of tunes that are minimal like this too…but I don’t know that anyone has recorded anything with quite this much style in the production for a while now. Genius stuff really…and you can totally hear how this is no accident by the crystal-clarity of the guitar solo that creeps in halfway through. An earnest love-song through the lyrics…it walks a fine-line of being similar to Badfinger’s “Baby Blue” in the chorus…I think Ryan’s alright here…but who knows in 2015, the year of ridiculous musical lawsuits and stretched comparisons!

I would say that even the instrumental “Hillbilly Jam” resembles melodies from music’s past in familiar ways yet again, leaving me to wonder how much of Ryan is in these tunes as opposed to it all just being played for the love of music. I think “Hillbilly Jam” came out really well-played, really clean once again…but maybe at this point I also feel like I’m really curious as to how Ryan might make that necessary impact & become memorable with many songs sounding like the audible form of seeing a long lost friend. You don’t want to join the familiar yet forgettable.

These final two tunes in the order I’ve got running here allow Ryan to let loose a little more. “Nothing Left To Say” still sounds like he’s holding back just a little…it’s quite possible that the reason that is might be that he’s playing and singing at the same time…I can’t be sure of that, but that’s what it sounds like might be the case to me. Dig the train-whistle, dig the performance…song is not my thing personally…I’ve always had a tough time with songs that have that last line in a chorus ring out into nothingness before bursting back into music. Not Ryan’s fault…I’m pretty sure it was some sort of car commercial or BBQ-sauce commercial that ruined this style of music for me long, long ago.

Where the order I’ve got really paid off for McCarl, was that I ended with “Raise Em’ Up” – this song kicked a whole bunch of alt-country-rock-blues ass and put me in a great mood as the EP came to a close each time around. Still a somewhat familiar feel…you can’t fault Ryan for playing the music he clearly loves to play – and although he’s still a little restrained on this final tune…this time it fits, serves a purpose and sounds great. Taking a moment to bash on pop-country music…can’t say I blame this outlaw…the music Ryan’s making is a hell of a lot more real than anything that genre has put out in a decade. It’ll be interesting to see where he chooses to take this all to next…whether he’ll stick to the standard or start to explore new territory. I say this because I think there are songs like “Feeling Blue” that display some real flair for texture in sound…and that new territory might not be something Ryan should doubt so much were he to head more towards that. In fact, I bet he’d end up on completely solid-ground standing firmly on his own without the shackles of any existing influences…time will tell!