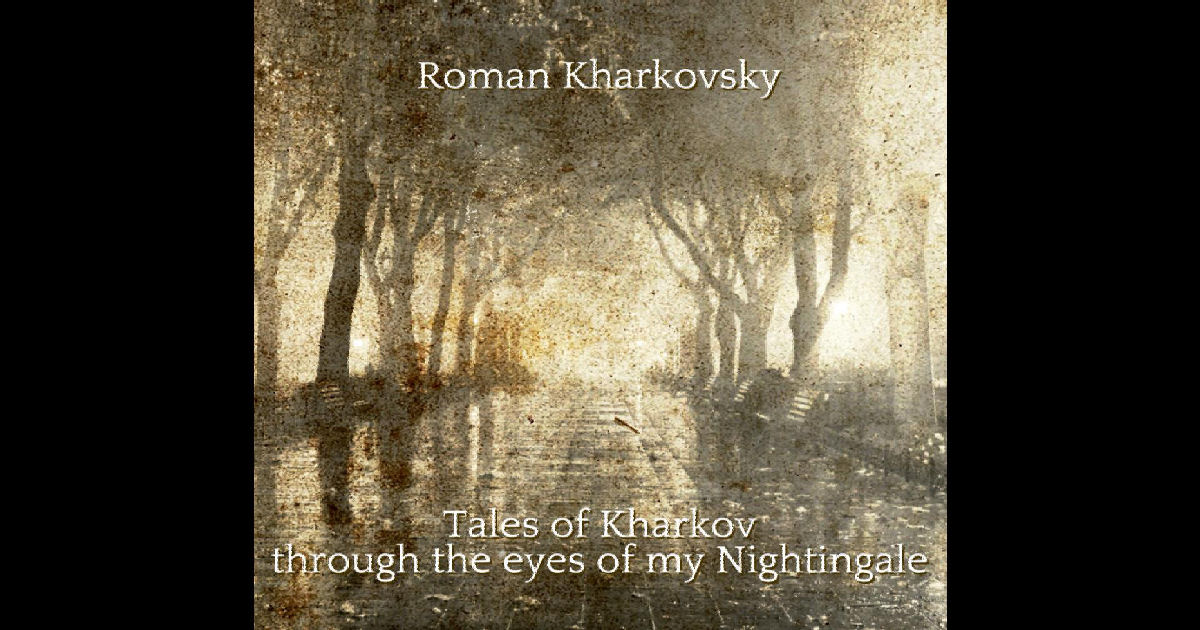 Welcome to the mysterious soundscapes, dark ambient music, & experimental sounds of Roman Kharkovsky!  Over six cuts, Tales Of Kharkov Through The Eyes Of My Nightingale is almost double the length of a Weezer album, packing in nearly fifty minutes worth of bizarre oddities strung together in imaginative, innovative, and often haunting structures.  I dig ambient stuff like this personally…while a lot of people out there figure the genre is meant to be something you can have on in the background while you study for your next term paper – when it’s done like Kharkovsky is doing it, you tend to listen a little more closely and give it your full attention.  Because nothing is typical in this upside down realm; while it’s definitely still a part of the ambient genre…a slight aggression & tension hangs in the air.  As a result, you give these tunes more of your attention willingly…it steps out of the role of background noise and becomes an album full of experiences you couldn’t possibly duplicate…once in a lifetime moments.

The record begins with “Marching To The Blue Gates Of Kharkov (Chapter I),” as the sounds start to creep in eerily, filling the atmosphere with trepidation and anxiousness…especially on that first time listening because you really don’t know what to expect coming up.  Thankfully it’s not like Kharkovsky chooses to blast you into the next room by going metal or anything like that – but that verifiable tension in the air that you could cut with a knife sounds menacing and enveloping, like shadows in the darkest of the back alleys you could possibly stumble upon on your way home.  The sound remains remarkably chilled out, and even at its most intense, that tension remains the most prevalent feeling you’ll get when listening to “Marching To The Blue Gates Of Kharkov (Chapter I)” – you can practically feel this song slide right down your spine.  Production is top-notch all-around…not only is what you hear incredibly interesting to listen to, but the clarity is there to support these ambient ideas…the results are seriously captivating as the vibrant texture of sound pulls at your curiosity to listen even closer.  At its most chilled – it’s seriously haunting…at its most intense, it’s entirely gripping…like I said, it’s definitely not the kind of ambient music you can just ignore…nor should you want to – it’s awesome to explore sound like this.

Roman continues to experiment and dig deeper into the bizarre at the beginning of “The Kharkovian Souls Warmly Welcomed Upon The Blue Sun Eclipse!” – he’s got sounds bouncing from the lefts & rights of your speakers like audible springs jumping throughout the song.  You gotta admire production like this – it’s those smart choices in the movement of sound that Roman creates that certainly lead to retaining our interest.  Like a growing storm, the atmosphere of “The Kharkovian Souls Warmly Welcomed Upon The Blue Sun Eclipse!” continually swells, expands, and threatens as it summons its strength, before finally breaking around the fourth minute to transition into more subtle terrain.  Loved the choices in sound around this part of the song…it’s brilliantly used and reminds me of like…you know how when you see a live electric cable dancing around and sparking-up all over the place and how cool that is to watch?  It’s like that, only a whole bunch of them, & to listen to it happening rather than see it.  Really awesome switch in this second cut and great ideas in both its main halves – I was already enjoying myself from the beginning, but by the end I really felt like that second half brought it home even harder.  It just all gets so impressively colorful and gloriously filled-in with sound…which I know, I know…it’s not what you’re likely expecting with music that could fit into ambient-anything, but that’s the Kharkovsky style.  He’s making ambient music that your brain can truly chew on with structures that almost dare the listener to go on, just to see if you can really absorb the full weight of what’s happening in these tunes.

Where things went extremely right as far as my ears were concerned, was on “Sleeping With The Winds That Lie Above The Clouds Of Kharkov” – this is remarkable ambient in every way.  Much closer to the true definition of the genre you know, the experimental aspects of the previous tracks dissipate into the wind and the whispers of sound that come blowing in on this third tune.  At nearly eleven minutes in length, the subtle shifts in the tone & atmosphere of this song deserve some massive credit – I’d argue that you get an extremely insightful blend between worlds here, with a haunting mix of enchanting beauty that contains both dark & light energies contrasting yet complementing each other perfectly.  Now – I’m no fool…I know I’m not everybody…but I could let this play for DAYS people – I love listening to stuff like this.  I love how at times the whispers in the wind sound somewhat devious or sinister, and how at others their exquisitely beautiful & inviting, even comforting at times…to me, there was a startling amount of emotion & expression in this song that was straight-up fascinating to listen to.  I have no doubt whatsoever that most people out there will only hear the sound of wind blowing through their speakers if they’re not listening closely…so I fully recommend that you do…because buried within the subtle layers of “Sleeping With The Winds That Lie Above The Clouds Of Kharkov,” Roman is revealing a masterful grip on the art of sound and his gift for composing music that engages the mind.  Who knows what he was thinking about when he created this song, if he knew what he had or if he knew where it was really going to lead him…what I can tell you is that this is the kind of cut that’ll send you blissfully into your own thoughts and you’ll feel that personal attachment to the sound of what you hear.  Almost like you’re hearing what nostalgia or memories would sound like by their definition.  Do I expect everyone out there to ‘get’ a track like this?  No, of course not – but neither does Roman.  You don’t end up in the ambient/experimental genres without already coming to the conclusion that the art you create will be understood by everyone – you do it because you love it.  For what it’s worth – he’s certainly got me listening – I loved “Sleeping With The Winds That Lie Above The Clouds Of Kharkov.”

Tales Of Kharkov Through The Eyes Of My Nightingale continues on with its two shortest tracks back-to-back, “The Dance Of The Wind Serpents Above Kharkov And Below The Sun-Summer Festival” and “Ceremony Of The Serpents In The Red Fog Next To The Red Gate Of Kharkov,” each individually still over five minutes in length and quite the adventure combined.  Side-note – anyone else notice that just listing the titles of these tunes & this record seems to have this review writing itself?

Where was I?  Right.  “The Dance Of The Wind Serpents Above Kharkov And Below The Sun-Summer Festival” makes use of that electrically-charged beginning, once again sounding like a live-wire in action as the drone begins and the song starts to take its shape.  Clever stuff happening in this cut…Roman’s got like, a full layer of action happening below the surface, like you can hear the beat of a club coming from the next building over.  Smartly fading this effect in, it never breaks the surface, staying brilliantly muted and subdued, while all kinds of interesting textures & sounds remain active in the forefront.  The results are hypnotic and sincerely engaging once again, pulling you in close to hear the way this structure moves in its slow-burning intensity, using its repetitive nature as an advantage while the rest of its elements continue to float, soar, & sparkle throughout the atmosphere.  The added benefit of a more tangible & discernible melody will no doubt lead many people to this track through its more accessible sound…Kharkovsky’s not gone & made a radio-hit here mind you, but this approach will likely lead this particular song to a wider audience than some of the more niche styles & experimental ideas.

I also think that melody plays a role in the beginning of “Ceremony Of The Serpents In The Red Fog Next To The Red Gate Of Kharkov” as well.  Though this track goes through some of the most extreme changes from how it starts to how it ends, “Ceremony Of The Serpents In The Red Fog Next To The Red Gate Of Kharkov” has a low-end set of subtle bass-lines that begin to take shape after the first minute and rhythm in the crashing sounds surrounding it.  You end up in a completely rad mix of hypnotic drone and inventive grooves that take over for the next couple minutes or so after the song has its chance to fully build – and then almost as soon as you’re there, entering that third minute, Kharkovsky pulls the rug out from underneath us all and transitions into spacious ambient and a low rumble of mysterious sounds.  Another example of how much you think you’re already enjoying yourself before Roman makes another brilliant switch to raise the stakes; I think that the first half of this song is kind of enticing to the ears by default of the boldness in sound – but I think the second half makes its impact even more impressively through the use of space.  Roman’s got a great way of tying ideas together to create exceptionally unique experiences that you’d never be able to predict – I dig that.

Find out more about Roman Kharkovsky at his official page at Facebook:  https://www.facebook.com/roma.kharkovsky/

Tags: Album Roman Kharkovsky sleepingbagstudios Tales Of Kharkov Through The Eyes Of My Nightingale