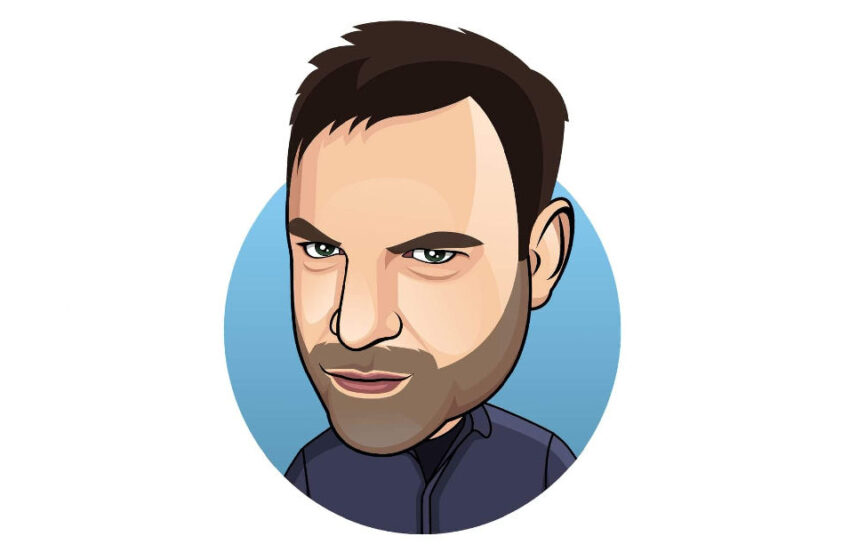 “Despite all the lunacy, a sense of community…”

That quote right there is one of several you could easily pull from this rad underground gem created by Rick Irregular And The Kitchen Sink.  As much as I’d love to sit here and let him write this intro for me by printing his own words to be read – it’ll be better if you hear’em for yourself, rather than read’em.  Suffice it to say that, you’ve all heard me say on these pages of ours many times that, ‘if it’s right, it’s right’ in reference to things falling into the place inside a song…and let me tell ya folks, if you somehow find yourselves in a position where you can sing out a line like “In Column Miscellaneous” as one of the main hooks in your writing & music…well…you simply don’t throw something like that away, ever.

Having grown up on The Cure and having them end up in my top two favorite bands of all time for as long as I can remember…sure, it made me smile to see the band listed in the influences that have been compared to Rick Irregular And The Kitchen Sink in the past, along with many other Post-Punk heroes.  That being said, to read about an influence is one thing – to hear it executed so brilliantly is entirely another; and once you hear the bass-lines rumble in & rhythmically surge throughout “In Column Miscellaneous,” if you’re as much of a fan as I am, you know exactly how much time Rick has spent listening to The Cure based purely on the roots of respect you’ll hear in the way this one instrument alone is being played on this single.  Combined with the other elements Rick Irregular And The Kitchen Sink have going on, you start to infuse that classic vibe with more modern acts akin to The National & The Editors…all sounds that are highly related and always to be found on my playlists somewhere.

The cleverness you’ll find in the composition, musicianship, and structure of “In Column Miscellaneous” runs deep throughout the new 2020 record by Rick Irregular And The Kitchen Sink called The Litany Lament, which contains another fifteen cuts along with this single and is out & available online now.  I’ll put it to you this way – I’ve had the good fortune to have listened to the album several times myself, and I can confirm you’ll find lots to love – but even on a visual level, you can see that this project has got more than meets the eye going on with titles like “Non Contact Sports On Eurosport,” “Rise Of The Furbabies,” “Five Urinals On The Wall,” and this shiny single here, “In Column Miscellaneous.”  Even if you haven’t heard the full record for yourself yet, you can clearly see that there’s uniqueness goin’ on here in Rick Irregular And The Kitchen Sink, equally implied of course through the moniker of this band.  It’s the kind of smart & subtle moves that get noticed though; being here to talk about “In Column Miscellaneous” and then seeing all these amazing titles & so many songs, loving what I heard in the cut I was listening to…I mean, if you’re REALLY a fan of music like you say you are, that’s your cue to check out MORE ain’t it?  I love what I’m hearing in this single from the lyrics to the music to the vocals – every band I could think of in naturally drawing comparisons to what I was hearing was like creating a mental checklist of so many of my favorites from throughout time; I’m a massive fan of the way that Rick Irregular And The Kitchen Sink have put just enough of a modern twist into the Post-Punk vibe to make it extremely relevant for the right here & now.  Essentially, “In Column Miscellaneous” gives you a whole lotta what you know you love while also pushing the potential & scope of the genre further creatively in what generates its hybrid sound…not only does this single hold up strong now, but it will into the future.

Timeless vibes & a timely video – Rick Irregular And The Kitchen Sink will join in on the mask debate with the quirky visuals flowing throughout “In Column Miscellaneous” keeping you completely entertained while the compelling & gripping sound you’ll have surrounding you through your speakers continues to smolder & rock.  It’d be hard to argue against a cut executed with such remarkable ingenuity on display, & you won’t find me doing so; you’ll find me doing nothing else but turning it way UP where it belongs.

Find out more about Rick Irregular And The Kitchen Sink from the official homepage at:  https://rickirregular.com