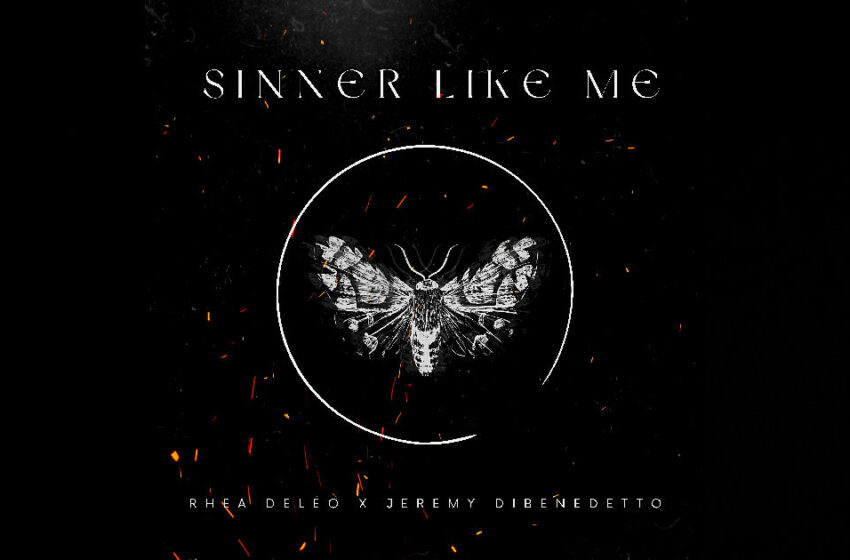 I’ll admit…I’m not exactly like everyone when it comes to listening to music, and probably even less so after a decade of writing these reviews I write I’m sure.  I don’t mind when a song doesn’t quite grab me for every single reason under the sun on a first spin – heck, sometimes I like to be convinced this this point; I’ve learned a lot of my favorite cuts, EPs & albums often don’t even gel with me as automatically as I might like them to.  I’m sure you’ve at least encountered that experience yourselves once or twice – you know…those times where you put on that new record by an artist/band that you’ve always loved, only to be unsure about everything you’re hearing…at first…and then a week later, you’re fully addicted to it.  I’ve learned that it’s okay not to be sold on that initial spin…even if you can hear the right pieces are all where they should be, and that’s very much how I felt about this new single “Sinner Like Me.”

Because don’t get me wrong…you can hear this duo’s got serious skill for sure.  DiBenedetto is a solid player, and Deléo should pretty much blow your whole mind with the talent she’s got as a singer.  For myself personally, I think a lot of how I felt about “Sinner Like Me” simply came down to content…the song itself, isn’t all that particularly new, even though it’s just been released, you feel me?  I always find there’s a massive difference between words you can feel are completely based on real life experience, and a really well-written song – make sense?  This would be an example of the latter – and I’m not even here to argue against ya if that’s what you love…you’ll get nothing but a high-five from me.  Deléo’s rockin’ with a poetic angle, and I’ve got respect for the craft entirely…but I maintain there’s more of a distance between the singer & the subject in this regard if you’re following along with me.  Some folks like a good story, some folks like a story they know is being told by those that have lived it firsthand – and maybe that’s STILL the case here on “Sinner Like Me” – I’m actually not saying it’s not…maybe both DiBenedetto and Deléo are livin’ like sinners and ready for the hellfire below for all I know – but if that’s the case, we’re still talkin’ about lyrics & phrases & whatnot that generally aren’t as relatable to the average everyday listener…I suppose that’s what I’m saying.  There are a lot of words in here that aren’t typically used in our everyday speech, conversation, and relationships…that’s all I’m getting at – so we tend to admire writing like this more for its poetic merit, as opposed to feeling the emotion as deeply as perhaps its intended.  In that respect, there’s still a massive amount of space for songs like this to exist not only on your playlist, but out there in the visual realm as well, complementing movies and television shows with that perfect soundtrack needed to bring everything together for one truly powerful moment – “Sinner Like Me” could completely be THAT song.  Ask Kate Bush how she’s feeling about being that kind of artist right now, and I’d imagine she’ll tell ya that there’s absolutely nothing wrong with that at all – because there isn’t…music has a valid place in our lives in about a million ways, shapes, and forms – I’m just doin’ my level best to explain & express where I see this cut like this finding its best pathway forward to success.

While there’s no disputing that Jeremy holds his own strongly in the way he plays this tune, I’m fully confident that he’d be the first to agree that the real all-star element fueling the fire of this particular song, is definitely Rhea’s vocals & outright amazing technique.  This lady can SING y’all…there ain’t gonna be any dissenting opinions when it comes to that aspect – I was extremely impressed with how she approached the melody of this song, and even more-so with the way she delivered on the promise of its most monumental moments/demands on her voice.  Whenever it seemed like she’d be up against it with the melody & structure of this song, she rose to the occasion with powerhouse notes and perfect tone, knocking it clean outta the park.  In order to DO that of course…you gotta be confident in the material, the players around ya, and your own capabilities – and I’d be willing to bet that Rhea knows she’s able to rely on all three of those aspects for sure, based on the way she performs “Sinner Like Me.”  She’s engaged and locked right into the moment – and if anything clinched convincing me about this single and what this duo can bring to the scene, there’s no doubt whatsoever that it was her phenomenal voice, professional control, and masterful display of expression that brought me around to really digging “Sinner Like Me” overall.  I might want that more personally revealing style of writing in the music I listen to – but who the heck am I?  I’m just some dude that’s got music spinning through his speakers non-stop…and if I’m being entirely real with ya, there’s a million or more of me out there in this world, every single day – but there’s only ONE Rhea Deléo…that much I can tell ya for a certain fact.  So if she wants to write about heaven & hell and angels & demons, garden gnomes or a freakin’ Happy Meal from McDonalds in the future to come – I’d trust her instincts much more than any words I could ever write here…that’s what I’m sayin’ – feel free to quote me on that.  All I’m advocating for here is a potential pathway to an even more bold connection between the music & the microphone, the words and the emotions behind them…they’re every bit as welcome to take what I got to say, or leave it, as anyone on these pages of ours are.  The bottom line is this duo has a ton of skill and all the right pieces to get themselves wherever they wanna go with their music and reach success however they choose to define it…sinners they might be, but winners they most certainly are.