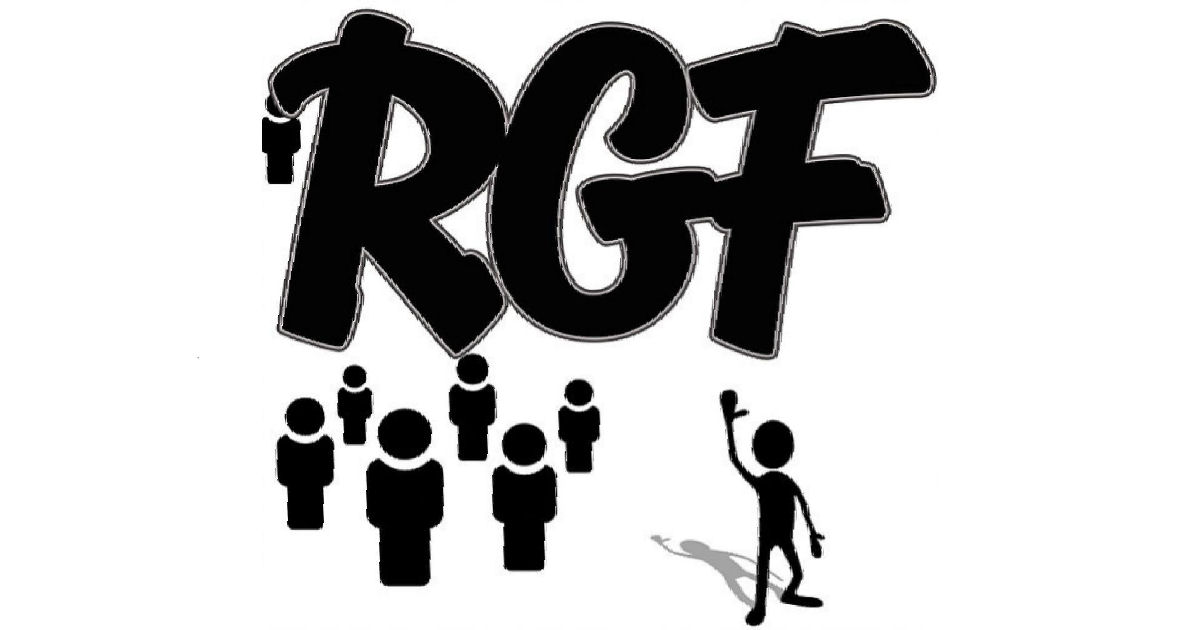 What I’m digging most about RGF is that after listening to their new single “Blue Angel” & previous cut “Spanish Orange,” it’s pretty clear that this is one hell of a wild & untamed band that’s certainly willing to try just about anything – as long as it rocks, of course.  This five-piece based in Omaha is capable of making so much noise when they wanna, which they definitely went for this time around.  Meaty alternative wrapped up in a psych-60’s style vibe, RGF gets right into “Blue Angel” and gives this mother everything they got.

Lots working in their favor here and a few things potentially working against them on their new single.  What is absolutely going to pull people in to listen, is the performance that’s being put on by RGF on “Blue Angel” as a band overall…they’re holding nothing back whatsoever, and as a result, it’s seriously easy to dig on what they’re coming up with on this cut.  The energy and mayhem are turned up immediately as Jzun creates a fun & frantic vibe through his vocals with just enough of a slight tremble, that you can hear this party could go off at any moment.  Not a band to disappoint your expectations, RGF basically explodes throughout the choruses of “Blue Angel” in an effort hot enough to melt your speakers.  You can hear the mischief, you can hear the skill, you can hear the sheer will to ROCK the fuck right out – and they use these assets to their advantage throughout this single structured for maximum entertainment.  Scott (Bass) and Noah (Drums) are impressively tight in the midst of such a thrashing rock song, keeping the rhythm section locked down, giving guitarists Barry & Adam the freedom to crunch it up & take the experience even further.  Not sure if it’s one of’em or both that get to claim the solo spots on “Blue Angel” – but props to that man, or men, for crushing that perfectly as well.  As to whether or not the people out there will notice anything other than the animal-like performance that Jzun puts into the mic might be another story…it’s…really damn hard to take your ears off what he’s singing & growling & screaming about.  Nor would you want to – he’s the amp turned up to 11 in human form.

All that good stuff being said…there are also some risks being taken here that may/may not pay off for them with listeners.  The chorus of “Blue Angel” throws back so far that it almost becomes a Kinks tune – which is likely part of their intentions or influence, but they run the similarities pretty close here.  Wilder in RGF form without a doubt…like I was saying earlier, it all comes down to performance on “Blue Angel” for me; even though there were moments I could hear those comparisons that could be made, it becomes pretty easy stuff to forgive or get into as a result of this band giving it their all at all times.  Where I think the bigger struggle they’ll face with this single is in the cuteness of the edit and the gimmick they don’t need.  Written & set-up to be delivered like a punchline, RGF makes just about the strangest choice you’ll hear this year with how they choose to ‘edit’ the potentially dirty words outta this track.  I admire the pursuit of trying something new like this…because there is a uniqueness to the approach that I haven’t heard…but it didn’t quite work for me personally…it made that moment jagged each time I listened.  What’s concerning is that it’s impossible not to notice it…and in my opinion, it really runs the risk of being what people will remember about this cut, which wouldn’t be cool at all because they’re kicking ass & crushing it throughout this hook-laden rock song.  The best way that I can think to put what RGF is attempting on “Blue Angel” in this part in words, would be to say that the results were kind of like the audio-equivalent to folding over a Mad Magazine cover to see the hidden picture – as in, no matter how you’d fold it, you’d still see that divide.  When they edit the punch & impact of that one spot, they’re attempting something ambitious, but it’s impossible not to hear it as a dividing point in the song in that same kind of way.  For many people out there, I can already tell ya for a near certainty, they’re going to hear it as a digital-skip in a song they really dig, which might be something that RGF will have to accept on this particular cut; essentially, it’s a clever idea, but it’s not one that the people will ‘hear’ correctly, feel me?  And again, that shouldn’t be the case here…it shouldn’t be the takeaway – it should be the balls-out performance that RGF puts into “Blue Angel” and nothing more.  Which is why I always advise staying away from those potential gimmicks or relying on a trick or two to make the impact…and I’d certainly share that caution with RGF here.  What they’ve created on “Blue Angel” and the way they play it would speak (or scream!) plenty loud enough on its own that a band like RGF doesn’t need any additional clever or sly ways to hook you in – they do that fine through the gripping & electrifying way they move & groove through this cut, or the storming moody authority they played “Spanish Orange” with.  Au naturale, as they say…the meat & potatoes of it all…untainted, raw, unfiltered, madness, energy, mayhem, and fun…these are the places where RGF lives & thrives.  Bottom line is that they’re clearly unafraid to take chances, risks, and make bold changes in their sound as well, which is all admirable…and while there’s always a chance that trying something new can come out uneven sometimes, there’s also the potential for breakthroughs we’ve yet to experience in music – and I’m still a firm believer that RGF is quite capable of many amazing things.  “Blue Angel” will be an interesting one to observe the feedback on from all the sources it comes from and likely a polarizing cut that’ll spark debate & discussion from many a musician out there…but as I always like to say around these parts, it’s much better to be talked about than be indifferent.

Find out more about RGF at their official website at:  https://www.rgfamerica.com/