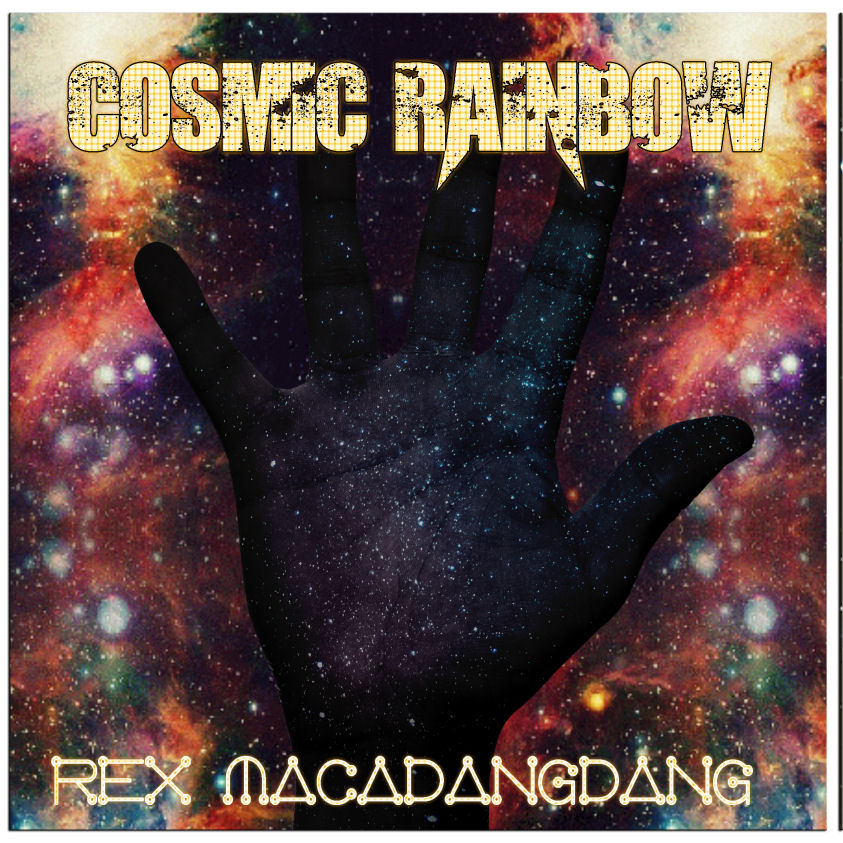 The first thing you might notice when you check out the music & social-media of Rex Macadangdang might be the fact that there are seven other players about to lend their talents and skills to support this singer/song-writer who has been in the incubator for over a decade. The sheer number of musicians alone is every bit the reason to assume there’s something special that’s been brewing in the new songs that make up Cosmic Rainbow, Rex’s new album. With a free-spirited sound that bases itself largely in indie-pop/rock, you can hear the ideas and innovation of Macadangdang have their own clever & signature style – and though some of them still sound like ideas in their early-stages, he’s done an excellent job of blending these talents together and put in a real effort to define his own unique style.

With the adventurous tones & sounds of the opening…it does indeed sound like we’re in for a ride. “The Stand” sets the pace quickly in its mellow-way; great, crisp-drums and melodic saxophone set up the beat as the acoustic guitar and vocals from Rex come in to accompany the rest. At first…he sounds a little on the shaky-side…it could be the tremblings of indie-style coming through…in any event, he finds his way quickly to a more confident sound which he’ll carry with him right into the following tune “In The End.” Great bass and keyboards bring out a fullness to this second tune to bring the music out a lot more, bring the energy up and let Rex put a little more power behind his voice to get those tones he’s looking for. The swirling harmonies that chime-in just past the third minute take this song to a huge, enveloping ending with all musicians really bringing it home.

Though Cosmic Rainbow doesn’t sound like it’s DIY through the production on any given song…the assembly of them all together might tell a different story. With the gigantic ending and stunning atmosphere of “In The End” finding every element on the boards and in the performance – the instant ten-decibels less of “Don’t Sleep On Your Dream,” only the third song in…is a little rough on us as listeners looking for that evenness. Aside from that, that knocked-down volume can really cost a great song; “Don’t Sleep On Your Dream” will mark both a moment that people look for on the album in terms of good pop-songs (it’s certainly a playful little ditty now ain’t it?)…but they’re also apt to remember that song is also where they need to turn the volume of the album sharply up.

“My Heart Moves For You” is packed with sweet sentiment and definitely possesses a ton of the endearing, emotional qualities that make indie-music famously memorable. Fantastic melody here on this song, lyrics are beautiful and it’s all performed with sweetness, passion & heart. Of the four I’ve heard to start out this first third of Cosmic Rainbow, there’d be a good chance this would be my favourite of them…

SUPPOSE for a second here…that Rex Macadangdang was about to bust into a sick techno-song or industrial pounder…and suppose he was a friend of mine and had just given me his brand new Cosmic Rainbow CD. Suppose that I just bought a kickass new car, put in a righteous stereo and for both “Don’t Sleep On Your Dream” and “My Heart Moves For You” let’s suppose I had to crank that stereo much louder to equal where things were at on the first two songs. After “Don’t Sleep On Your Dream” finished and “My Heart Moves For You” begins at the same volume – the shoulders relax…and I assume that maybe those first two songs only came through a little louder in my imagination.

And then you blow-out my speakers – ME, a good friend of yours so happy to support your music! Returning to a volume 30% louder than the previous two will shock the shit out of most people even if it’s NOT a techno or industrial song, like what we have here in “Riley.” In all honesty…this is one of the more beautiful songs on Cosmic Rainbow; “Riley” has a melancholy melody and a sweetness to its sadness that I quite enjoy – but to say that the unevenness in this mix is beginning to piss me off might be an understatement. Put it to you this way…without the mix solidifying the transition between these songs from track to track and keeping those levels even – it pretty much nearly NEGATES the idea of writing such melodic, chilled-out & easy to listen to rhythms. Straight-up Rex – if I have to worry about my volume knob every other song…it becomes extremely tough for me to sit back, relax and enjoy your music – but what really concerns me is that I have about 1000 degrees of patience for that more than most do. And it’s FIXABLE bro! Just make sure to have a listen through that list and find the ones that need to be brought up, bring’em up and switch’em outta there – it literally will make an audible world of difference for you AND for us out here listening.

And it’s WORTH it to take that extra time, spend the extra dough, whatever has to be done…cause there ARE songs here. I think the sound of Rex’s voice may be a hit with some and maybe not with others – but his ideas and melody-lines always seem to come through shining. He’s obviously a free-spirited fella – and I’d never want that to change; what he trades for perfect tone, he gives back to you in the form of a song & melody you can take with you anywhere. “Closer” is a great example of his indie-pop style…it’s a definite hit for sure…if not this version, someone else’s – the song itself is fantastic.

With a move into a slightly more bluesy/island-indie sound, “A Better Place” is an isolated and tiny gem nestled within this Cosmic Rainbow. Taking over where Bobby McFerrin left off in his lyrical-sentiment, this is a sweet, beautiful song with an absolutely brilliant melody written into its fibre. There is no doubt that Rex is not nailing this one all the way through…but there is also no denying that the moments where he hits this one in the chorus are NAILED with emotion, texture and tone. It’s absolutely gorgeous…I love it.

“I’ve Got A Secret” is like a mixture of 80’s music and razz-ma-tazz-jazz; up-tempo and energetic…it doesn’t quite work for me when coming right after the slowed-down beauty of “A Better Place,” though I can hear that it again offers a different dimension of Rex’s song-writing, style and scope on Cosmic Rainbow. The 80’s disappear and “God Give Me Strength” brightens up the playlist in all the right ways. Great strings, arrangement, great harmonies and another set of killer pop-indie hooks – I swear you could dissect almost every one of these tunes and find at the beat of its heart, a hit song. Rex is an expressive singer…whether you dig the tone or not is going to differ for everyone; but the passion, desire, heart & emotion are certainly there in-full.

Cosmic Rainbow goes on to reveal a little more gold at the end of this album as “Elizabeth” begins the decent towards the final moments. A completely sweet love-song with words that nail the energy & mood…great harmonies raise this song up to some of the best moments we’ve heard on the album so far. There’s a truly fantastic singer…female…she needs an album too Rex! Or a more prominent part…the combinations between the two sounds compliment each other perfectly and “Elizabeth” is impossible to be considered as anything other than a complete highlight & massive standout on Rex Macadangdang’s Cosmic Rainbow.

Ending with “Dreamgirl” has Rex entangled in one last love-song from afar, emotional lyrics and another performance with his heart attached firmly to his sleeve. The confidence is building…Rex will smooth out this sound the more he continues on…but again, the bottom line is that the songs themselves are completely there and ready-to-roll. A song-writer I’d definitely keep an eye & an ear on…there’s something unique and beautiful about the freedom in Rex’s music…there’s real heart in what he puts out there.