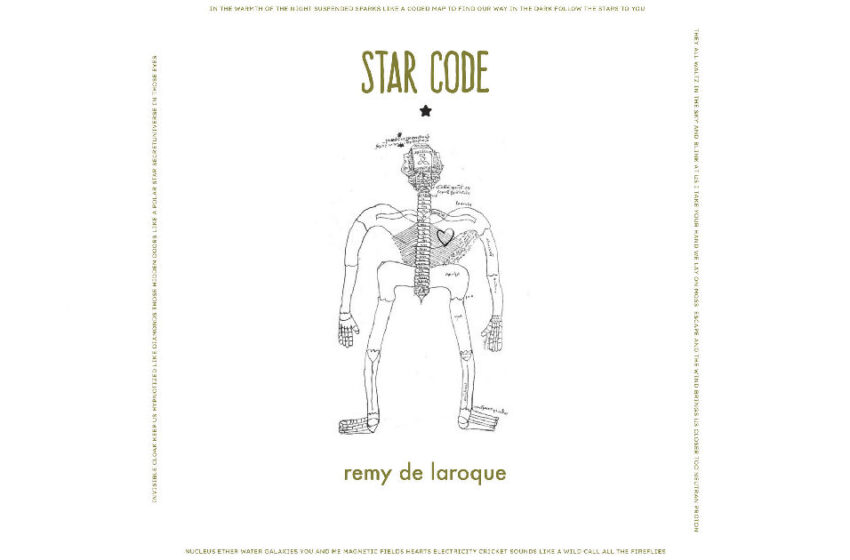 For the record, as strange as it might seem to write a song that’s all about bees, the ALL-CAPS method is always gonna weird me out much more than any topic or concept ever could.  Is that just a me thing?

Anyhow.  “BEE DREAMING” it is.  Everyone can read that, yes?  Y’all got your readers on?  Perfect.

I wanna let this slide…purely because I really do love what I’m hearing from artist Remy de Laroque on this single, and as I’ve said many times on these pages of ours, we all gotta write about something right?  The reality is definitely that the guy doesn’t need ALL-CAPS to have a song like this stand out amongst a sea of songs written throughout music’s history about chicks & cars…but right on, ALL-CAPS IT UP, REMY – I’ll take a tune that sounds like “BEE DREAMING” any way I can get it & I completely support ya, 100%.

SO LET’S PROVE THAT, SHALL WE?

IF THERE’S SOMETHING NOT TO LOVE ABOUT THIS NEW SINGLE FROM REMY’S LATEST RECORD CALLED STAR CODE, I’M NOT SURE THAT I HEARD IT…TO ME, THIS WAS A BRILLIANTLY WELL-PLAYED SINGLE FROM START TO FINISH AND A GENUINELY UNIQUE CONCEPT TO WRITE ABOUT THAT I’D HONESTLY NEVER ENCOUNTERED BEFORE.  REMY’S BEEN ROCKIN’ FOR QUITE SOME TIME NOW…LONGER THAN WE HAVE BEEN HERE AT SLEEPINGBAGSTUDIOS FROM WHAT I’VE READ & SEEN ONLINE…STAR CODE WILL BE HIS SIXTH OFFICIAL RECORD, WITH THE FIRST (1000 LIVES) TRACING ALL THE WAY BACK TO 1999 BEFORE THE TURN OF THE MILLENIUM!  A VETERAN OF THE SCENE Y’ALL…BELIEVE ME WHEN I TELL YA, THERE’S A REASON THAT EVERYTHING YOU’LL HEAR ON “BEE DREAMING” SOUNDS EVERY BIT AS PROFESSIONAL AS IT DOES…THIS MAN KNOWS HIS WAY AROUND THE OL’ STUDIO BOARDS FOR SURE.  HE’S GOT A GREAT VOICE…A HIGHLY EXPRESSIVE ONE THAT MAKES USE OF EVERY SYLLABLE, WORD, NOTE, AND TONE HE PUTS INTO THE MICROPHONE…AND TO BE TRUTHFUL, WITH THE WORDS BEING AS SPARE AS THEY ARE, IT’S ACTUALLY QUITE AN ACCOMPLISHMENT TO GET AS MUCH OUTTA THE VOCALS AS YOU’LL HEAR.  REMY’S NOTHING SHORT OF CAPTIVATING AND THAT’S THE FACTS, JACK.

WORD ON THE STREET IS THAT STAR CODE WILL GET ITS OFFICIAL ONLINE RELEASE ON JUNE 2ND, 2022, AND IT’S GONNA HAVE A FULL TWELVE SONGS ON IT.  FOUR OF’EM ARE AVAILABLE NOW AT BANDCAMP – WHICH FROM WHAT I CAN TELL, IS THE FIRST TIME REMY’S PUT HIS MUSIC UP THERE AS OPPOSED TO SPOTIFY, WHERE YOU’LL FIND THE REST OF HIS RECORDS & WHATNOT.  TECHNICALLY, STAR CODE IS GOING TO BE HIS RETURN TO THE SCENE AFTER NEARLY A DECADE…HE DID PUT OUT A SINGLE CALLED “LOVE CURRENCY” BACK IN 2019, BUT ALBUM-WISE, IT WAS BACK IN 2013 WHEN HE PUT OUT HIS LAST ALBUM CALLED Three Cows Past Midnight, WITH ITS MORE APPROPRIATE FONT SIZE.

All kidding, hard-times, and ALL-CAPS aside Remy…where you been hiding my friend?

Honestly…this guy’s got a genuine gift and should be doing this full-time.  I don’t know that he isn’t…maybe he is…but if that is the case, obviously I’d be wanting more outta the man than one record in the past decade.  Life has such a nasty tendency of getting in the way of some of the very best of us – and I’d assume that’s what we’re looking at here in the case of artist Remy de Laroque.  Listen to this single will ya?  Radiohead would have been proud to have written this song.  The clarity of the haunting guitar tones…the cleverness of the vocals, lyrics, and layering of the harmonies…the mesmerizing pace – the sheer enormity of the drums, yet how they’re played with such controlled, professional, and subtle restraint…no joke folks – captivating doesn’t even cover half of it…”BEE DREAMING” is the kind of track that should have you in awe of what one dude can achieve…it’s a flawless masterpiece, straight-up, full stop.  There’s not a thing I’d change and nothing I’d even tweak an inch further this way or that way – this is the kind of single where you’ll stop everything you’re doing just to give it your full attention, and rightly so.  It’s a perfect example of what it means to get everything out of every second you’ll experience, and Remy should be exceptionally proud of the results to be heard on “BEE DREAMING.”  It’s clear he’s got a major depth of knowledge in his instrumentation…I’d be willing to bet he’s classically trained, and has learned how to cunningly adapt his skillset into a gripping spin on Alternative Art-Rock…this whole song has that seriousness that hangs in the air of the atmosphere like songs like “Dust In The Wind” & “Street Spirit” – you’d practically feel like you were missing some crucially important detail if you didn’t stop to listen to “BEE DREAMING” with every ounce of attention your span may have.

But that’s what great music SHOULD make ya do, isn’t it?  ALL-CAPS ain’t gonna make one lick of difference if you don’t have any substance to back it all up…and that’s where de Laroque comes in with his veteran experience to say HOLD MY BEER with the way he plays & sings a song like “BEE DREAMING” – you’re listening as intently as you are, because he’s making a pure style of music that requires zero gimmicks, marketing, or anything more than your undivided attention…which his performance EARNS.  It’s fascinating…that’s the best way I can put it…hypnotic, mesmerizing, captivating…enchanting in its own strange & oddly beautiful way…it’s a darkened kind of beauty, sure…but still beautiful all the same.

Giving this one a BIG THUMBS UP OF ALL-CAPS APPROVAL HERE Remy de Laroque…you’re Laroque’n my world with a song played this well from the concept on through to the execution my friend.  Keep on puttin’ that talent of yours to work Remy…there’s not a person in the world that would listen to “BEE DREAMING” and not come to the conclusion that making music is what you were born & destined to do.