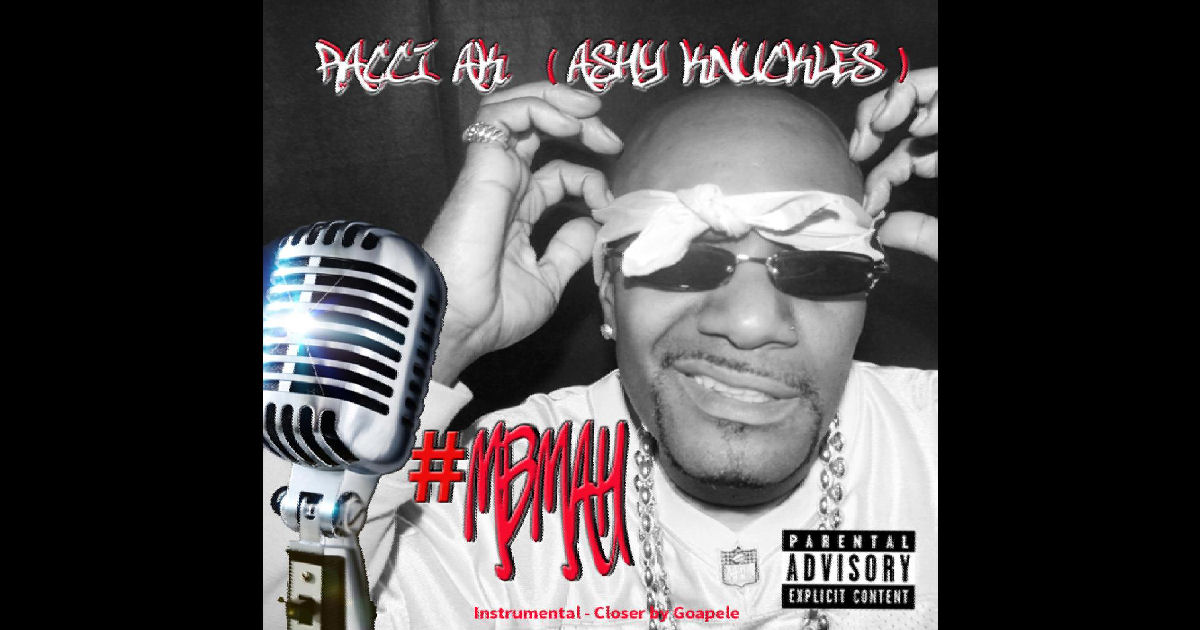 Probably best that I pass on the caution that was passed onto me – there’s some language in Racci AK’s new cut “MBMAH” that…umm…it uh…well…let’s just say it might not be suitable for every set of ears out there…some of that adults-only kind of content, feel me?

It’s funny though…not the song – just the expectation of knowing something is going to potentially shock the system a lil’ bit coming up at some point in the experience.  It’s like you know it’s coming on “MBMAH” when you get that knowledge upfront – but you still have no idea HOW until it happens.

What I ended up really digging about this new jam from Racci AK was the fact that, by the time you realize what you’ve gotten yourself into here, you’re already in the thick of the story – this emcee keeps it on the level pretty much throughout the first verse, smart enough to not reveal all his cards at once.

But by the time you hit that first chorus, Racci AK has pushed all-in and there ain’t no goin’ back.

Loved the jazzy intro in the music heading into “MBMAH” and I felt like the flow from Racci AK, aka Ashy Knuckles, came out really strong right off the drop, layered in the mix to add beef to the sound and emphasize the lyrics.  And at first, Racci AK comes out spitting lines that suggest a rebuilding of sorts…at the beginning of “MBMAH,” you might even for a second or two, almost assume he’s got an anthem of positivity in the works…but as the song moves on, you start really digging deep into what’s really on his mind.  As you hit the halfway point of that first verse, you’ll begin to notice a twist in the direction.

The best writers in the world will all tell you the same thing when it comes to their advice – ‘write what you KNOW.’  I’ve always taken that to heart and generally assume that most artists do the same either by conscious choice or by default.  In the case of “MBMAH” – the tone of Racci AK’s delivery sounds plenty damn real to me and the imagery, scenarios and messages in his words come out so strong that I think it’d almost be foolish to assume that this song is based on anything other than his own personal experience.  I’m all about putting yourself right into the moment and into the music in a committed & focused way that brings the most YOU into YOUR music – and there’s no doubt that he’s done that here.

The narrative that runs through “MBMAH” ends up feeling incredibly real…the kind of lyricism & delivery combo that, in my opinion, can’t be faked or fictionalized.  This single actually comes out sounding so extremely personal, that for the second time this year, I feel like I’m hearing a song that’s actually specifically designed for one person to hear, which would be the baby-mama in this scenario.  Even though Racci AK is ‘Alpha-male til (he) d.i.es’ and presents each line with bold, confident tones & pro-delivery – there’s not a single doubt in my mind after hearing “MBMAH,” he’s also digging deep into some severely fresh and savage wounds here.  At the heart of this single, is the tale of a broken family and a father’s determination to keep the connection to his kids, no matter what the odds are.

Of course, Racci AK phrases it all much differently than I am now…but ultimately, that’s really what this cut is all about…and as a result of his honesty & authenticity, as harsh as it all can be sometimes, there’s zero doubt about how real this song really is.  Did he go too far with it?  Some people will likely say yes to that – others will listen to the scenarios described in detail so well by Racci AK and the tone of his words and completely be able to understand his side of the story.  Much of “MBMAH” sounds and feels like it’s Racci AK’s effort to make sure that side of the story is actually heard and not just one-sided.  The way he raps, you can tell he believes in the words he’s written and spits them into the m-i-c with resounding power, commitment and confidence you can completely hear, which makes a huge difference when it comes to just how personal the lyrics really are and how real the entire experience of listening becomes for us as a result – it’s that strength in his connection to the words that becomes key.

So.  Even though I fully believe that these are words that are intended for that baby-mama out there – what makes “MBMAH” work on a universally accessible level is that Racci AK has a real smoothness in the music gliding along with him the entire way, which actually sounds incredibly relaxing & chill considering how amped-up the emotions are in the lyricism.  The hooks of the chorus are bound to hook almost any set of ears out there; while all the details in the storyline of “MBMAH” will certainly catch your attention – it’s likely those strong hooks of the chorus that’ll keep you singing along and be the memorable highlight from those first couple listens before you start to memorize & really hear the words.  Then you’ll notice the heartbreaking narrative that runs through “MBMAH” – but you’ll also likely be impressed by the resilience of Racci AK and how he’s clearly put himself right out there into the open with the expression and emotion on his new single, and how he’ll never give up on his kids.

All-in-all, I thought this was a seriously interesting cut to really dive right into.  I mean, I suppose that’s obvious by now because of all these word-things I’ve written out…but for real, Racci AK has created a cut that flows so smoothly that it gives you the opportunity to really hear what he’s saying in between the lines.

No matter what, that groove of the hooks in the chorus will get ya – and beyond that, I’ve always got love for lyrics that manage to work in a slick reference to Homie The Clown from In Living Color – who doesn’t?  That’s probably the most lighthearted moment of this cut, so be ready to ride on into the personal with Racci AK like you’re sitting on his couch with a front row view.  Everyone takes a risk in their art by making it personal – but it’s those risks that lead to seriously rewarding experiences like this one…cuts that you can peel back the layers of and get different elements out of it each time you listen.

Find out more about Racci AK’s music from the official links below!