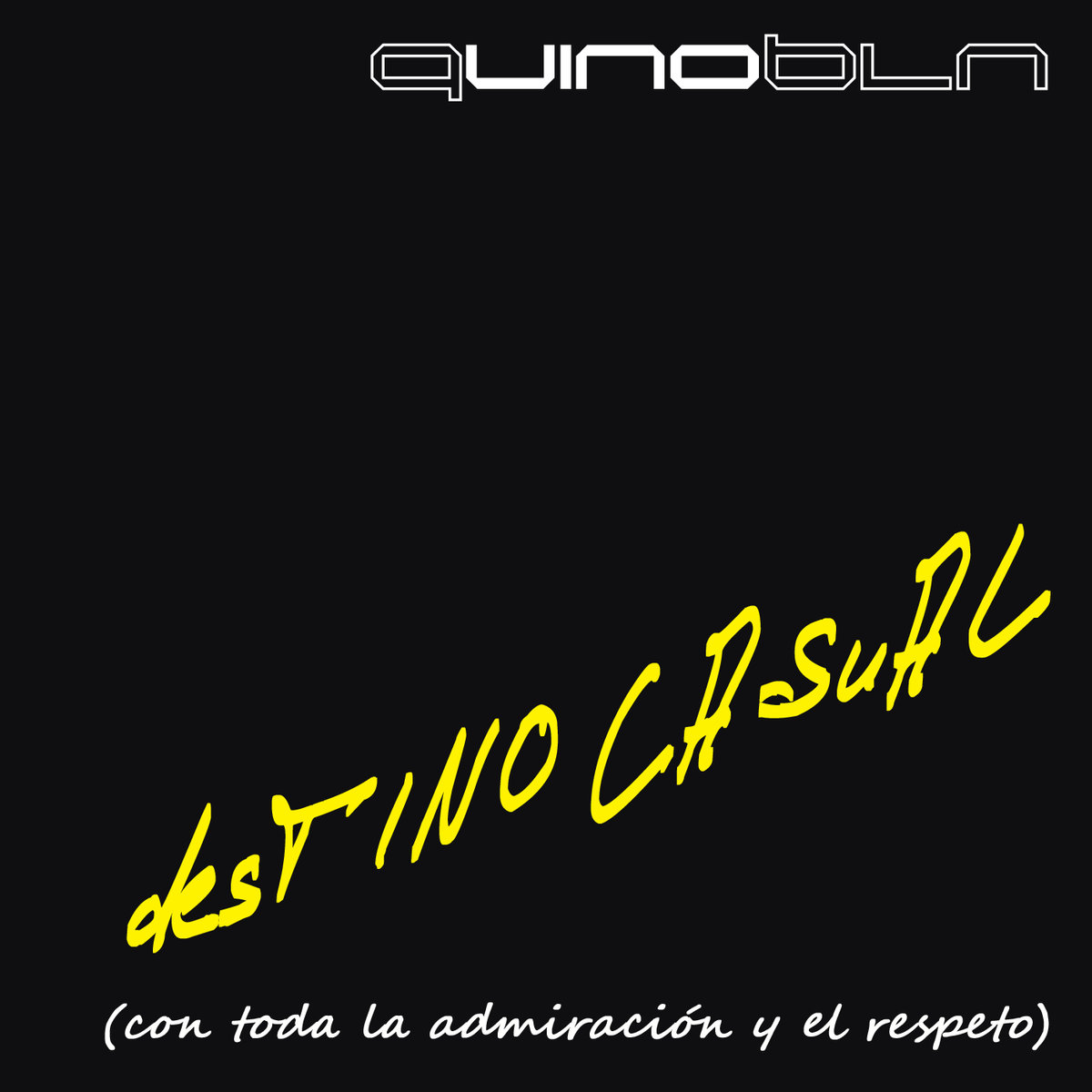 Have I finally encountered too much flavor in a single song?  QuinoBLN’s new track “desTINO CASuAL (con toda la admiración y el respeto)” is an oddity for sure…it is WILD and more than likely, unlike anything you’ve previously heard or experienced.  As with all things brand-new…the end result is often a polarizing one; not going to lie to you, it took some getting used to and a few repetitions to get my head wrapped around this one!

I mean…to be fair to myself here…QuinoBLN has pretty much added everything but the kitchen sink into the mix & madness of this surprisingly aggressive/bright sound.  Usually something with lighter tones in the actual sounds being used comes out sounding a lot softer…and I think that the straight-up boldness of “desTINO CASuAL (con toda la admiración y el respeto)” is something you can’t help but notice immediately.  The synth-lines immediately attack you, furious beats and piano-keys are wildly threaded through the opening in a huge jumble of sound before it breaks into a clever, smooth assembly full of strings and distant drum sounds.

I like the sound of the vocals…I like the vocal-flow itself…heck, I even like the genuine madness in this song because for the most part, it’s completely controlled despite sounding chaotically all-over the map.  A close-in listen will tell you, there’s not a thing out of place here timing-wise…and that in itself is an accomplishment; while things might sound more chill for the occasional moment in this tune, I assure you – everything about the music is still flying at you at incredible speeds.

The only issue I potentially have with “desTINO CASuAL (con toda la admiración y el respeto)” is that main synth-line hook in the chorus…because it’s an all-or-nothing, love it or hate it, make or break part of the song with the way it’s mixed-in brightly over top.  At times for me it worked perfectly…at others I wasn’t sure it wasn’t a little bit cheesy…other times it just felt extraordinarily aggressive even compared with the rest of the elements that furiously combine to make this song come bursting to life.  Were it not for it being the brightest element in the mix and closest to our ears & what we hear…the rest of the music might have made more impact; but even that being said, the hook itself is undeniably powerful and without it, I’m not sure if this song would make more or less sense to the people out there!

“desTINO CASuAL (con toda la admiración y el respeto)” is perplexing in its idea and execution…but by the same token, it’s quite the wild ride & adventure as far as what you can experience in music goes.  I had NO IDEA what I was in for…so believe me when I say the first time I listened to this track I felt like I just got run over by an entire stampeding mardi-gras party gone beserk!  It takes some getting used to…but I do appreciate just how unique it truly is from pretty much anything else I’ve heard this year.  Whether that ends up being a good thing or a bad thing for you personally…well…that’s going to be highly individual and different for each set of listening ears I believe…but I also always buy into the fact that a song that gets people talking will always lead to a dedicated fan-base of people that genuinely support the sound.

The song defies typical convention in favor of new, unexplored combinations in sound…and I always salute an effort like that.  “desTINO CASuAL (con toda la admiración y el respeto)” is packed with untamed enthusiasm and wild sounds that cannot possibly be ignored.  I dig the unique – and there is a ton of unique ideas all mashing, smashing & crashing together impressively on this new tune from QuinoBLN.