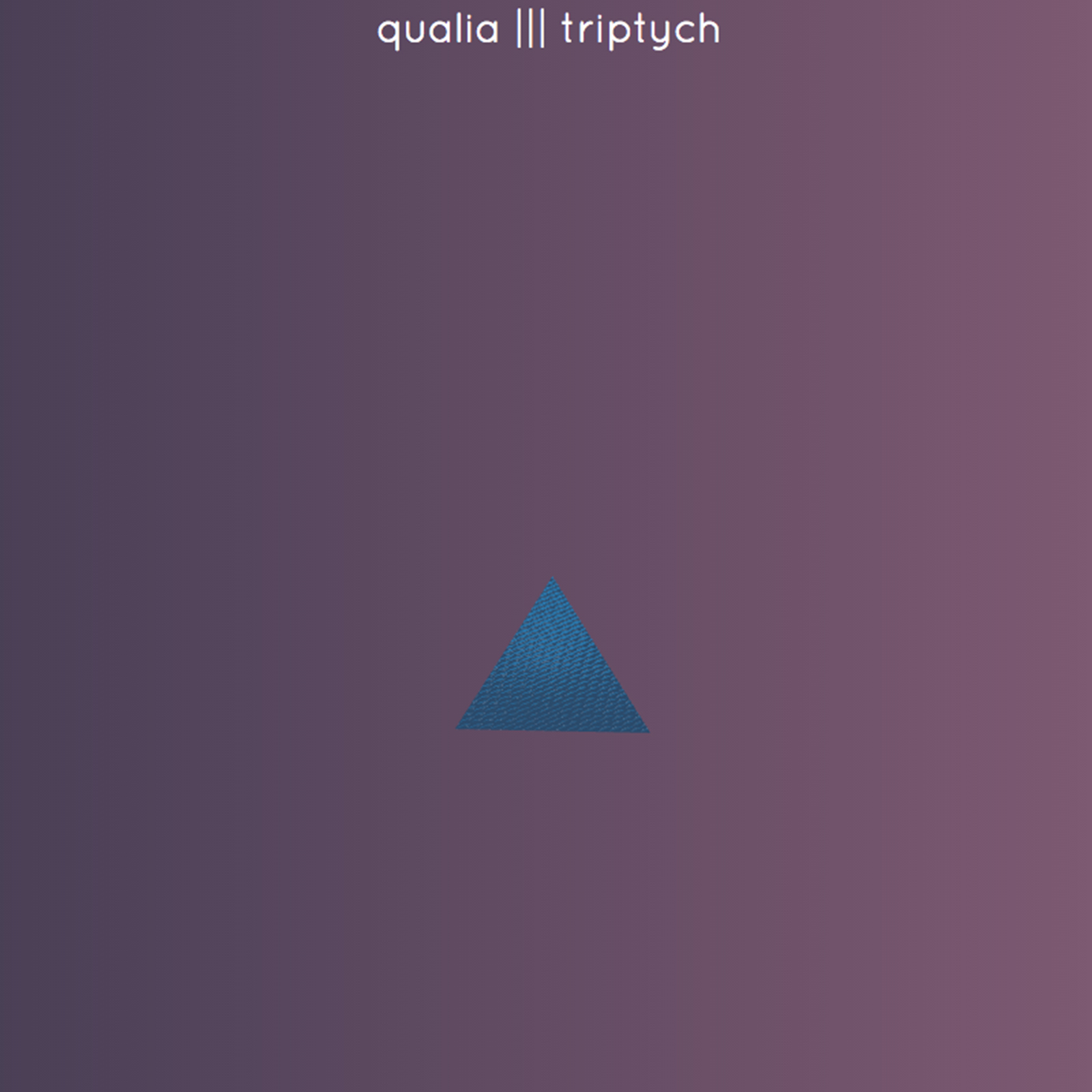 Whatever it is…whatever luck I’m experiencing lately in not only finding quality music within the independent scene, but also music that’s being made incredibly CLOSE to where our studio is based…I really don’t want it to stop! Recently finding excellence close by in acts like upcoming SBS Live This Week guests Lindstrom And The Limit from Seattle, and Violet Light from the Little Prairie, BC – today that string of luck continues with Qualia. From what I can see…Qualia is the realized vision of just one dude – Michael Hazani…there’s not a ton of info out there yet to confirm that 100% but I can tell you with certainty that the current design of his main site is completely trippy…and awesome.

Anyhow…Michael…Seattle’s really not far away…Lindstrom And The Limit managed to make it here for a live performance & interview…just sayin! I’d love to meet this musical-melody-mastermind one day – Michael is pretty much making the music I love to sing along to loud & proud. With massive emotions building and breaking throughout Qualia’s Triptych EP, the songs remind me of bands like Two Door Cinema Club, Fences, The Boxer Rebellion, Birds Of Tokyo, Feeder…all bands that mastered the ability to communicate sincerely through insatiable, sticky pop-hooks. Qualia has done the same and made a huge impact on my ears with the stunning sounds and song-writing I’ve found on the Triptych EP.

“Presque Vu” is the ultimate opening song. My first immediate thought on this one…was that I know of a friend that would love this every bit as much as I did…and every single inch of me plans on playing this song and telling him it’s been plucked straight up from the mainstream. Who wouldn’t believe it? Listen to “Presque Vu” for yourself and tell me I’m wrong – tell me that’s not one of the most enormous hooks you’ve heard emerge from the independent scene this year – I dare you!

Because I’m telling you right now that if this particular song came with a label that read Coldplay, Postal Service, maybe even Owl City in front of the “Presque Vu” – it would sell by the MILLIONS. Now…that’s not a knock against Qualia…I have every bit of confidence in Michael and that he’ll eventually be remembered just like those gigantic names I’ve compared him to – but how crazy is it that just because he’s still starting out and making a name for himself that a song written as powerfully as worldwide superstars and it can somehow remain a secret. Get this guy a better publicist than me – this is a song that needs a media-storm of attention; it’s absolute audio-gold.

Honestly…this guy is a freakin’ genius if he’s solely responsible for everything I’m hearing in the performance and production of Triptych. “Guillotine” is an instant confirmation of Qualia’s excellence and somehow pulls off an incredible follow-up to one of the biggest & brightest songs I’ve heard this year through “Presque Vu.” There would be half of any given week that I’d possibly prefer to listen to the massive ideas in “Guillotine” over the EP’s opening tune…completely different moods on both, they’re both spectacular and thankfully I can listen to them whenever I’d like without have to choose. There’s so much I love about the layout and build of this second tune…so subtle at the beginning with just the slightest hint of a beat until the world just stops at around one-minute-forty-five-ish and this song finds a massive sound and second-gear. A dead-ringer for an early Chris Martin on this track, Michael flows flawlessly between his falsetto and comfort-zone and adds every bit of the emotional punch the lyrics and mood demand. Backing himself up with incredible layers of vocals echoing into each other – I’d bet money that when the 3:32 mark hits, Michael hears it every single time. I bet at times he’s wondered if he nailed it there…or if people ‘get it.’

Honestly, it’s rare a reviewer singles out a single-second…but at 3:32, Michael has put in a punishing, gut-wrenching twist into his voice that carries ALL the weight of the words and drives it into you like a trainload of emotional-freight. I think this moment deserves a complete shout-out of extra-attention to it. If the way he sings this song doesn’t affect you in some way, shape or form…you’re freakin made of stone. Another big win for Qualia on “Guillotine” – it’s beautiful, sad and completely perfect.

Part of me is inclined to suggest that the EP might have worked a little more effectively in the opposite order. I’m hardly complaining – all three are excellent songs…but I think if laid out in the reverse order, it would have had a slight build and perhaps more epic ending. Again…I’m not complaining – I dig “Tell Me A Story” for a ton of reasons and it holds its own against the two massive songs preceding. With dreamy sounds in the atmosphere of this final tune…the breakdown just past two-minutes in is a really beautiful moment; hardly any music at all…just Michael’s incredible voice carrying the melody as the acoustic guitar and backing vocals slowly begin to creep back in. Qualia has a real enchanting magic in the music that evokes a ton of emotion in both its creator and in us, as listeners; the Triptych EP is a memorable experience I’d love to repeat anytime – these songs are sparkling and truly fantastic.

Now go trip yourself out at the official Qualia homepage…I’m telling you it’s worth it!