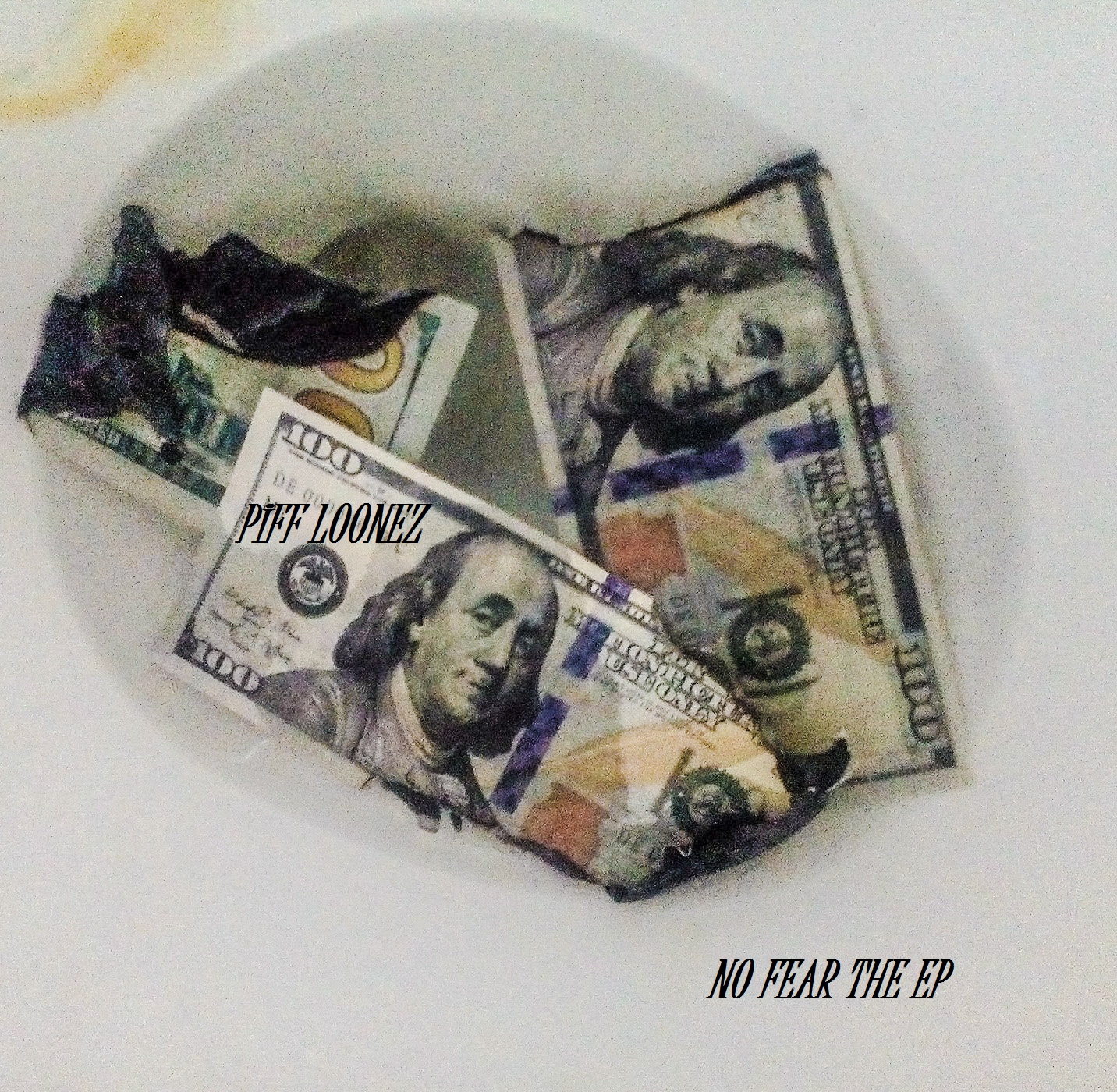 I can definitely get into this.  I woke up today looking for information…maybe a sign of some sort…I don’t really know to tell you the truth; maybe truth is what I was looking to really know.  I can’t say that I was expecting to finding it here on the No Fear EP from Piff Loonez, but yet, here it was at many points throughout the new record as it played at the top of my playlist this morning.

It began with “Medication” – the kind of thought-provoking, pensive and lyrically-clever kind of song I really needed to hear.  The narrative of the storyline is a deep one…much of it deals with “Medication” – whichever pill, plant or source you consider that to be defined by, and the ability to lean on these things in life without tipping over into oblivion.  Whether it’s depression or just life that gets you down, “Medication” is often what we turn to in our world today for the answer.  I know I’m guilty of that personally…and that this track speaks to me on that level.

We all do what we need to do to get by.  I’ve always struggled with the pacing of life in general…without any kind of “Medication” fueling my day, it often moves at a slower-than-slow speed that makes me feel like life itself is often moving backwards.  There are many points made swiftly and quickly in this heavy atmosphere created by Piff Loonez on this opening-cut; I might like a lot of what I hear on the No Fear EP…but truthfully I don’t know if I found a connection to a track more than I did with this first sample of what he’s got to offer us all on his new record.  Ain’t nothing wrong with that…it’s a five-song EP and we all try to come off the block gunning for the finish-line; it’s a fairly acceptable thing that the track you identify with most might come at you extremely early on a short record.  The production put into “Medication” and the music sounds fantastic – it’s thick and really sets the bar high for Piff Loonez as it starts-up his new EP…it sounds like rain, or an old-record on-the-spin as it plays…a subtle effect added but one that really creates the right-level of tension and slow-burning intensity in the music.  Loonez sounds like he’s got all the values of Fight Club running into the ones you’d find in Requiem For A Dream on “Medication” – its full of insight, observation and valid emotions regarding the weight he’s got on his shoulders…the same weight that many of us carry and can certainly relate to.

The low-down, dank & dirty beat that stokes the fire of “2 Turnt” takes the record a little more towards the typical club-beat & lyrical subjects you’ll find in the rap-game of our modern day.  Complete with auto-tuner assists, background vocal-support shout-outs and your themes of bitches, money and drugs…”2 Turnt” comes out sounding like it’s menacing & mean.  Catchy for sure…the beat is definitely one that will capture your attention quickly once it hits about thirty-seconds in…whether you relate to the lyrics will be more on you and whether or not that’s an important thing in comparison to just enjoying the ride of the low-end-infused beat.  Piff Loonez demonstrates solid skills for the second-cut in a row as he takes his complex lyricism for another set of twists and turns on “2 Turnt.”  Clearly a guy that’s got some great ideas when it comes to his songwriting matching the atmosphere of the music he’s working with…and I’m no stranger to the fact that regardless of whether or not the lyrics ever penetrate your dome or not, that a beat with dark-grooves like this is often one that will catch fire and turn into a massive-blaze quickly with the people out there.

For me though…it’s much more about tracks like “Medication” and what  Piff Loonez is creating on “Went Wrong.”  It’s not saying that it features David Cleare – but that’s what I’m assuming as the name is listed right beside it on the song.  I mean…it could be that the full title of the song is “Went Wrong – David Cleare” – but I don’t think that’s what’s meant here.  Up in a high falsetto-sound, there’s a distinct R&B/Soul sound in the vocals that accompanies the piano-driven music…and given that it sounds completely different from the sound of Piff Loonez voice or what we’ve heard so far – I’d say it’s pretty safe to assume that voice belongs to a featured guest and in this case, David Cleare.  Whatever the case really is…that’s a sound that seems to complement what Loonez is doing well.  Complete once again with the subtle layers of atmosphere woven into the fabric of the music – a lot of the No Fear EP sounds like it’s spinning freshly right off of a turntable – I can appreciate that for sure.  Sometimes when this is attempted by others, it tends to get the mix a little muddy…but I’m liking the way it seems to serve the new Loonez record.  Cleare sounds pretty undeniably gorgeous while Loonez keeps it all real through the rapped-out verse and sounds even more confident, clear and on-point when he brightens-up the chorus in what is clearly a thoughtful & melancholy song through its lyrical content and examining of relationships.

“Scale” was a tougher one for me.  I dig the low-end beat…and on the technical-front, there’s not too much you could complain about – I know I wouldn’t.  When it comes to the performance from Loonez…I think there’s a little something missing still…like an extra gear he needed to shift into to get the conviction in his words to stand out like they should be.  I think he’s damn near flawless in the verse of “Scale” – but this track definitely has that anti-chorus feel to it where you’re expecting the track to rise-up to the next-level, but instead it tends to shrink-back in sound and not quite give you as much as you were just getting through the verse.  Some people dig that…the anti-chorus is something you can hear has been on the rise in the independent scene in the past couple years.  I know I’ve commented on it many times over the past while…what I’m still not sure of is whether it’s actually an idea that people are identifying with, or more of an indication that someone ran out of gas during the writing process.  Not just Loonez here on “Scale” – but anyone out there that’s tried this route.  Are people coming up to you on the street and saying things like, “Man, I LOVED the way you sucked the energy out of the chorus of that song and nearly flatlined the entire beat!” – you know what I mean?  Does that EVER happen?  I think it’s a consideration that needs to be made…I’d also be the last person to say that every song needs to have a similar approach or style, but I’ve gotta admit it’s rare, if ever at all, that I’ve found this kind of idea to not end up feeling like the verse is what you look forward to and the chorus gets left behind.  It’s just a matter of perception for many of us…like the dynamics of the writing are played out in reverse from what you’ll expect to pull you in.

In complete contrast…the final track “Litt” shows the impact of exactly what I’m talking about.  There’s a great build to this track from the beginning to the end, with each progression along the way building up the intensity and increasing the vibe of this cut.  “Litt” keeps the groove hitting hard…it’s cut-up & smartly edited and the music has huge sonic-depth to it as Loonez works a seriously slow-rollin’ flow over the top.  Definitely one of the tracks I felt stood out easily by comparison along the way and absolutely one of my favorite performances from Piff throughout the entire No Fear EP to end it all off with gigantic impact as the low-end bounces this track into your dome and the words & hook dive right into your memory-bank.  A solid effort throughout for sure…one that hints at the possibilities of more still to come from Piff Loonez; seems like this emcee is just starting into his grind by the time the record is over…but that’s a hell of a reason to repeat it and anxiously await the next dose!

From what I can see…you won’t be waiting long.  He’s already putting out new material even though this new EP was just released at the beginning of April!  Check out what Piff Loonez is up to and find out more from his Facebook page at:  https://www.facebook.com/Piff-Loonez-140565009323411