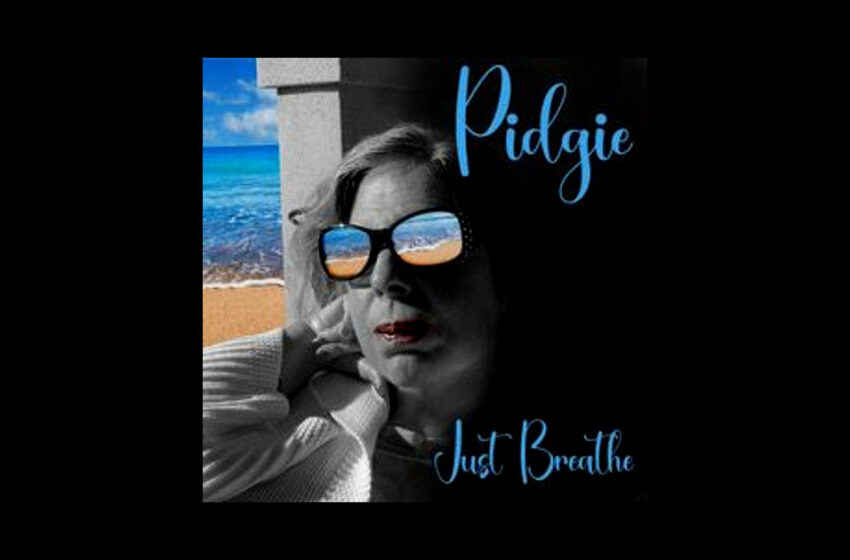 It is a little strange to sing about it while you’re doin’ it, and you are, ain’t it?

Pidgie’s a unique character out there in this scene we share for sure.  Sometimes you stumble across people with a true desire to make music, and I’d suspect that Patti Panzarino, aka Pidgie, is certainly one of’em.  For better or worse, whether you hear her doin’ it out loud on a record or not, I think it’s safe to assume that she is probably singing her way through each and every day, from the moment she gets up to the time she goes to bed…call me crazy if you wanna, that’s just the impression I’m getting here.  And that’s a favorable thing, wouldn’t you say?  Chances are there’s more than a few of you that can relate.

She’s got a genuinely interesting story that deals with much of her struggles over time as a differently abled American…and as a dude that’s got a differently abled sibling like Patti did herself as well, sure, I’ve got a lot of empathy for the tale of her travels to becoming the artist that she now is today.  That being said…it’s not really something I dwell too much on…in my opinion, it’s part of the story, but far from all of it…and I’d never be able to accurately describe all that philosophy here into the space of a single review.  Differently abled though?  As much as I’m sure many would rush to use that as her selling feature, the reality is that (*takes deep breath for big long list of accomplishments coming…), Panzarino has got a Bachelor of Arts degree, she’s got two first place finishes in wheelchair karate, she’s been the president of the organization for students with disabilities, in addition to becoming a founding member of CDM (Coalition for Disabled Musicians) where she still serves proudly as their vice president, she’s had her own co-hosting role on cable TV, her own Christian radio show, she’s was the official winner of Ms. Wheelchair Massachusetts a decade ago, and she’s received a Lifetime Achievement Award at the National Ms. Wheelchair America Leadership and Advocacy Competition, among MANY other highlights in her journey along the way.  Differently abled you say?  According to whom?  Her work ethic is clearly unrivaled, her determination is unparalleled, her motivation is unmatchable – and to put it quite simply, she’s put just about every person on this planet at a complete standstill compared to all she’s achieved.

Like…for real…the list of her accomplishments could go on & on…to the point where, it’s clear that she’s decided she may as well tackle the other stuff on her to-do list that didn’t make the initial top 100 now – so I guess she’s just gonna take over the music industry after having done just about everything else that a person ever could with their life, differently abled or otherwise.  Impressive to say the least – you’re a genuine inspiration to millions Patti, and there’s no doubt about that after everything you’ve done with every moment you’ve had.  The question becomes, does she have the chops to compete in a bid to reach the top of your playlist in what sounds like her 200th career choice at this point in time?  Honestly?  Honestly I don’t hear any reason why she couldn’t any more than I’ve read one – Pidgie’s capable of doing anything she sets her mind to, so if making music is the thing she wants to do now, she’ll do it & she’ll do it at an extremely high level.  For example…the list of all-stars she’s got playing alongside her as she sings “I Wish I Knew How It Would Feel To Be Free” would take another two pages to write out if I listed all their credentials & their resumes…they’re essentially all legends from the studio to the stage!  Like I was tellin’ ya…when Pidgie decides to do something, she makes a commitment to giving it her all – I don’t know if it’s a method of self-imposed pressure to include all these aces in her music career, but it definitely gives her another challenge to take on, conquer, and triumph over – which I’d argue she does.

With a Macy Gray-like voice & a Gospel-infused type of sound, you can feel the uplifting spirit that’s at the heart of a song like “I Wish I Knew How It Would Feel To Be Free” and the positive sentiment that it truly has in its core message.  Musically…again…if you were looking at the list of incredible musicians she’s enlisted, or listening to this song yourself, there’s no question these players can hold their own – it was all a matter of whether or not Pidgie had bitten off more than she could chew in terms of keeping up with their accomplished skillsets in the art & craft of making music.  She should be seriously proud of what she’s done with this single, which comes from her new album called Just Breathe released this year – she’s got style, she’s got tone, she’s got uniqueness that stands out…and somehow, even with all the incredible talent surrounding her, she’s still managed to end up remaining the star of the show!  Again I ask ya – differently abled?  If by differently you mean “amazing,” then sure, I think I finally get it all now.

While it’s going to be fair to say that a cut like “I Wish I Knew How It Would Feel To Be Free” isn’t necessarily a sound or style that’s found as much in the mainstream today as it once was in the past – I’m also not disputing its continued relevance in the heartland of the good ol’ USA to this very day either.  It might not be a single that’s bound for mainstream radio, or even made with that intention – like I told ya from the very beginning here, Pidgie was going to be singing, each and every day of her life, whether someone ended up recording her or not – we’re just lucky enough that someone actually did.  Because now we get to feel that joy she finds in making music and experience it through her perspective – all of this adds up, and all of this counts for something special – she’s put in a spirited performance on “I Wish I Knew How It Would Feel To Be Free” that tons of people will have no problem turning right up & singing along to themselves.  I’d be the last person to tell ya it ain’t catchy – it IS – it might not be what you tend to find out there these days, but there’s something authentically comforting about her sound that is going to carry her music far across the internet, straight into the hearts & homes of many.

From the cleverly contrasting emotions found in the lyricism that’ll have you considering her words, to the uplifting performance you’ll find in the final results of how this whole song sounds – Pidgie’s found herself yet another career that she can competently compete in, if not wheel full circles around the rest.  An inspiring artist with a whole lot of heart, I’m confident Pidgie will make an impact with her music, like she’s done with so many other things in her life already – I look forward to seeing & hearing her success.

Find out more about Pidgie at her official website here:  http://pidgiesmusic.com

Tags: I Wish I Knew How It Would Feel To Be Free Pidgie Singles sleepingbagstudios