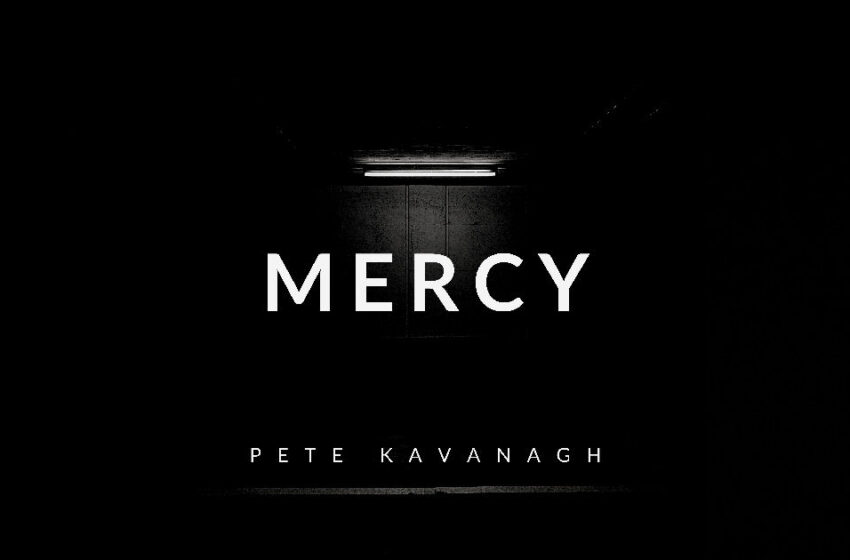 On the most recent episode of the SBS Podcast, we gave this killer cut from Ireland-based solo-artist Pete Kavanagh a spin and told ya a little bit about what you can expect to see in the stellar black & white video he’s got supporting it – and as promised, I’m here to tell ya what more I can about this new single.

Listen.  “Mercy” is just a straight-up fantastic track – that’s the reality, that’s the facts.  It’s dank & it’s twisted, eerie & haunting…but it’s also got all the inherent catchiness of a Tom Petty-meets-The Beatles, with the heaviness in the musicianship you’d find in the subtleties of Led Zeppelin – in particular, via the confident stomp and beats provided by featured guest Graham Hopkins’ spellbinding technique, precision, and passion.  There is not a doubt in my mind that “Mercy” is NOT gonna be the happiest song you’re gonna hear in 2021 – so be prepared for that – what Kavanagh has created with this gripping new song is much more involved & important than mere entertainment.  Don’t get me wrong – you will be entertained…oh yes, you WILL…but overall, this cut is on a different mission…it serves a different purpose that’s well beyond the typical tunes you tend to find out there in the ol’ music-scene, driven to create awareness & shed some light on some very dark issues.

Perhaps, no better summed up than in Kavanagh’s most powerful line – “God forgets a lot of things.”

You’ll just have to pardon my language, but I get fucking chills every time he sings that line, straight up.  That’s the real truth of “Mercy” though, in a nutshell, right there as plain as day – Pete’s playing offense here on this song, and just like I told ya on the SBS Podcast, rightly so.  This single was created “in support of the victims & survivors of clerical and state abuse in Ireland, and indeed worldwide” – of which we know, for a fact, by the numbers, continually revealed year after devastating year, are far too many.  Pete’s written a brilliantly powerful song that speaks up strongly on their behalf without being exploitative whatsoever – he’s right there on the frontlines and approaching this war on abuse with real sincerity and slow-burning angst that sounds completely like this situation has pushed this man right to the very edge.  At the very least, he’s been pushed to the point where writing about the brutal abuses of the church and state that have gone unpunished since time began, became not just a priority here, but clearly a necessity – the authenticity in this song resonates in every pore of your speakers, and within every fiber of your soul.  Pete’s punching massive holes into a void in society that has been silent for far too long…an entire section of our communities that has proven to have no moral compass, and fears no accountability…because no one has ever held their feet to the fire for the crimes they’ve committed.

Unafraid to tell it like it really is, Kavanagh takes direct aim with his words, and through “Mercy” – the twisted title’s irony a reflection of how the church and state have shown NONE to their victims – he puts incredibly vivid imagery into his lyricism that details the brutality, and reminds us all that the horrifying impact these sinister encounters create, continues to last forever & ever, amen.  “You liar, you thief, you swore…to protect them” – Pete is pulling no punches…he is sparing no quarter…he is, for as controlled & cool as things may appear, completely red-hot nuclear as he sings this song, and puts in this incredibly effective live-wire energy to his words that makes every syllable come alive with a frantic intensity & unpredictable, threatening venom.  It’s like the kind of writing you’d expect to find in a Mark Lanegan song…and again, forgive the language y’all, but I just fucking LOVE IT.  It’s powerfully poetic, fearlessly direct, and executed with spectacular vision – essentially what I’m tellin’ ya is, Pete Kavanagh & his crew…from Hally, to William McCormack, to Graham Hopkins…everyone dialed right into this dark theme with the supreme focus you wanna hear in every ticking second to make this moment real as real can be.  As a result, they collectively hit everyone right in the gut with its seething mood & message as it sends shivers down your spine that’ll continue to haunt your bones long after you’ve listened – “Mercy” isn’t the kind of experience you’ll forget any time soon – and if that ain’t the mission accomplished, I don’t know what else it could be.  Pete set out to create awareness and cause a stir in your soul via the theme, textures, and sullen tones of “Mercy” – and man…you gotta give credit where credit is due; the songwriting is spectacular, but it’s the performances put in, that makes every word & note come ALIVE.

The confidence & conviction you hear in this song…is astounding.  The resilient spirit at the core of the writing, the performance, and within the video, is exactly the kind of combination of message & music that’ll resonate strong within the hearts & minds that are listening…and hopefully, inspire them to act.

“Mercy” is the third single released from Pete Kavanagh’s upcoming album Join Up The Dots, arriving online officially as of November 5th this year – make sure to be the first to know when it gets released by staying connected to Pete Kavanagh through his main website at:  https://petekavanagh.com