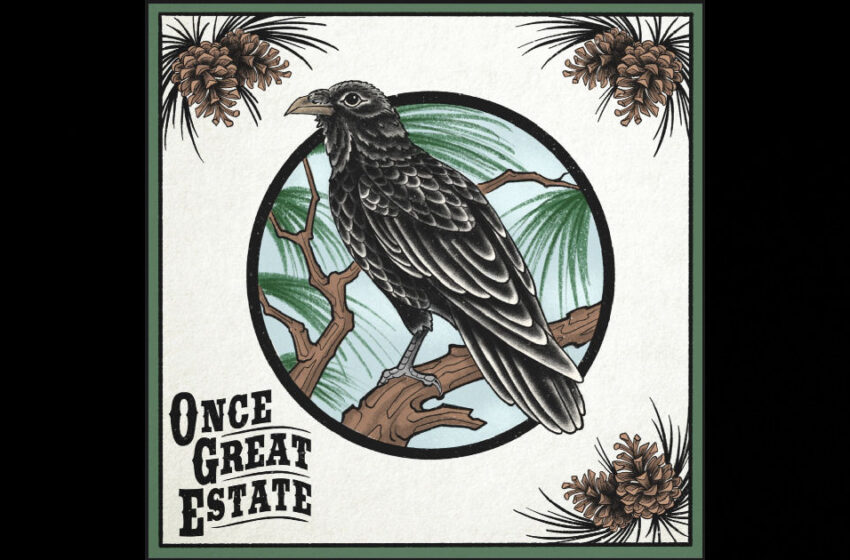 Once Great Estate – “Even The Undertaker” / “Shelbyville Inn” – Singles Review

Any chance we can convince Tracy Horenbein to come on over to the dark side to the Indie genre?  She’d be a perfect fit I tell ya.  Couldn’t you hear her singing a song like “Drivin’ On 9” by The Breeders to exquisite perfection?  Anyhow.  She’s making Americana/Country/Folk music at the moment & there ain’t much I can do about that, aside from encourage her to cross over…and I wouldn’t ever recommend any artist or band goes switchin’ up their style just to suit my own personal taste.  Y’all do you, I’ll keep on doin’ me, and somewhere in the middle, I’m sure we’ll meet up at a couple of points that naturally intersect.  Once Great Estate is a good band with solid players, a lot of character in their songs, a new album that came out in the summer of 2021 called Even The Undertaker, and an organic, charming appeal to their music that is bound to snag its fair share of the attention with all you wonderful people listening out there.

All-in-all, Once Great Estate has a very pleasant vibe goin’ on…despite the grim realities they present through the summation of what “Even The Undertaker” is all about, however realistic it may be.  A song that reminds us we all leave this floating rock that we’re on the same way, more or less, the title track of their latest record reveals a lot of genuinely tight musicianship, production, and writing at work – if there’s a song you’re gonna listen to this year that sounds like it’s happening right there in front of ya while you listen, it’s this one right here.  There’s a whole lot to love about the way a cut like this has been put together…Once Great Estate isn’t fighting for your ear-time here, they’re getting it naturally – it’s like they were gonna play this song whether or not anyone out there was ever gonna listen to it at all, and there’s something remarkable about that.  Solid players through & through…and a humble vibe that seems to impressively inherent to Once Great Estate that it’s something they should wear as a badge of honor.  Chances are, it’ll be the fiddle of Christopher Ash that stands out to most ears on this particular cut and the instrumentation, the dude gets a significant amount of time in the spotlight to solo & whatnot, and the man makes those strings do the talkin!’  Overall, I’d imagine Tracy still steals the show & rightly so…I felt like she absolutely nailed the lead vocals of this song in every way – and the only thing that might rival her for my ears personally, was the amount of personality that’s added in from the background vocals chiming in along the way.  Believe me folks, I hear a whole lotta songs over here – what you’ll find added into the background, particularly around the second-minute, is straight-up freakin’ fabulous.  Think of it this way – it’s an element in music that’s vastly underused when considering the potential that exists – when you listen to how Once Great Estate approaches the vocals en masse throughout “Even The Undertaker,” you realize their ideas expand to every angle…that not only has the work clearly been put into these tunes, but a tremendous amount of thought as well.  It’s about the details here y’all – I’m not arguing that “Even The Undertaker” wouldn’t be similar to something you might have heard out there…perhaps…but what I am saying, is that nothing has been overlooked from concept to execution on “Even The Undertaker” – and it’s because of that, maybe more than anything else, that it stands out as brightly as it does.  Once Great Estate comes out with an incredibly down-to-earth & grounded song about leaving this planet for the heaven or hell awaiting us – but you’ll just have to have a listen for yourself to find out which one of those places we’re all goin’ to…

I would probably advocate on behalf of “Shelbyville Inn” being that much more accessible if we’re comparing the two songs I’ve got here together – just keep in mind, you get both on their brand-new record, so it’s not like you HAVE to choose, you follow me?  “Shelbyville Inn” has the advantage of a more upbeat vibe in the music that’s just gonna naturally connect with the people out there listening, it’s kinda the nature of the game.  “Even The Undertaker” would be more geared towards the dedicated Folk-fans and those that dig real quality songwriting & artful tunes – I suppose that’s the difference.  Like…maybe the best way I can put it is that, where a song like “Even The Undertaker” is more of a daring surprise to receive as a single – a cut like “Shelbyville Inn” is the kind of cut you expect to find.  Not that the song itself is expected – it’s still plenty unique – I’m simply talking about the presence of what’s undeniably single-worthy sound – that’s what “Shelbyville Inn” has, and right from the drop.  In terms of the band overall, I also felt like this track was a lot harder to pick out individually for any one element that made it stand out more than the others did – everyone plays a significant role here, and the balance is impeccable.  THEY stand out, together, unified as one on “Shelbyville Inn” – and it makes for a spectacularly engaging and energetic song as a result.  What I’m not doing, is arguing that one is any better than the other – I think there’s value in both of these cuts, for truly different reasons, but both work well in their favor.  Personally speaking, I’m more apt to dig on the songwriting in a tune like “Even The Undertaker” – but I’d be lyin’ to ya by omission if I didn’t point out that the way “Shelbyville Inn” is played is so enticing it could easily bring in listeners from all over the place, inside & outside of the genre.  The value in a song like that of course, is priceless – it’s exactly how you pull in people on the fringe like myself…you’ll hear a tune like “Shelbyville Inn” and recognize it’s really not all that far removed from an artist like Sheryl Crow at the fundamental roots of the hooks and songwriting – and then you have to acknowledge how much MORE there is going on between the six players this band has contributing to this track.  Listen to both of these songs though…right through to the end, as you should – but notice the fact that, on each, you’ll discover a final twist in the direction of each tune that seems to put the cherry right on top with perfect placement.  Each time I listened to both of these songs, I felt like I had no problem enjoying what I was hearing for this reason or that as they played – but within that final twist of both “Even The Undertaker” and “Shelbyville Inn,” I felt like Once Great Estate offered a glimpse at the real magic that they possess.  Tracy can write a fantastic tune, no doubt about that – and the band she’s got along with her in Christopher, F. Matthew, Jeffrey, Steve, and Jon can execute with the best of’em out there…but yeah…there’s something about these final twists in their tunes that seems to reveal a special uniqueness that’s even more defining to their sound overall, even as subtle as it appears.  So I’d keep tapping into all this, Once Great Estate – I’m not hearing any concerns here at all, just quality songwriting and stunning execution from production to performance – great job y’all.

Find out more about Once Great Estate from their official page at:  https://www.oncegreatestate.com