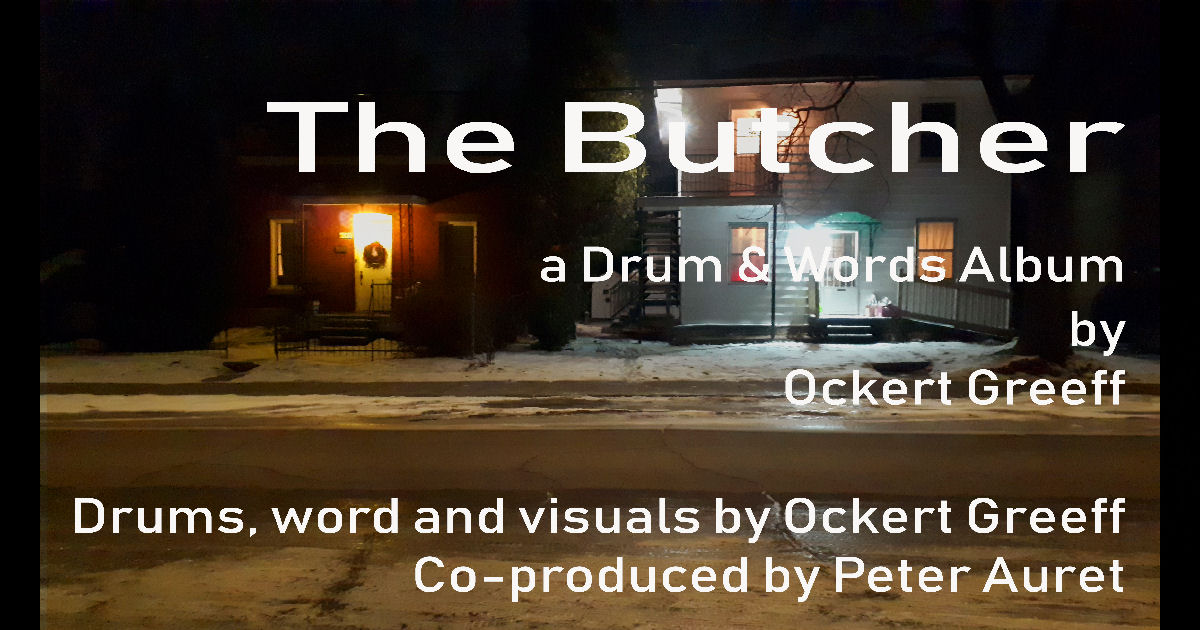 As I was scanning the music for the week ahead a while back, I came across a record that immediately caught my attention.  Don’t get me wrong – that doesn’t automatically make it a given that what I was listening to is for everyone – even Ockert Greeff knows that the music he’s making is beyond niche in almost every way.  But if you’re as in to spoken-word as I am…or if you dig artistic combinations of music that combine killer drums and poetry…first of all, you’re rare & awesome – but secondly, you’ll likely dig on Ockert Greeff’s bizarreness just as much as I do.  At the very least, be brave enough to give this a shot – you might seriously be surprised at just how rad The Butcher album really is…so what if you can’t sing along?  Music has been & always will be about multiple forms of expression – spoken word is one of’em.

Besides…ain’t ya bored of verse/chorus/verse stuff  by now anyhow?  Artistically recharge yourself by reaching out into the random…experience a quirky record like The Butcher, step outside of your normal comfort zone, and try something intensely unique like what Ockert Greeff is doin.’  I can pretty much guarantee, even without knowing the guy, that he probably didn’t play like the other kids played in the ol’ sandbox.  No…an artist like Greeff has almost certainly displayed uniqueness throughout his entire life in one way, shape, or form…just so happens that it’s through music now…but I imagine, it could have been anything.  If there’s an outlet for expression & artistic integrity involved, I bet you’ll find him there.

You’ll find six cuts on The Butcher – I’ll meet you halfway & discuss three of’em here today in this review.  I’ll even do you the courtesy of talking about the first three, so you can let your natural need for symmetry & a proper conclusion carry you to the pages of Greeff out there online afterwards in an effort to put your curiosity to rest and finish this record…when you’re ready to handle it, of course.  For myself personally, it was only fair to start at track one…because as weird as this dude may very well be (and most certainly IS) – he pretty much had me at hello on the record’s first track called “Suffer.”  The difference between a song like this and ‘regular’ music out there is immediately apparent – so of course that got my attention quickly; knowing I’m in for an artistic experience is something that always gets me excited.  Discovering it was a spoken-word record, I got even more amped-up – that too is exciting to me – but substance needs to come along with those words, or it would all be for nothing – and that perhaps, is where Ockert’s music shines brightest in the dark.  “Suffer” will start off with a storming flurry of drum beats creating a tribal-like atmosphere, complete with percussion added-in via the microphone, with Greeff supplying breathy-noises to fill in the space with an extra layer of eeriness.  He’ll also start off The Butcher with one of the album’s most brilliant questions as he begins, saying: “Oh come on now…who can say ‘I thrive’ with a straight face?”  “Suffer” will go on to relate, compare, and contrast the concepts of suffering versus thriving – and how that plays a role in life & how we live it.  “I suffer WELL – much better than I thrive,” says Greeff on “Suffer” – and you’ll definitely believe him by the gripping tone of voice he applies to this first track, and the stern sound of his accent strengthens the force of his words even more.  And whatever your opinion may be on the song itself, the words, or the music – appreciate the fact that Ockert’s already putting himself out there with something genuine to SAY (and you KNOW we love that here!) – he might not have the most sunshine & rainbows perspective you’ll hear in 2019, but recognize the amount of authenticity in his lyrics, and the uniqueness of the songs you’ll find on The Butcher.  Artists like Greeff don’t make music like this expecting to find their way to the radio one day – it’s made for the pure love of the game – he might “Suffer” in many situations & circumstances in his life, but creating poetry, music, and art…well…as I’m sure he’s learned, those are areas of life where the suffering can really pay off.  Not monetarily of course…spoken-word’s even tougher to make a buck on than ‘regular’ music is – I’m talking about personally, cathartically, artistically…these are the places in life where our own satisfaction is so sorely craved, and so little often achieved.  Ockert’s given himself an opportunity to get all kinds of thoughts & emotions into the open.

And as you might expect from a record called The Butcher, you got it – some of those thoughts & feelings are downright creepy, strange, and eerie.  Or are they?  LISTEN to a track like “Offal” and recognize how Greeff is using his strengths to his advantage.  Does he know the music and tone of his voice are gonna creep us right the fuck out on this second tune from the album?  YES.  Yes he does.  Does he load it with lyrical imagery that’s dark, descriptive, and designed to cling to your bones?  YES.  Yes he does that too.  YET – if you’re listening closely…you’ll find that “Offal” is more than likely G-rated, innocent, and inoffensive…a simply explanation of facts, questions, & statements strung together in what may seem or sound like it’s intended to be malevolent – but then you have to recognize that, Ockert’s really not said anything at all that’s too directly cutting.  It’s beyond frightening – but it’s all 100% implied, in our minds, and all by design.  What he’s really done here, is allowed our minds to wander, project, and interpret what we hear…and quite honestly, the results of which, will tell you something about YOURSELF as a human being & the way you choose to absorb audible information.  Maybe Greeff’s just super concerned about making sure we all know how to properly dissect a carcass and extract all the meat-parts from the gross-stuff…maybe he’s doing a public service on “Offal” by offering us all some bloody brutal education…or maybe he really, really, really IS trying to scare the shit out of us with the giant sound of the drums making it sound like we’re all about to be cannibalized out there in the jungle somewhere, cooked up in some huge pot to become the native’s human-stew.  I’d imagine Ockert is well-aware of the uncomfortable feelings & vibes that a song like “Offal” pumps out – and I’d imagine he’s got to get an even bigger kick out of this song by how innocent it really is at its core.  He knows how we’re all gonna hear it…and that in itself displays a real tightness of focus and a mastery of execution…because “Offal” really will make you uncomfortable, despite its inherent & bold objectivity in the words.  Kind of like how Tool’s “Die Eier Von Satan” worked in a way…more subtle perhaps, but that same projection of an evil sound that leads us to believe what we’re hearing is likely a ‘bad’ thing somehow…it’s only when you step back from it to examine it all for what it really is that you find it’s not.

The latter-half of the record…songs like “The Space Between Them,” “Dead Metaphors” and “Anthem” that finish off The Butcher are all equally worth your time if you dig what you’ve heard on either of these first cuts from the album for sure.  It’s definitely the kind of record that you’ll know within thirty-seconds or less whether or not you’ll be able to hang with its entire set-list.  I know I did – it’s a short record, but it’s stocked full of badassery & real artistic ideas.  I kept on spinning through this poetical madness & music like it was freakin’ Christmas morning over here – because that’s just who I am dammit…I love these kind of off-beat creations from Ockert Greeff; this is the exact kind of bizarreness that makes my entire world turn round, like Ception Of Ty from last year.  So you bet I kept listening…but for the record, the first song I actually heard…the very reason I KNEW I’d want to keep listening from the very get-go…was actually from a miss-click on the record’s third track, called “Babyface.”  It’s not exactly like things have been anything close to ‘normal’ to begin with, but “Babyface” likely gives you one of the biggest highlight examples of the strange streaming of consciousness thought-process that guides this bizarre record out there in the independent scene.  Musically, it could probably also be argued that you get a bit more in the hypnotic & mind-bending sounds you’ll find scattered throughout this tune as well – buy lyrically, that’s likely where you’ll notice the main differences as Ockert allows himself to slip straight into this concept and down the rabbit-hole as far as he’s able to go.  Appearing controlled, level, and ‘normal’ himself at first, “Babyface” continues to descend into high levels of observations & descriptions of what Greeff is seeing on an adventure outside in the world with the public…before lacing this cut with even higher doses of straight-up odd paranoia.  Still as poetic as ever – as I’ve said many times, we’ve all gotta write about SOMETHING – so why not an army of babyfaces taking over the planet?  I’ll fully admit, the shock-value alone from just how different the music of Ockert Greeff immediately was to me when pressing play on “Babyface” for that first experience played a large role in enticing me in to listen to the rest – but you’ll find it goes deeper than that…all these cuts from The Butcher do.  It might be strange, it might be weird, it might be bizarre – in fact, I can tell you that this album IS ALL of those things for sure & more – but at the end of the day, it’s also a record that has genuine perspective, artistic & clever concepts, and 100% real talk.