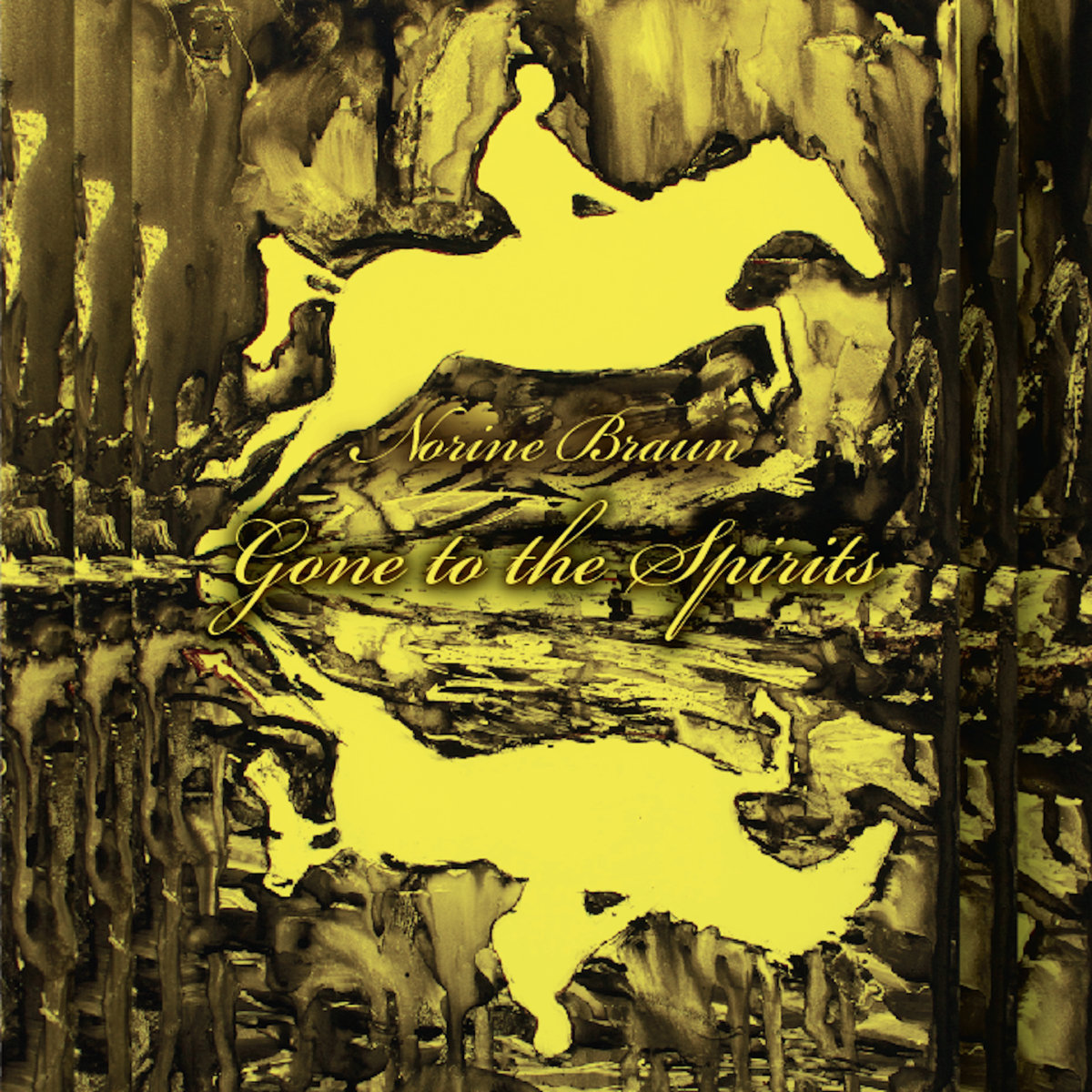 Norine Braun…based out of my own hometown, back in good ol’ Vancouver, British Columbia…I wonder if that’s why I feel like I recognize this name somehow.  For the record, I haven’t had the privilege of meeting this spirited artist…but I feel like her sound/style of music must have had her on the same billing as a few artists we’ve worked with…I know that name don’t I?

Anyhow…I’ll press on for now…maybe the tie-in will come to me, maybe it won’t – either way, I feel like I’ll remember her name now that I’ve heard her music.  We’ve got our hands on an album-sampler containing the first six-tracks on her new record Gone To The Spirits – and Norine sounds fantastic!  She keeps it literal in the very first moments with a spoken-word reading in the opening “Spoken Word One.”  Beautiful imagery and descriptions in the words begin the album, and then it starts quickly into the hypnotic “Morning Prayer.”  I absolutely love the way that Norine has handled the vocals here on this first song…great echo effects on them fill the atmosphere in a stunning way.  The additional saxophone sounds ringing out against the jangle of the sweet chords from the acoustic guitar…it’s all really well thought-out and paced-out – the build on “Morning Prayer” unfolds like the sunrise; it’s beautiful to behold.  The slight & subtle percussion that gallops into the song, the additional synth sounds and sparkling elements in the atmosphere are mapped out like stars in the galaxy.  With a minute to go, “Morning Prayer” continues to soar upwards and straight into the stratosphere via instrumental-means…and by the time it comes to an end I feel like I’ve gone completely to another world and back again.  THAT is the power of a writer that really understands how to captivate through music and create an atmosphere in sound that you can truly see in your mind – “Morning Prayer” is fantastic and a beautiful start to this new album.

“Rock People (Yaqan Nukiy)” was interesting to me right away as well; it seems that Norine is making like…an entire style of music I’ve never really experienced before – and that’s a good thing isn’t it?  I can think of some comparisons…like maybe Mazzy Star, or Esthero in some of her more artistic-tracks…maybe “Rock People (Yaqan Nukiy)” might even remind me a little bit of like, Stereolab…but really, this is all-Norine-territory here.  New.  I love what I hear on this second track…again, hypnotic in through the combination of drums and guitar notes…and absolutely beautifully sung by Norine.  Whatever style of music you’d want to call this – it’s certainly beautiful to me – can that be a genre?

The relaxing vibe of “Rock People (Yaqan Nukiy)” and its new-age-meets-trip-hop atmosphere melts into “Coyote (Skinku¢)” and a rhythmic guitar.  I’ll say this…I still liked Norine’s performance…I think it has class, grace, rock, and some serious moments where it’s all riding on her to pull this one off; as a song, “Coyote (Skinku¢)” is a tougher one to judge…it’s a little disjointed in its assembly, maybe a little done in the melody of the chord-changes of the up-tempo parts, and a bit of struggle with the words fitting to the meter on this one.  I think that Norine still manages to do it, but not with the ease we’d heard so far beforehand on the previous tracks…and I also think the more low-key parts of “Coyote (Skinku¢)” are quite well-done…but yeah…it’s a bit of a rollercoaster in terms of its structure, but still plenty of reasons to take the ride.

When I was listening to “Star Man (Ode To Koo Koo Sints David Thompson)” I had to check into who was playing on this album, thinking to myself that I was about to read an entire list of crackerjack studio-musicians that had come in to lend a hand on some of the other instruments – and it turns out there is NO ONE else other than Norine on this music I’m hearing!  I’m honestly kind of speechless really.  I’m not here to butter anyone’s bread…I tell it like it is as far as I hear things in my head…so believe me when I say, this woman is fantastically and universally talented.  Whether it’s the bass, the guitars, the drums, surrounding elements or the vocals themselves – Norine is leading herself in all the right directions – and she’s doing it on her OWN.  That’s beyond incredible.  Seriously…I’ve heard many musicians that can hold their own on multiple instruments – but with this…it’s different; it’s like Norine has found a way to get her skills on every instrument to an equal-parity…she clearly has skills in every single department.  Even piano I’m guessing?  “Star Man (Ode To Koo Koo Sints David Thompson)” starts out with beautifully played melody on the piano and re-invites the echo-effects of Norine’s angelic vocals into the music and spacey-atmosphere of this tune.  Great chord changes and instrumentation once again…“Star Man (Ode To Koo Koo Sints David Thompson)” is kind of that middle-of-the-road kind of accessible.  I dig the spaced-out, swirling atmosphere of the verse…the chorus and its transition I dig as well, however…that’s heading into more musician’s-musician terrain whereby the hooks will certainly attract other music-heads out there strongly, but might miss the everyday music-lover with their complexity.  Still…the inviting tones and free-floating feeling of this tune might just win the people over more easily than I think…it’s a pretty powerful tune and another example of the mastery of atmosphere in Norine Braun’s music.

So yeah…verdict overall is a solidly positive opinion of Braun’s ambition and music.  Listening to the final track of the sample we’ve got from Gone To The Spirits called “Sometimes The Rain Comes” you get a dose of an uplifting to the music.  Love the beat of the drums on this one and how they echo the sound/idea of thunder…and the use of natural-sounds from real rain and thunder work incredibly well to add to the overall vibe and atmosphere.  The breakdown approaching the three-minute mark sounds absolutely fantastic…I think Norine sounds very powerful here, like she can control and command both the elements and emotions around her.  She’s strongest in the chorus…I think the verse has a few minor spots that maybe another take may/may-not have helped…it’s hard to say for sure.  I like the idea overall…and once again, I love the way that Norine builds the atmosphere of her material to really take you away from wherever you are entirely if you just close your eyes to listen.

It’s good stuff!  Never did figure out where I recognize the name from…but considering this is her 10th album…chances are I did see it on a poster or something somewhere along the lines as I grew up in the Vancouver scene.  The important thing is that I’ll certainly remember it now!  Had a sneak-peek at the rest of the tracks from Braun on Gone To The Spirits…and I can certainly vouch for their quality and stunning sounds just as much as what I’ve heard and commented on here.  In fact…it started immediately – I loved “Bird With A Song To Sing” which was the very next song to follow…but that’s another story for another time!  Great job Norine…even though I’m just discovering the music on the 10th album, I’m happy to be climbing aboard the bandwagon now.

Find out more about the music of Norine Braun at her official homepage:  http://www.norinebraun.com/

At the time I must have missed the credits or not been able to locate the information on the full-list of players on the new record from Norine.  She politely clarified that she was surrounded by fantastic talent in the making of this album, namely musicians Adam Popowitz, Elliot Polsky, Huggybear Leonard, Alice Fraser and Malcolm Aiken (who played flugelhorn not sax like I’d claimed).  Apologies for the error on my part and many thanks to Norine for taking a moment to acknowledge the talented players she played with and letting us all know their names to get credit where credit is due.  Here I was, thinking she was the musical superwoman of all-time!  Ha!  In either event – she’s a fantastic talent, and now we know she also had a whole host of equally incredible players and musicians helping her bring her vision, ideas and music to life.