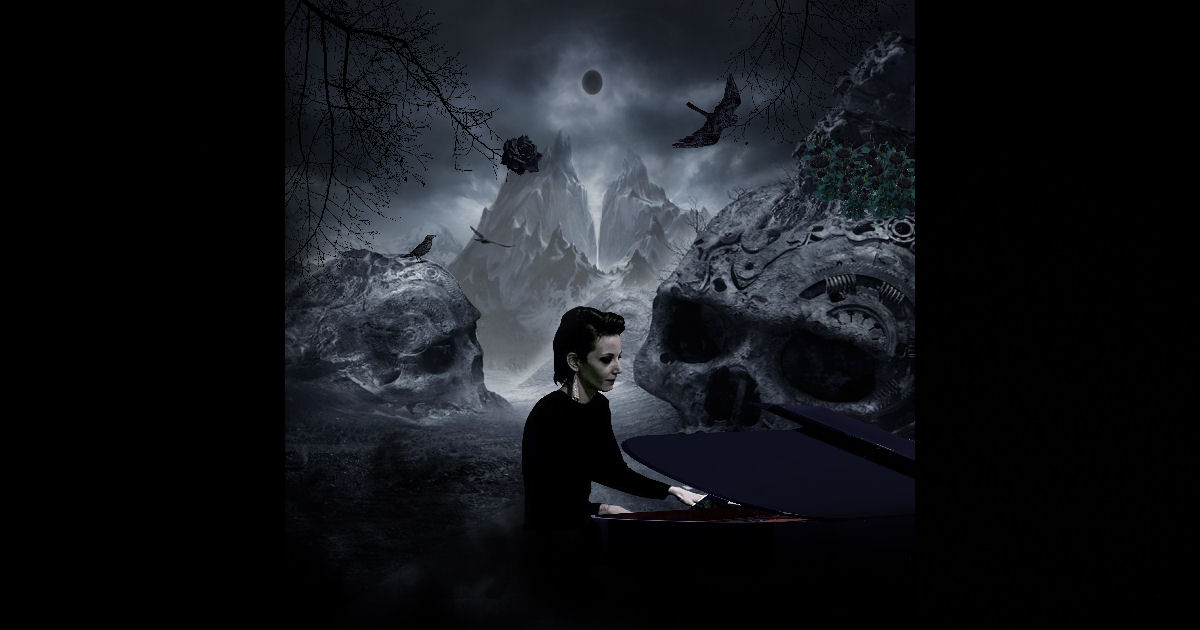 Reading about Nicole C and checking out the all the music she’s released over the past several years tells a slightly different tale than the one you might read here today.  A songwriter, a composer, a musician – she’s taken on all kinds of different styles & sounds, she’s a professional pianist and has focused much of her time on majoring in Classical music.  She’s composed music for films as well – there’s no doubt whatsoever that she has what it takes to succeed when it comes to her own natural talents and skillset.

But from the sounds of things…Nicole wants more from her music.  And depending on who you are as an artist, sometimes ‘more’ can be a different approach or direction, sometimes ‘more’ can be a collaboration or shift in style – and sometimes ultimately, less can certainly be ‘more’ as well in terms of what comes across to us as listeners.  If I’m being entirely truthful…many of the instrumental songs I poked open from her YouTube channel were absolutely spectacular to listen to…but none of those are the ones I’m here to talk about today – they’re in the past.  Every one of these songs have vocals as Nicole takes her songwriting into the true spirit of collaboration and is featuring all kinds of guest-stars singing the words to a couple singles & a few tracks from her record called Chained In My Own Mind.  But while an artist like Nicole can certainly be established and enjoying a fruitful career that’s she’s already achieved – any new artistic endeavor is bound to throw some new challenges in the mix to even a veteran of the scene – and there are a few here that you can hear for sure.  Lots of great things going right too for sure – but still a few corners to round out – she’s got about 1000 more credentials than I do and clearly knows what she’s doing – I’m just about anything other than any kind of professional and I’m sure she ultimately knows a heck of a lot more about music than I probably ever will.  Those are the facts, there you are, there you have it.  We’re all on the same page now – let’s discuss…

The major advantage that Nicole C has in being a songwriter, is that she can test out a variety of styles – all four of these cuts in review will reveal different aspects of how that can be adapted to their own unique vibes, and through the featured guests she invites into her work, she ends up with quite a range of sound.  I started with the title-track from her collaborative record, “Chained In My Own Mind” – which features vocals from Deibys Artigas and guitar from Max Waynn of Drenalize in addition to the music & lyrics provided by Nicole.  And in my opinion, this is where you can hear this songwriter pursuing more out of her writing via the featured guests…you can hear from the underlying piano melody that she’s playing throughout this tune that “Chained In My Own Mind” would likely work just as well as an emotional piano ballad done solo – so it’s noteworthy to realize she’s chosen to expand her ideas.  The guitars from Max are killer…dude can shred there’s no question about that…and for the style of music that this song ends up becoming in combination between him & Nicole, Deibys honestly hits the mark perfectly to complete the sound.  That being said, there are challenges in the sense that you don’t typically find too much of this style in the mainstream anymore – but that hardly means that an audience doesn’t exist…it just thrives online now instead.  I can think of countless scores of people in my old hometown of Vancouver that would love this cut…Deibys actually reminds me quite a bit of good ol’ Ruddy from the local metal band Aeterna based out of BC in Canada.  I also think that…not only does he do an exceptional job with the vocals – he rises to a challenge that Nicole C continually presents to these singers in ALL of her songs…which is ultimately an extremely non-conformist & poetic style of songwriting.  Notice just how much she’s not adhering to any particular kind of rhyme-scheme with her words and how she phrases her writing; for those of you out there that don’t sing yourself, you might not actually realize just how hard of a challenge that can be for a singer to pull off when the words themselves don’t end up flowing in that natural rhythmic pattern.  In situations like these, that’s where it lies upon the singer’s shoulders to supply the words with the melody they need in order for it all to work – and that’s where Nicole finds success through the talented guests she’s chosen like Deibys.  I like the franticness of the emotions on display in the lyrics and the controlled way that Deibys sings them, particularly in the verse…I’d probably advocate for a bit more out of the chorus, but sometimes the magic of repetition can work wonders when it comes to creating a hook that the masses will remember.

I then stepped slightly back in time to check out the debut single from the upcoming album, a song called “Desperately Miss You” featuring the spectacular Marisa Frantz.  Let’s be clear – when it comes to the piano background of these tunes – ANY of them – everything Nicole’s doing is pure gold as far as I can hear.  If anything, I think she’s decidedly playing a secondary role throughout much of the mix on these cuts…which is a likely side-effect of having featured guests…you want them to play a prominent role when you bring someone aboard to collaborate – but she’s truly an amazing player and mix-wise, I felt like “Desperately Miss You” could still bring the presence of her piano up a bit or dial-back the rest.  Because believe me – there’s not much I can think of that you could do to any element of any song she’s on that could hold Marisa back from standing out – she’s fantastic.  As I continued to spin this set of singles, I kept on coming back to this debut tune as likely being my favorite one of the bunch – I’m a big fan of how Marisa was able to reach the core of the melancholy mix of beautiful & complex emotions that Nicole has written into the fabric of this forlorn love-song.  She nailed it.  In addition to supplying an amazing performance on the mic, she’s also added essential instrumentation to this track with her violin parts giving even more depth & dimension to the haunting melody & sound of “Desperately Miss You.”  But for real Nicole…don’t be over-cautious with what you’re bringing to the music – the piano is the most essential backbone in the writing & melody of the songs you’re creating & my advice would be to make sure it shines just as brightly…everything I hear is excellent, but it is tougher to get to from a listener’s perspective, because it’s in the background as opposed to playing the starring role it perhaps always should be.  There are a few moments where it gets the spotlight on “Desperately Miss You” – I suppose maybe I’m just being greedy by wanting more…I’m a piano-addict and I love the way she plays.

“Al Ritmo Del Mar” takes the largest departure in sound, featuring the vocals of Ana Alicia Jimenzas and backup vocals from Sam Clem inside of a more rhythmic island-style vibe.  Three singles so far, three wildly different styles – just like I was tellin’ ya through the beginning of this review.  There are things I really like about this tune and a few spots where I was less sure about it; I like the brightness of the vibe, but there’s also a noticeably contrasting dissonance that creeps into this melody at times that might work against that energy.  Best way that I can think to put it, is that there are spots where you’ll feel like the melody in the vocals needs a bit more spark, energy, life, or brightness to it to match the vibe of the music.  I think Ana Alicia does a great job for the most part…I don’t know specifically that I’d put the quirkiness of this cut on her shoulders alone…it might be the layers & harmonies that somewhat nullify the vibrance of the potential for the sound of her vocals, but as far as performance goes, it still sounds like she’s put in the effort and does a solid job.  The music sounds playful and fun…the vocals are more pensive and moody…which makes for kind of an odd-pairing at the end of the day, but each of these elements also have their own strengths individually.  Nicole takes on an additional role as the producer on this cut as well, handing the lyrical duties off to Ana Alicia, who sings “Al Ritmo Del Mar” in Spanish.

If it wasn’t for “Desperately Miss You,” I might have chosen “Stay” featuring Katja Macabre & Sam Clem as my favorite from this selection of singles…but I think the powerfully emotional way that debut single makes an impact still ended up being number-one for me.  Not that it’s really even fair to compare ANY of these tunes together…you’ve got the thread of them all being written by Nicole C, but really, there are four completely different personalities on display throughout these songs…so keep that in mind.  “Stay” works a sweet & subtle vibe, charms with additional trumpets providing even more melody in the atmosphere of this chilled-out, nearly Reggae/Pop vibe…or island-style tune…whatever you want to call it or categorize it as, this single delivers on keeping it mellow & smooth throughout its duration.  I definitely appreciated the added personality & character it felt like this track had…I liked the electro-elements that opened the tune and the ticking hi-hat sounds dancing throughout the rhythm.  Katja gives a noteworthy performance and brings a lot of style & skill to the microphone, sounds good with Sam as well in the harmonies…it’s a collaboration that I felt worked with the right energy & got to the heart of this subtle vibe.  A tune that celebrates love & music as one, “Stay” also highlights Nicole’s adaptive writing, providing another unique spin on how her songs sound through yet another different vibe that allows her work to shine in a whole new way.

Definitely a unique collection of collaborative tunes, celebrating the true spirit of music in all its blissful diversity & versatility – listen to more music from Nicole C at her official YouTube channel here:  https://www.youtube.com/channel/UCmB_RjZgYVYDd7bxELNdTCw