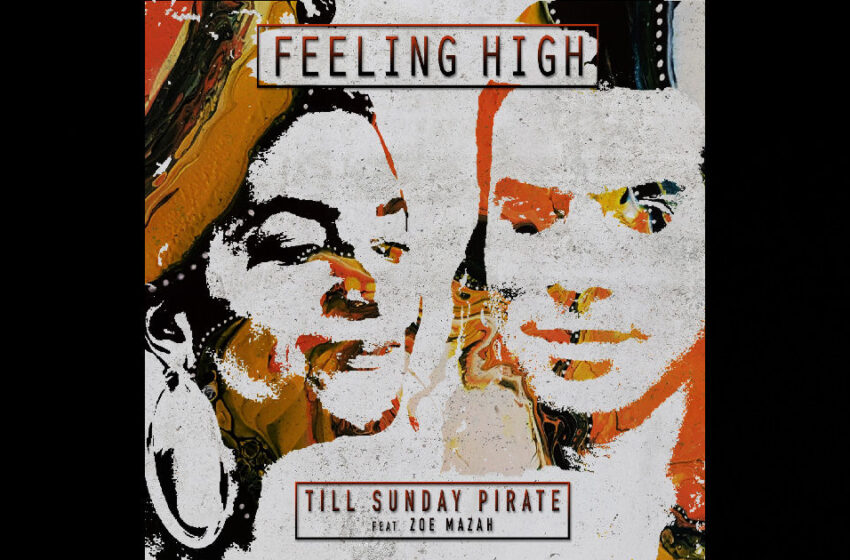 Ahhh y’all know I love it when I get the opportunity to explore music that’s being made far, far away from where we’re based out of here in Canada – and thanks to good ol’ Natural Groove Records, we’re doing exactly that today as we check out a couple of projects based out of Portugal.  I’ve got stellar new music on my playlist here from Till Sunday Pirate and a trio that goes by the name of LAGARTO as well – they both have great energy goin’ on and new tunes that you’re sure to dig on as much as I have been.

No time like the present, as they say – let’s crack into these cuts & listen to what Portugal’s been up to!

“Positive vibes only,” says guest-star Zoe Mazah on the new single “Feeling High” by Till Sunday Pirate – and though I never like being told what to do, I’ll allow it this time.  I mean…it sure seems like they’ve got good intentions, and I’m not one to argue against positivity in a world that’s got that particular trait on an increasingly short supply.  The people out there listening should have no problem at all diggin’ on this – not only does this international collaboration sound great together, but they’ve clearly got the right attitude & perspective as well.  Positivity is a genuinely contagious thing when it comes to making music – and one of the aspects of sound that translates easily right around the world to everyone listening – Till Sunday Pirate and Zoe have got the vibe, and I have no doubt whatsoever that “Feeling High” will reach the heights of many a playlist out there to the very top spots on’em.  From what I’ve read, Till Sunday Pirate is actually a one-man didgeridoo/sitar/Portuguese-guitar-based band – and c’mon now y’all…when was the last time you experienced listening to one of those?  It’s probably been a while, if you ever even have – but this is what I can tell ya…the positively infectious grooves of “Feeling High” will quite likely get you quickly exploring that whole side of cross-cultural sound a lot more, and appreciating its contributions just as much.  I know, I know…that’s kind of a pretty technical listing of the ingredients involved in describing what’s essentially the Soul-meets-Reggae sound – but like I said, these aren’t instruments that you typically come across in your everyday listening, so I figured I’d fill you all in.  It certainly gives the final results a uniqueness that’s audibly tangible, and between Till Sunday Pirate and German guest-singer Zoe (who sings in English for this song) – they put in a performance well worth ranting & raving about through a single that’s smooth, enticing, and wildly stylistic from start to finish.  All-in-all, it’s fair to say that “Feeling High” is designed for its entertainment value and setting the mood for your enjoyment on the dance-floor without feeling contrived or desperate for your attention – instead, this collaboration earns your favor by the natural ease in this collaboration and hooks that can’t be denied.  “Feeling High” is the kind of cut that people will have no problem gravitating towards…it’s a cut that truly flows with chilled-out sound from beginning to end – it’s mellow, yet equally exciting – and from the performance of Till Sunday Pirate & Mazah, to the professional production of Natural Groove Records, I felt like the attention to detail was there in all the right places to make this the single-worthy jam it becomes.  I’ll put it to ya this way – “Feeling High” might be my normal way of living, but this is far removed from what’s typically on my playlists, and I felt like I’ve got all the time in the world for this cut.

What I probably would describe as more of my type of jam, would be in what I hear in this instrumental track from LAGARTO…which is…honestly, quite the masterpiece when it comes right down to it – this is the kind of song I could spin forever and never get bored of.  Talk about flavor!  The musicianship is outright sensational and such an extreme pleasure to listen to – “Legado Do Antes” is as adventurous as it is entertaining, and stunningly well-played.  Like…for real y’all – it’s an awe-inspiring cut that should leave you every bit as speechless as the music is!  From what I’ve read about “Legado Do Antes,” it’s inspired by the music of a classical Portuguese composer by the name of Joly Braga Santos…and while I might be personally unfamiliar with his own body of work, I can tell ya that if it sounds anything at all like this medley does right here, believe me – I’ll be listening to the dude’s whole catalog in no time, and certainly a whole lot more from LAGARTO as well.  Because this…THIS…is just straight-up awesomeness by every conceivable definition…we’re talkin’ about viola, cello, and didgeridoo combined…three players in total playin’ it all, including the talents of Geraldo Gomes, Rita Carreiras, and the main centerpiece of LAGARTO in Renato Oliveira.  Together, they are undoubtedly something to behold and playing this song like their life depends on it, you know what I mean?  It’s a flawless performance, produced magnificently and played extraordinarily well from beginning to end…the kind of song that you can tell each player involved has a deep appreciation for the history of music & the roots of its luscious history.  Enticing to say the least – for those of you out there that enjoy a great journey in sound, believe me when I tell ya, you’ll find that in “Legado Do Antes” – the sheer amount of adventurous & ambitious instrumentation is bound to draw most everyone in and instantly pique your curiosity as to where a song like this will twist and turn next.

In short…to sum it all up as succinctly as I can for ya – if THIS is the sound of what’s happening right now over there in Portugal, they just might need to make room for one more person because I’m bound to pack up my things and move there – Natural Groove Records knows real talent, and both these tracks prove that.  Love what I hear in Till Sunday Pirate, and I’m astonished by what LAGARTO has created – they both provide complete entertainment that’ll satisfy each and every one of you, without question.

Find out more about Till Sunday Pirate at the official website:  https://www.tillsundaypirate.com