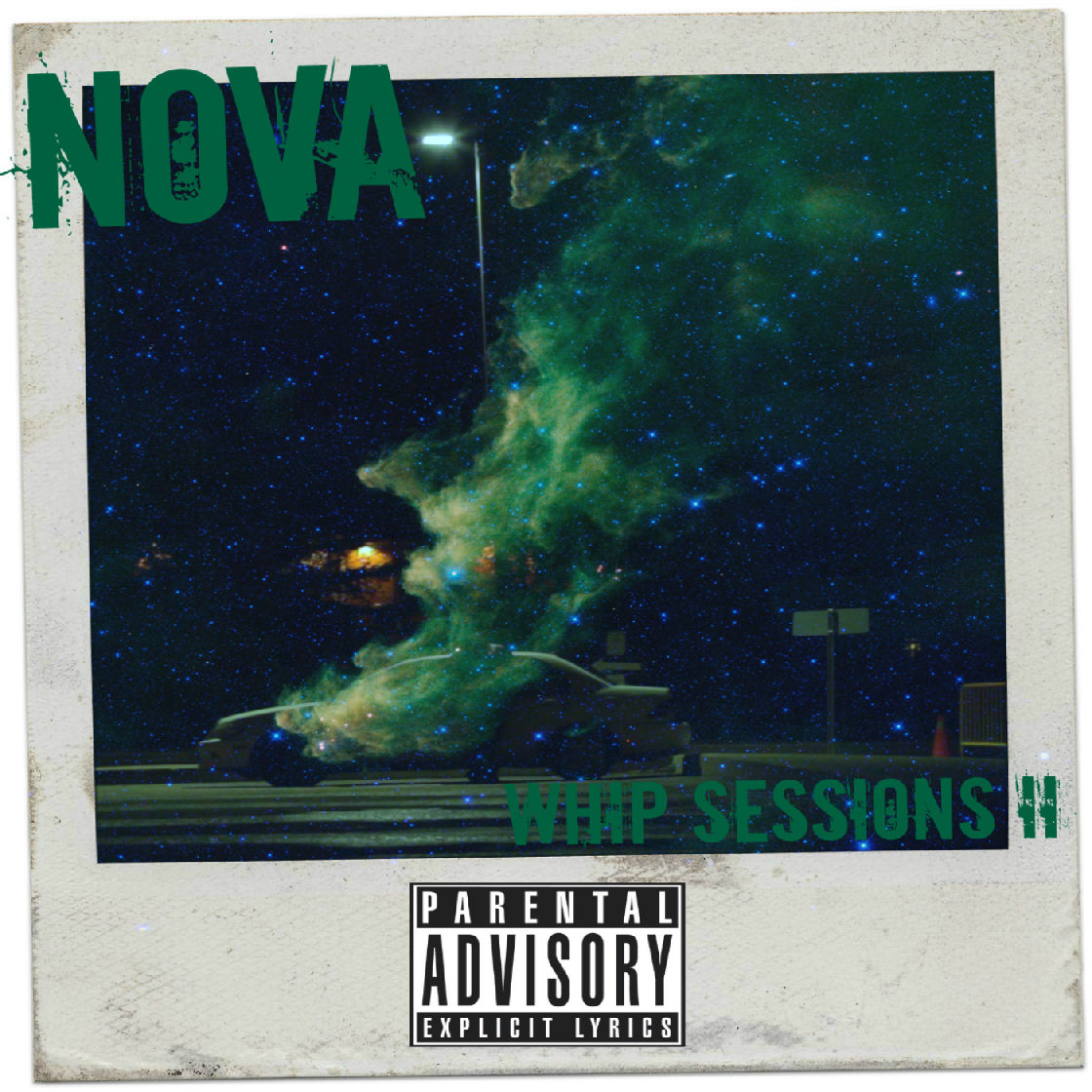 Great start to Whip Sessions II from independent hip-hop sensation N0va…the smooth sound of “The Go’ Round” proves that he is on that ‘whole different level’ and ready to make the most of this sequel; you can hear immediate improvement on what we’ve already known to sound impressive in the past.  We’ve had the privilege of checking out this emcee over the past couple years or so…maybe about a year & a half back we first listened to the prequel to this record with the first edition of Whip Sessions and then again on his most recent release prior to this on Hour Glass and he’s always brought something entertaining to the mic.  Whereas most people out there in the independent scene can claim to keep on listening – N0va knows we can back that up at sleepingbagstudios & that I’ve been genuinely in his corner, still spinning songs from his past records on the SBS Podcast…he’s never given me a reason to stop listening!  With the immediate hit of “The Go’ Round” providing a slick groove in the music and confident rap spit with precision – N0va comes out right on-point in the first cut with an inviting sound that carries a huge amount of widespread appeal.

A.K.A. ‘Track The Ripper’ – I didn’t know that about N0va yet…but I’m certainly not surprised.  In the self-anthem “N.0.V.A.” the beast we know as N0va tells the tale of going from Shawn Nova and changing into the man that he’s become today on the mic.  I dig the subtle beat on this cut…it’s got like, a mysterious & curious vibe in the music that really pulls you in…N0va keeps us madly entertained through the narrative that runs deep throughout the lyrics, revealing personal details and a firm establishment/announcement of his return to the grind here for Whip Sessions II.  Reminds me a bit of the tracks I like best from Cypress Hill…from the old-school of their catalog…the classics, you know.  I’ll say this…it’s not all that often I have time of day for a self-anthem from any band or artist, but I think N0va takes this style of song for as valid of a ride as I’ve heard by keeping the lyricism focused and making it much more than just a sweet excuse to chant the name and really created a story you’ll dig right into.  Real life for him, entertainment for us…sounds like he’s doing just fine from the words he spits on “N.0.V.A.” so I’m thinking it’s a win-win situation.

Things take a less-menacing tone on “K.O.T.H. (New York New York Remix)” – N0va sounds fantastic on this track and puts the energy into the words, smartly weaving between straight-up rap & more melodic delivery.  Everything works really well here…the mix on this cut is has real punch and depth – the kind of track that you’ll notice is on, even if the album was playing in the background.  But c’mon…you don’t have this in the background anyway…you’ve got a track like this turned up loud’n’proud.  As rad as the vibe in the music is, as excellent as the lyrics are…”K.O.T.H. (New York New York Remix)” makes its magic and establishes its impact through N0va’s enigmatic performance that leaves no beat behind.  Definitely an early highlight on the record and another track that has a ton of widespread appeal that’ll go the distance to bring in listeners from all over…N0va sounds right at his most confident & comfortable here, loosing up his approach but delivering it all with professional precision.

Between the combination of “K.O.T.H. (New York New York Remix)” and “Change It Up (College Boy Remix)” – the early first-third of Whip Sessions II finds serious strength as the record really kicks into gear.  N0va has definitely picked out some stellar beats to rhyme to on this new album and the texture and depth, dynamics and samples of what you hear on “Change It Up (College Boy Remix)” highlight just how focused this emcee has become.  The looseness of his tone matches the attitude of the words, and expression in the music…it sounds wild and seriously intense at times, but controlled & always on-point.  Great timing, solid wordplay that draws strength from clever references and a tight rhyme-scheme with delivery again making all the difference in the world; N0va’s clear, crisp and keeping it plenty real.

If you’re looking for memorable lyricism…look/listen no further than “Swingset (Slow Burnin Remix)” – this track was TOO MUCH in all the right ways.  The theatrical/classical nature of the music makes for a solid canvas to work with…but N0va chose not to paint with it – instead he loaded up that canvas with greens and rolled himself up a victory blunt!  I could say everything as simple as putting it like, everyone’s got their ‘smokin’ tune’ – well…this one is mine.  For the record, I keep several on-hand at all times…but right NOW…especially while I’m holding onto my bong with one hand and typing real slow with the other, THIS is my smokin’ tune – ya feel me?  In all seriousness though, N0va takes on a bit of a jazzy vibe to the way the vocals sway throughout this tune…it’s a relaxing ‘high’-point on the record.

With “Spun” I felt more confident about the verse than I did the main-hook of the chorus on this particular cut.  Could have been the mix…I’d probably sink the chorus-vocals into the music just a bit more here, but, that being said…just not sure the brightness in their layers & tone fit the atmosphere of this cut as well as what we’ve heard so far by comparison.  The contrasting low-end is massive in scope & sound…bringing in the hook with lower-vocal tones might make all the difference in the world…but maybe that’s just the way I’m hearing it.  Other than that, no issues…the verses come out with that matching energy & tone that fit solidly…still a decent cut, still good ideas…just a tweak here or there and I think N0va would get the max out of this one too.

In case you’ve forgotten…N0va reminds you at the outset of “Shine” that it’s him you’re listening to…you know, just like Blizzard Man used to!  Okay…maybe not quite like that.  Quickly into a smooth groove, rhythm & rhyme, the verse of “Shine” rolls by with ease like a low-rider and struts like a pimp through your speakers.  If he’s looking for that spotlight to “Shine” in, he’s chosen a solid cut to bring out some of his best lines on the record so far on this tune.  The opening verse of “Shine” is a serious highlight…the next is just as high-caliber, N0va puts style into the words on this cut and the chorus has wicked hooks and big-big-bass to dig right into.  Those meaty bass-tones draw themselves out long on the bars of “The Chase (We Nah Easy Remix)” to follow right after, one of my favorite cuts on the record bar-none.  Produced immaculately…”The Chase (We Nah Easy Remix) has just enough of that old-school record sound in the atmosphere and slight distortion or bending to its main-melody line that it demands to be listened to closely like you’re going in for a hearing test.  Brilliant texture on this track and N0va delivers more confidently than ever, never letting up for a solitary second as he consistently flows with flawless quality throughout the verses of “The Chase (We Nah Easy Remix).”  Highly enjoyable from its loose chorus & free-styled vocalizations…overall, it’s got a wickedly defined vibe to it and some real perfection from N0va in the verses here.  He gets downright dirty in some of these lines…bound to make you chuckle or choke on a few moments throughout “The Chase (We Nah Easy Remix)” & I dig that too.

Whip Sessions II keeps its layout interesting to the ears throughout without any real dead-spots to pick-on or pick-apart…”Interlude (Winter Cold)” was one of my favorite cuts on the record for its music & beat…the atmosphere of this entire track is like you walked in on N0va just singing along to himself while like, chillin’ in the house; it’s fun, it’s free…it’s no bullshit…N0va’s not trying to be cool or trying to be anything at all other than what he is here…and it sounds completely rad.  I know interludes, intros & outros can quite often be an afterthought…but this is a track that genuinely stands-up on its own.  Seriously smooth in the music department, tons of fun through the vocals and samples…this “Interlude” serves its purpose incredibly well to provide some additional diversity to the sounds on this record.  There have been many talented producers throughout this record…I think I’ll hand the crown over to Lucid Soundz for this one though…massive depth and skill in this mix that a musician’s ears can appreciate big time.

N0va ups the sincerity and sharpens his romantic-game through the tender tune of “Remember.”  Do emcees take shit for songs like this?  I wonder.  They shouldn’t.  “Remember” was another rad highlight on Whip Sessions II as N0va winds through the gentle nature of the music with some additional lyrical highlights you don’t wanna miss on this one.  Don’t let the easy-going vibe fool you…there’s still a whole bunch of madness happening in the song’s narrative that tells the real story – and some of the ways N0va’s described this personal tale are truly stunning.  Really imaginative descriptions along with a seriously smooth & welcoming sound…you catch every word of this one and the combination of every element together really makes this one hit home on every level.  He makes a great point about memory control overall…and how sometimes we can only wish we could somehow forget some of the wild nights/days we’ve been through and experience.  So before you get ready to rag on the man for goin’ soft on ya…have a listen to those lyrics first and make sure you’ve got the full story – this is classic N0va right here on “Remember” and a great track you’ll find within the confines of this new record.

“Hindsight (Last Dayz Remix)” ends Whip Sessions II on a definitive and conclusive note.  Just as the title potentially promises, N0va reflects on past recordings and personal experience over a jazzed-up groove that puts plenty of punch into the mix, nailing the low-end rhythm as good as it gets.  I felt like N0va really did a great job of putting it out there as real as it gets on this last cut…great lyrics, you can hear the personal connection to the words – and no matter how many times N0va has rhymed about crazy experiences that have gone haywire beforehand, he’s right on-point here with words that are truly as inspiring as they are structured perfectly.  I mean…don’t get me wrong, they might not ALL apply to that theory (See Ending Of Bars…lol), but I think you’ll hear what I mean.  N0va raps about overcoming the struggle, acceptance, adaptation and pushing through to that next-level through perseverance, hard work & determination…you get a lot of insight about how this rapper views life now that he’s much deeper into his career.  With mad rhythm & rhymes – N0va brings it all home solidly with “Hindsight (Last Dayz Remix)” – brilliant final tune to another solid effort from this emcee.

As much as I enjoyed any one element of the imagery N0va presents in the final words you hear throughout the record’s last track – what I really liked was that in reflecting on where he’s at & how far he’s come from his beginning to now, you hear that tale of progression as N0va’s continued on – you leave this record knowing that he’s hitting that creative stride right now that matches his skillset and all pistons are firing full-speed.  What you don’t hear on this final track…is any hint of this guy stopping any time soon…N0va’s here to stay & a hip-hop artist you can always rely on to bring his A-game to the bars.

Find out more about N0va from his official Facebook page:  https://www.facebook.com/ShawnN0va/