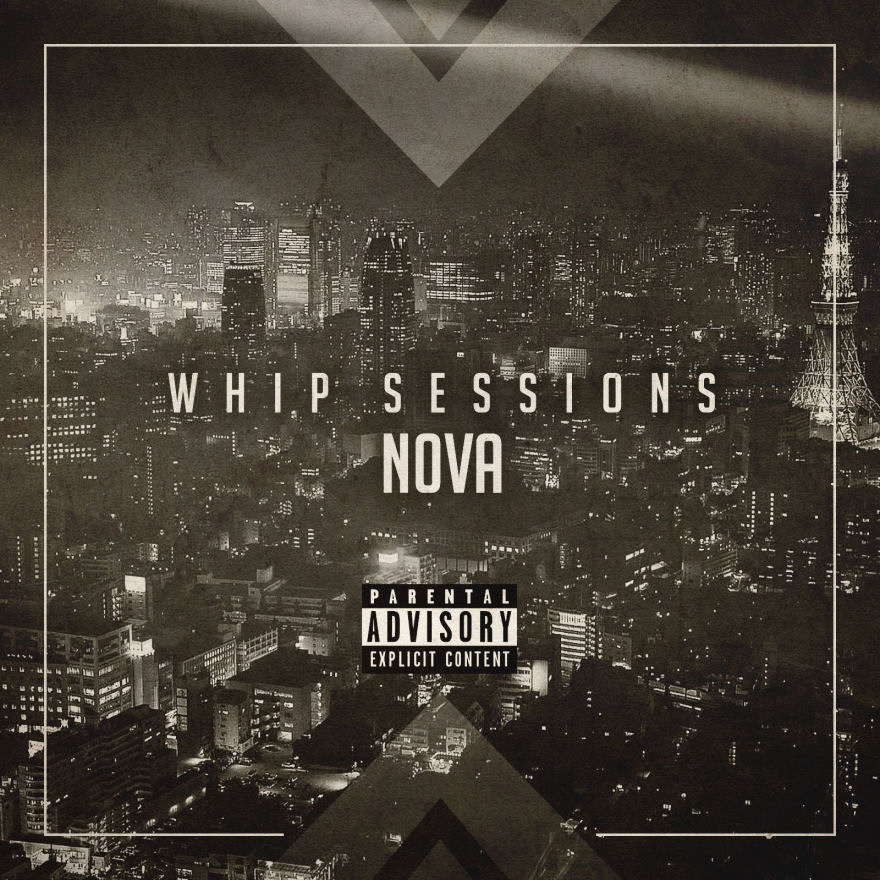 Canadian solo-artist N0va demonstrates the free-spirited attitude the country is famous for on an album filled with good-times from the old-school to the new on his latest album Whip Sessions. I love how some of these tracks take me right back to the days of Biz Markie, Kid N’ Play, Young MC, Digital Underground…the list could go on for sure but you get the idea…back to a time when rap was a little more about the craft itself than it was about beefin.’

Whip Sessions packs a severely DIY sound to the overall album; its slight flaws in production kind of add to the backstory of N0va in a bizarre way…like you can tell this guy is so determined to get these ideas out to make room for new ones. As a result, there’s a little bit of unevenness in the speakers – but nothing so harsh that it’d stop a set of ears from listening to the dynamic rhymes courtesy of this wordsmith from Toronto.

After a blazing intro in the form of “Unsanitary V0cabulary” the style & presence of N0va make themselves known on the microphone right away. With a quickness & cleverness to his rhymes – it’s instantly clear that this is an emcee born to grip the mic and press record; he’s got a lot to say but he raps clearly, precisely and on-point.

Well…ALMOST on-point. Did I hear that correctly? Cause I swear in the following track “Prankster” he mentions something about ‘smoking the finest?’ Ahem. Yo Toronto…I’m living in BC *cough *cough…if you’re smoking the finest over there just know that it more than likely came from us right here on the west coast yo! All bong-battles aside, I dig the playful vibe in this track and the way it all ended up coming together – more wickedly-tricky & complex rap from our main-man N0va on display yet again.

“Mixed Messages” is a perfect example of that song you wish might have come out just slightly better through the actual recording but could never toss based on the way that it came out. This cut reminds me of another modern-day old-school’r…Shwayze. It has that same laid-back vibe to the music that allows you to chill and drift away & just relax and listen to the lyrics and the messages…no matter how ‘mixed’ they might be!

N0va cuts to the chase on “Salamander” proclaiming the rest don’t have ‘a fraction of his passion,’ and when you listen to this intense track, he’ll make you believe it. The way the vocals weave in & out of this early-90’s style early-gangsta-era beat is excellent and that passion he talks about is fully on display as he rips rhyme after rhyme and verse after verse. The addicting vibe continues into the smoothness of “Head In The Cl0uds” as N0va demonstrates all the natural talent he possesses for storytelling with in-depth lyricism well metered to the beat delivering the impact the words deserve.

“0pium Den (Elevated)” would be a hard song NOT to appreciate. His ability to tell tales moves so fluidly it’s like the equivalent of the Birdman movie in audio as it weaves from scene to scene through the imagery he describes. It’d be hard to deny the comparison to none other than Del Tha Funkee Homosapien in his flow, another legendary MC and great company to keep for sure. The road has been well-paved for N0va to exist, and these rhymes of his pay a real homage to the school of old while still remaining relevant for today’s ears.

The only thing that potentially worried me at this point in the album, is that although there’s a tremendous amount of skill in the rhymes and the music is diverse…it’s also the particular style of old-school rap that runs the intense risk of sounding too similar throughout as the metering is always jack-packed from bar to bar with every word that fits. Thankfully, I thought the following two tracks “Gl0betr0tter” and “EleMental” displayed enough diversity to keep me listening intently; there’s not a single word less per bar for the most part, but there’s enough versatility in the music and choruses to keep a person captivated for sure.

He hits a massive stride as Whip Sessions finds its middle on “Mast0d0n;” right about the same time I realized that typing all these 0’s instead of O’s in these titles is severely messing with my brain…

But yeah – “Mast0d0n” really hits the spot with a wicked beat to rhyme over and more incredible lines from N0va – the chorus comes through jazzy and smooth…it’s truly catchy stuff each time he steps up to the mic and I’d say he’s found a real winner on this track.

The middle of Whip Sessions is truly strong with the strong pulse of “Mast0d0n” leading directly into “0ne 0f A Kind” and the extreme good-time vibe and punch this track has. In a sense, as skilled as N0va is and as much as I always want to hear what he has to say clearly…I think in general after thorough listens, I’d actually suggest sinking the vocals back a little further in the overall mix. I don’t think they’d lose any of their punch and I think he certainly rhymes clearly enough that the music would benefit overall with a chance to shine a little more alongside with him, rather than behind him.

“Sc0rpi0n Sting” is an excellent beat and well-put together track…sounds like this one is coming straight off a record as N0va put some sick combinations together like a boxer in the ring with knockout results. Excellent horn sample on this cut that really works well…he’s got a real gift for mixing sound & imagery that really prevails on songs like this and definitely on the emotional sample backing his rhymes on the following cut “Last Day (Y0ung Man’s Era).” I love the enthusiasm that N0va obviously puts into his craft, music & microphone – it really translates well. Thinking about a track like “Last Day (Y0ung Man’s Era),” some of the story is the grim tale of the last days of our planet or perhaps even potential…but the way these messages are delivered, you can’t quite help but be loving the upbeat vibe to it all. N0va can happily deliver me any kind of bad news with his inspired way to communicate and deliver the message.

“Bank 0n The Beat (Kill em S0ftly)” recalls the skill and precision of The Gift Of Gab from Blackalicious. I have a feeling there’s a very good chance that our friend N0va here could probably get through a cover of their “Chemical Calisthenics” without a single element out of place. Rhymes assembled this well completely reflect the work of an artist that puts a significant effort into making their art their career, their every day, their entire LIFE. N0va blazes through verses on “Rat Race” in a real demonstration of this exact point as he describes the everyday life and social-status of our planet’s inner-workings. Getting more intense as the song goes on, N0va comes across strongly on “Rat Race” and you can tell the subject matter of social inequality is one he’s clearly passionate about.

Technically ending with “Young And Elite,” this final slow-funk’d track hits the smooth-spot once again as N0va applies his clever rhymes once more before sending us into three bonus tracks that carry the album on, making it all feel much more like a mix-tape direct when “Matter 0f Time (Hunger Cypher)” begins. The atmosphere also shifts…I like the darker element that this track carries with it and it seems to suit the matched aggression in N0va’s voice. That smooth, back-alley, jazz-club vibe stays strong and only gets stronger with the bass-plucked “Whiplash (Belly 0f The Beast R.E.M.I.X.)” putting real punch into the music and mix…this is a track I thought worked extremely well all the way through. The simplified beat allows the vocals to really shine through; but again, it’s truly N0va that supplies the atmosphere overall that makes this fit together so well through both the music & vocals combined.

As he officially ends Whip Sessions with “(Outro) Unsanitary V0cabulary/Nasty N0va” this album really amps up right at the end…taking it to the lyrical quickness of old-school Outkast-territory in this explosive final-cut. Something tells me these three final bonus tracks are a real separate thing all together…there’s a noticeable smoother mix on all three, leading me to believe that N0va has put these out as an effort to separate the past from the present and declare an all-new era for his music in the future to come. Makes me excited, there’s no doubt; N0va’s put a lot of skills on record here through Whip Sessions and I’d expect he’s only going to get bigger, badder & better as he continues on.