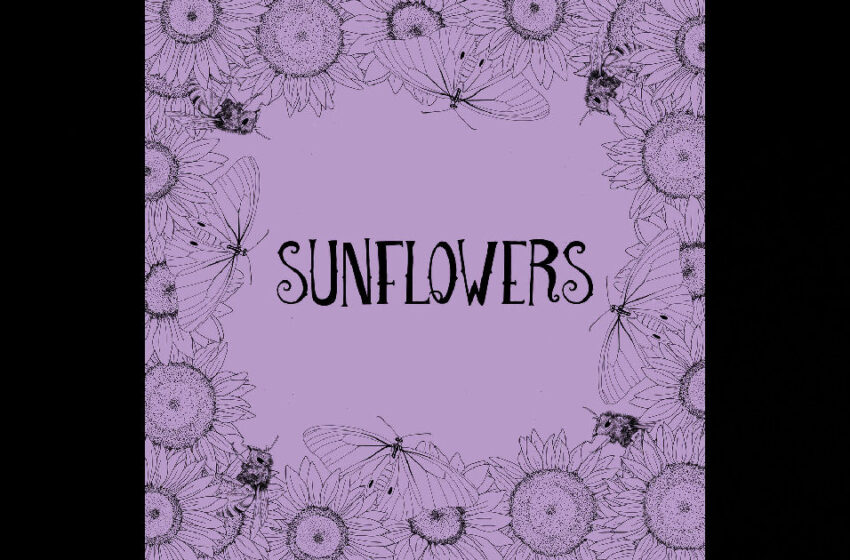 You’ll find a very earthy, organic, and natural vibe flowin’ through this Music With Michele we have here – it’s a cut that all you hippies, philosophers, poets, artists, and creative alike should have no problem finding some avenue into.  The ‘with Michele’ in this particular instance, is Davey, who lays down the fretless bass and acoustic guitar for ya in behind the vocals for ya.  While there are many things you might find to appreciate in this tune for one reason or another, I think what we can all agree on instantly & universally as Davey riffs his way into the bass-lines of “Sunflowers” as the song begins, is that this dude can certainly play that thang y’all!  For real – I’m not even kidding & you can actually SEE the impact he makes visually on your playlist as “Sunflowers” begins – it doesn’t even take the guy a full five seconds to generate incredible interest from the avant-garde opening, and the artistic vibes continue on solidly from there.  Michele’s got great personality, she’s clearly passionate about what she creates, and she belts out her vocals with the confidence you usually find in an artist with about a couple decades of experience under their belt.  From what I can see online, Michele’s been making music for a whole lot less time than that, so in that respect, she’s well ahead of the game already.  Pass or fail, it’s all about making the most of your moment, and our hero Michele here has no issues rising to the occasion to give it everything she can.  Lyrically, she displays many strengths in her own observatory & insightful poetic wisdom – and I like that even though each line plays out like its own separate thought, you can kind of find a way to follow her along from branch to branch as “Sunflowers” continues to bloom and expand.

I mean, if you want my honest opinion on what things sound like, I’d tell ya that it sounds like Kim Deal is now fronting Blind Melon instead of The Breeders…I’m sure many of you from my era would definitely dig on that.  Michele’s proudly “imperfect” – something that you can see at the end of the video for “Sunflowers,” credited to “An Imperfect Production” – but it’s also something you can hear as well.  It’s not something to shy away from folks…don’t be scared – we’re talking about the kind of singer that has the courage to embrace her natural skillset and let her voice ring out into the world, come what may.  Call me crazy, but I always find that completely enticing, and somewhat mesmerizing too at the same time…there’s a really blissful creative freedom that comes with a sound like Michele’s got, and I enjoy that.  Could she be a bit more polished?  Meh…potentially…I guess.  It’s really a double-edged sword and a very fine line to walk…you don’t wanna take out the natural sweetness & endearing indie-charm that Michele has in her voice in exchange for dialing it back through production or effects & whatnot.  For myself personally, Kim Deal is right up there with my favorite voices in Indie/Alt/Rock…so that’s something to consider; I’m not saying Deal’s the world’s greatest singer on a technical level, but she understood how to fit the vibe of The Breeders in a variety of styles, and the same can be said of how Michele fits into this one – it’s that perfectly imperfect kind of tune that carries no pretense & sparkles with unique authenticity.

If I was to have any advice for this Music With Michele project going forward, it would likely revolve around givin’ us some of that good stuff she’s saved for the finale of “Sunflowers” a bit earlier – and I suspect she knows why that is already.  You’ve got your hooks from the instrumentation instantly revealed, you’ve got Michele’s vocals beaming out hooks of her own shortly afterwards – and these are both strong elements of “Sunflowers” that’ll get you plenty interested, yes – BUT…I think if I’m being real with Michele here, what we find towards the end is that much more enticing through the addition of the harmonies.  Smartly designed in many ways too, don’t get me wrong – it’s really never a bad move to use the art of the reveal when it comes to making music or writing songs…all I’m advocating for, is the recognition of a song’s most ultimate hooks, and not shying away from giving us a bit more of that when/if it’s called for.  I like the quaint, humble, and organic sound of this tune…don’t get it twisted – but listen to how it expands and “Sunflowers” blossoms, nearly right before it’s all finished!  Michele!  C’mon now m’lady…you can hear the gold happening there every bit as much as the rest of us can – so mine it all out!  I’m saying I think there’s room for more of that earlier on in the song…and potentially an even bigger variation of this tune to be had, while still retaining the real essence of what we love about its intimate charm.  As it stands now…I think there’s a ton of inherent sweetness & artistic vibes flowing through the heart of “Sunflowers” that’ll connect with many of you out there; Music With Michele has a genuinely spirited energy, warm & inviting sound, and poetic perspective in her songwriting – hopefully she can keep these collaborations with Davey going too, they have solid chemistry shared between’em.

Bonus points for the fact that “Sunflowers” was “written to freely send moral support and good vibes to the Ukrainian innocents” – like I was tellin’ ya, Michele’s got a good heart, a positive mindset, and she’s got a catchy single designed with altruistic intentions to be admired – we should all have time for that & space on our playlists for artists like this that truly want to give something back to the world they love.

Find out more about Music With Michele at this magical multi-link:  https://linktr.ee/Musicwithmichele