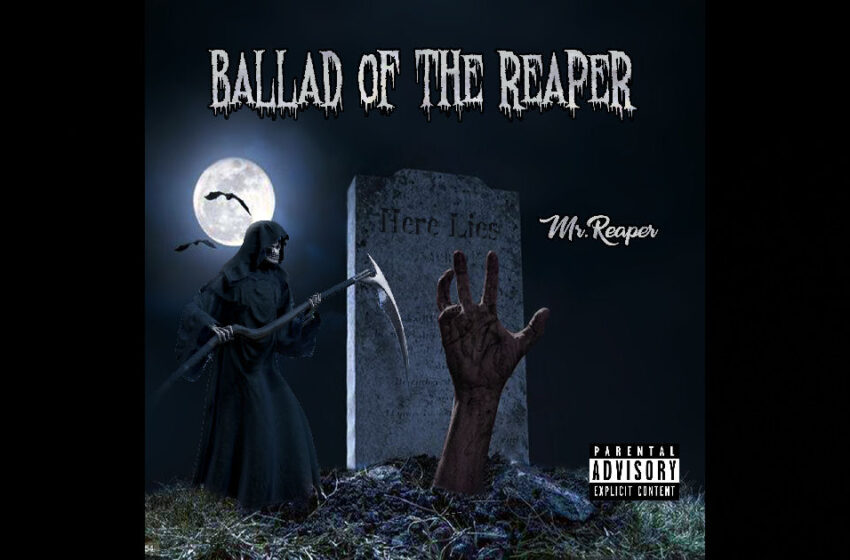 Like I was mentioning just this past week, it’s been an outstanding week/month/year for Rap/Hip-Hip in independent scene right now.  Already in November we’ve had exceptional new cuts come out from Conscience Rhyme & Ahmen – and now we’ve got Mr.Reaper back in the mix, all inside the first week of the month?  Not sure how much space we’ve got left on the calendar for all this audible awesomeness.

If you read my previous review on Mr.Reaper from back in September earlier this year when I was checking out his track “Come Follow Me And We Ride,” you know I had great things to say about what the man creates.  The dude knows his way around rhythm and hooks, and that certainly continues to be the case with “Ballad Of The Reaper” here.  When that red light comes on in the studio and it’s time to record, Mr.Reaper comes freakishly prepared, ready to let his rhymes rip from 0-60 straight off the line.  “My mind is right, the time is right,” as he’ll tell ya himself on this new single – he’s got a solid grip on what he’s looking to create, he’s confident, and he’s got the skills required to make that happen, 100%.

Ultimately, I’m pretty happy with this second cut I’m hearing from Mr.Reaper, and he should be too.  It’s a cut that’s focused largely on speed & rhythm, precision & pace and all that good stuff…content-wise, it’s pretty close behind, but I’d say more of a secondary element compared to the rest I’ve cited.  “Ballad Of The Reaper” is more of a display of what he can do & how he can do it than it is anything else; it’s still a track that proves he’s got something to say, don’t get me wrong – I’m just saying that it’s not as much of the priority as the stylistic vibes & speed are this time around, that’s all.  At the core of its message, it’s a track built on broadcasting who Mr.Reaper is, what he’s about, and the legacy that he’s building – and while that’s not unfamiliar terrain in Rap/Hip-Hop, he makes his case a strong one without a doubt.

Confidence is key…personality is essential…skills are crucial…Mr.Reaper checks all these boxes for sure, and that will continue to lead the way for his future to follow.  At a short 2:20, it’s clear that “Ballad Of The Reaper” rips by QUICK as the man blazes his bars…and in my personal opinion, I think he’s still got some room to expand what he’s doing a bit more in that regard.  Not every track has to follow the same blueprint of course, and not every track we’re ever gonna make is going to do the same things or achieve the same results necessarily.  All I can do is compare artists/bands to what they’ve already revealed to us…and I do have to wonder a bit if “Ballad Of The Reaper” is going to end up being as memorable as “Come Follow Me And We Ride” was…I’m not completely sure that it will be if I’m being real with ya.  What I do like is that I feel “Ballad Of The Reaper” serves him in a larger sense…like it was only mere seconds into this track that I was instantly remembering the key elements of confidence, personality, and skills that Mr.Reaper brings to the game that sets him apart from the rest out there.  So while the track itself might not be as memorable as his previous single was for me personally, it still goes a long, long way when it comes to establishing his identity and what we remember about HIM as an artist – you follow me?  He knows his worth – he doesn’t need validation from me or anyone else out there – and as far as the man catching on is concerned, he’s rackin’ up more than a quarter-million hits on every cut he’s putting out there on average at Spotify alone…so clearly, what he’s creating resonates with the people & all of y’all listening.

I’m a big fan of speed & precision in Rap…and clearly Mr.Reaper has no problem with adding both of those things into the music he’s making.  I’d probably be inclined to recommend expanding the songs he’s making and letting the dynamics work their magic a bit more than what happens on the inside of this short 2:20 – but to be fair to him, it also seems like this is among the shortest cuts he’s ever made too.  So I’m sure he understands the benefits of what I’m talking about…I’m just sayin’ keep it in mind homie…it’s not always about what you’re doing on the inside of any given song, it’s about what you’re not as well…sometimes giving the music or beat a chance to work its magic without the competition of vocals can be a really good thing, or switching up the speed to a more variable degree than what we experience on “Ballad Of The Reaper” can be beneficial too.  Dynamics in general, are a good thing to keep focused on at all times really…I suppose that’s what I’m saying – full speed ahead is full speed ahead, and it leaves less room, if any, to establish the kind of dynamics that make music as memorable as it should be.  All that being said, as long as you recognize that, and you’re switching things up from track to track, you’re also on relatively safe ground in that regard…and between “Come Follow Me And We Ride” and “Ballad Of Mr.Reaper,” he’s already shown us plenty of different gears and dynamics.  A moment in time is what it is – this single is still well worth turning UP loud and proud – I’m simply doing my best to advocate on behalf of what makes music memorable, and that’s tough inside of 2:20 in total length…but on that front, if someone can add more into a short timeframe than this dude does, I’d love to hear it.  Mr.Reaper knows how to create maximum entertainment in a minimal space; this proves it.

Find out more about Mr.Reaper from his official website at:  http://reapgotflowz.net