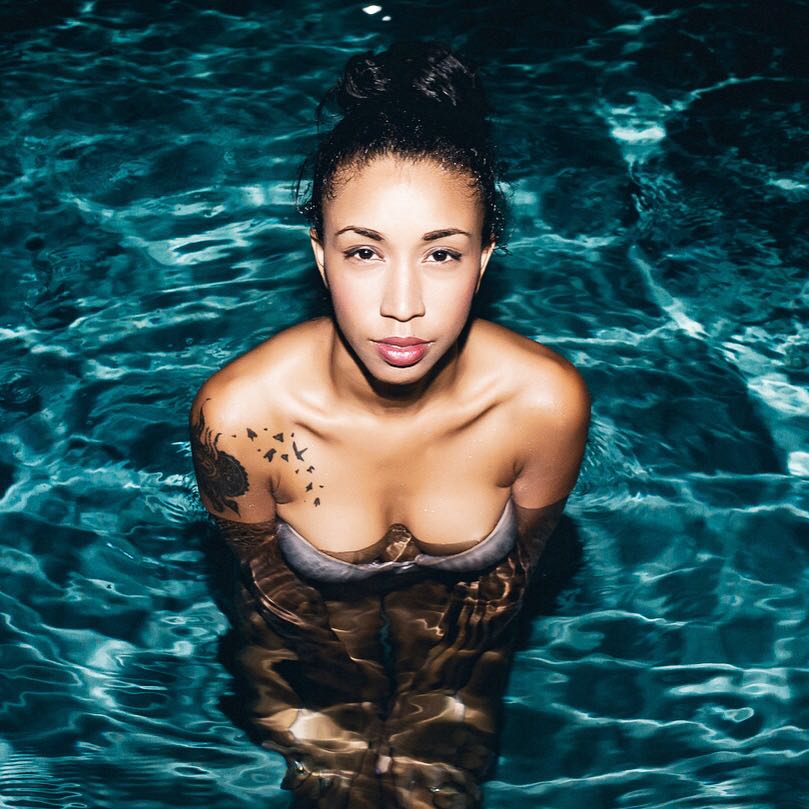 This is bizarre but fun composition to listen to & think about, I’ve gotta say! There is a lot I like about Miss Chay Bella’s new single “I Just Wanna (Parties)” – but I won’t lie to you either, there’s a lot that confused the daylights out of me too! I’m not quite sure if anyone out there in the land of music is hearing this track the same way that I am right now…I could be on my own with this review. But I found that by the end of this song I actually was able to come up with a viable theory as to why Miss Chay Bella might not be able to ‘freak somebody’ – read on!

The single itself starts with a classic-vibe and tight beat that kicks-in early as Miss Chay Bella starts to weave her magic on the mic with a loose-style that matches the groove of the music very well. I’d be interested to hear what else she does…I think the style works well for this particular cut, but I’d want to hear more dynamics if there was to be a full album for sure. The lyrics are spread far apart and give her the ability to hit each of these lines confidently; for the most part Bella does…there are a few spots where you can her the adherence to the style resulted in a little bit of strain on the tone, but nothing that would make the volume drop on this smooth groove.

Now…keep in mind…I’m listening to the ‘clean radio edit’ – which was honestly a little shocking as it was…but I’ll explain in a minute… Right now, what I can tell ya is that our artist in question is rhyming about the party scene, looking right, having fun, getting the freak on…and perhaps a little ‘molly’ in the mix to set it all off just right. The subjects range from good-times to sexier-good times, and again, this atmosphere in the music generally works perfectly to support the chilled-out vibe in the vocal-flow of Miss Chay Bella. She sounds like she’s having a great time recording this song – and that I love.

Sometimes I like to imagine production teams, management and the artist/band taking a knee in a football-esque huddle to go over the ‘play’ for the recording coming up just moments away. You’ve got your manager in the tightness of the inner circle, calling out the play…’drums go here, bass…you start strong, then drop-out and form a buttonhook pattern! Samples…you flank the lefts and the rights…Miss Chay – you’re getting the mic on this play, be ready! Production team – you better be on-point with those faders! Look sharp! Lyrics – keep’em naughty! Ok – let’s GO!

It’s the same concept as ‘looking at a song on paper’ just a lot more dramatic and extremely telling of the fact I really know nothing about football at all. But in the case of writing a song – we all know most often this isn’t the case…we don’t always sit there and examine the ‘what’ of ‘what’ we put into our music – we just do it. So much of music is unplanned and organic…I wouldn’t want it to be any other way; but it’s also because of that natural touch to music that sometimes we throw things into our music that sound great…but don’t always make a whole lot of sense…

Which brings us back around to the artist in question today – Miss Chay Bella…who wants to know, and repeatedly asks while amidst the party-atmosphere in the music and lyrics of “I Just Wanna (Parties),” ‘why can’t I freak somebody?’ And I have a theory as to why she might be having some trouble in that department…

It’s not the looks-department, that’s for sure. A quick look into the social-media of Miss Chay Bella will show you she’s every bit the ‘fine lil’ shorty’ she claims to be at the beginning of this new-single – she’s a beautiful lady, no doubt. So no…it’s nothing like that…the theory has to do with an added sample into the mix throughout “I Just Wanna (Parties).”

You see…when it comes to the party-scene…or at least from my old-ass perspective…the KIDS gotta be left at home, no matter how cute they are. So unless I’m missing the point and the ‘parties’ that Miss Chay Bella are mom-gatherings…I think those kid-sounds/samples are somewhat out of place on a song like this. There are times where contrast makes sense to me, but I’m not so sure I can make sense of the young-kid samples in amongst this club beat and buried into the clean-but-still-fairly-explicit lyricism.

Why can’t Miss Chay Bella freak somebody?   Because it sounds like she’s dragging her KID into the party-scene! Ain’t nobody got time for that – that situation is bound to make it tougher to get one’s freak on.

I’m lightly teasing her – but the inclusion of that sample is something to think about, and made this song even more interesting for me when I was listening to tell the truth. I’d be the last to say it doesn’t sound good – I think it does personally; but all the way throughout my repeated listens I found myself questioning the cohesiveness of the track by the decision to include that in there. I don’t know if anyone else out there would even notice the contrast, or think about the sample in any other way that it just ‘sounds good’ alongside the rest of the mix…I don’t think it’s anything Miss Chay Bella needs to worry about this time around either with the groove in “I Just Wanna (Parties)” being as subtle, smooth and strong as it is – but it might be something she wants to huddle-up, discuss and consider in the future recordings!

Find out more about Miss Chay Bella from her page at Facebook: https://www.facebook.com/misschaybella