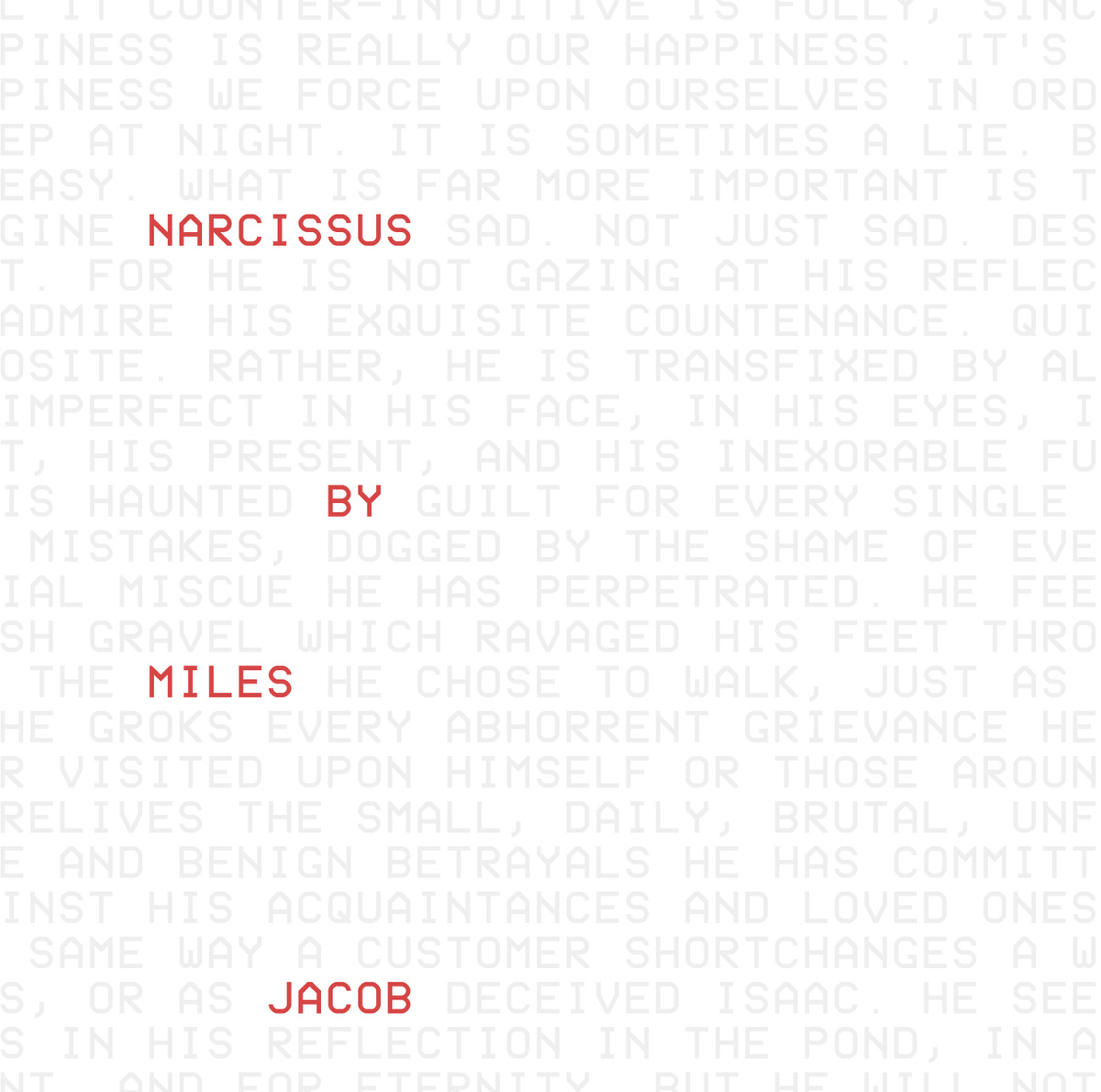 This album makes for one incredibly in-depth and flat-out awesome listening experience. As I picked up on the influences that have impacted Miles Jacob over his time as a musician, I couldn’t say them any better than he has actually listed himself on his social-media pages. Key giants of innovation, song-writing and creativity like Jeff Buckley, Radiohead and the White Stripes.

Okay…whatever…so I would have just plainly said Jack White…I would have been close. You can certainly hear the impact that these sounds have made on Miles as he combines them in new, experimentally-controlled and exciting new ways. Seriously dear readers…we’ve got another potential genius on our hands here today…

The comparisons come through in an honest enough fashion; that is to say, you’ll hear the influence on Jacob, but you won’t feel remotely like he’s ripping anything more than a few tones off at best – and a few tones borrowed do not alone a song make. As the beginning ride of this album, “For Better Or Worse” comes out with strong pulsing energy and a completely rock-infused vibe; this is not only comparable to what Jack White might create, but it’s flat-out just as innovative and just as genius. The verse is delivered with a ferocity that can’t be ignored as it switches in between melodic and pure-rock bliss. Guitars are inventive; the accenting instrumentation creates an incredible atmosphere of strings and swirling music all weaving in & out of itself. And I’m not calling him out here on his recreational habits and how they might coincide with his music…but I AM saying light yourself a happy-smoke around say….ummmm….four minutes and twenty seconds into this track exactly….you’ll thank Miles for doing what he does in bringing this incredible track right to the rafters, and you’ll thank me for making sure you were ready & prepared. If Jacob is going to light-up the track like that, I figure it’s only fair if you light-up as you listen.

The emotionally-downtrodden “Born To Be Broken,” is a great innocent rock melody at a beautiful level of refined-meets-unrestrained sound. Here is a track that you can definitely hear an audible comparison to Thom Yorke and the way he chooses to sing songs with a wild & reckless abandon, landing on melodic tones none of us even knew existed yet. Miles Jacob is doing something very similar here…you might almost find the melody contrasts a little too much with the overall craziness of the tune itself, but I guarantee it’s the kind of melody that will last and stay with you. And to be completely fair ANYHOW…any comparisons to Yorke would more than likely be brought up in conversations about Pablo Honey or The Bends…the wildness you’ll hear in Jacob is the same wildness that Yorke traded in for mildness. I still love the guy and pretty much anything Radiohead does – but hearing Miles hit these notes and tones as committed and strong as he does is making me miss the Yorke of old, but also fantastically appreciating that I have Jacob to carry on that brilliance.

“Brutal Honesty” is a marvellous construction – I promise you won’t hear another song like this any time this year…and I’m telling you directly that you’re completely missing out if you don’t check this particular cut out. Narcissus as an album has been massively impressive up to this point already, but the genius displayed on “Brutal Honesty” is just on another level entirely. Big drum sounds, gorgeously-performed vocal melodies and small & tiny electro-sounds that just fit immaculately. It’s like one part Cake, one part Radiohead and one part broken-answering-machine-that-randomly-seems-to-start-up-at-the-perfect-time-ALWAYS.

Hmmm. Let me stand up here and stand back from my computer to read that over…is that what I mean?

Hell yes. Nailed it. Alright…moving on…

This guy is kicking pretty much ALL the ass available on “Less Than Gold.” Miles has perfected the art of flipping in between falsetto and his regular singing voice; from light-melodies to a raging rock-growl – he’s seriously just KILLING it here on “Less Than Gold.” The performance is breathtaking – you can tell that this is a guy that goes into the studio with a determined attitude and comes out beaming brightly knowing that there wasn’t another ounce of himself he could have recorded.

Microphones be all like, ‘dude – why you YELLIN at us?’

‘Cause when Miles Jacob raises his voice, it’s because the music and mayhem have come up right beside him. This guy has a relationship to instruments and song-writing in general that most people wouldn’t be able to grasp and others would KILL to have; he executes his visions with flawless flaws inserted just as perfectly as any strong tone or note that comes through. Listen to the uniqueness and creativity of “Corner” as Jacob wanders around a virtual universe with his vocals and takes his tonsils for a walk. It’s pretty, it’s thrashing, it’s delicate, it’s cutting…it’s a fifth complete victory so far on this album of nine songs. Finishing strongly with excellent drums from Jacob Schreiber and a wonderful violin solo from Miles…I’m not only wondering where else he might go on Narcissus, but I totally want to go with him. This album…no bullshit…is completely captivating.

As it rages into “One Room Mansion,” I think I just heard Jack White wash the sauce off his chin…

Honestly…comparisons made or not made – if you like this sound, you HAVE to like what Jacob is pulling off here. This song has the inner-engine of a track as impactful as “Lazeretto” and performed with every bit the confidence and candor that you could ever hope to hear from an artist. Miles Jacob, to say the very least, will absolutely GO for it every single chance he can…and when he does, believe me – you’ll hear it.

There have been so many memorable moments on this album that it would take twenty pages easily to list them all. The way that Jacob weaves the vocal flow of “Phoenix King” through the electro-grinding around the two minute mark is just otherworldly and entirely awesome; the way it fades & gives way for a wicked guitar solo from the album’s producer/mixer/performer Manuel Gagneux is nothing short of brilliant. Production should certainly be mentioned – it’s outstanding and the following cut “This Time” proves it beyond any doubt. The way the low end breaks to just isolated piano and Jacob’s haunting melodies…then adding the beat back slowly…good GOD this album has EVERYTHING I NEED. From two-minutes-thirty and forward the track rages into audible emotional chaos and you can hear Jacob putting every ounce of conviction and passion into his performance once again. Love this beat…amazing, amazing tune.

To wrap it up, Miles Jacob and his cohorts start off completely softly on the final track “Balloon.” As pleasant & sweet as this sound becomes…I can’t help but feel it’s been plenty-demonstrated on this album that this song is going to take us on an extreme adventure. While he sings about ‘cat-food, hair & shit,’ I don’t think I can recall words ever sounding so beautiful. Towards the two-minute mark “Balloon” begins to fill with sound…and I’m ready for this track to begin to take off without regard for coming back down. The subtle delicacy continues and we’re in a beautiful tender moment with Miles Jacob that lasts like the date you hope will never end. There’s a loose-feeling beauty to this song…much like you’d recognize from the way Radiohead’s “Motion Picture Soundtrack” found its way into your heart & mind. With less than a minute-and-a-half to go…”Balloon” spreads out into distant, fleeting fog-like music that encapsulates your imagination and ends this album in a subdued & subtly-intense melodic fashion.

I honestly can’t believe just how much I’ve enjoyed listening to Miles Jacob; I had no reason to doubt him of course…but you never truly expect to run into a musical visionary of this magnitude still uncovered in the independent music-scene. He’s a rare gem, and there’s all kinds of courageousness, versatility and leadership demonstrated here on Narcissus…but more importantly, there’s true heart and true passion for the craft on vibrant display here from every possible angle.

Find out more from his official page: http://www.milesjacobmusic.com/ and support him at Facebook here: https://www.facebook.com/milesjacobmusic