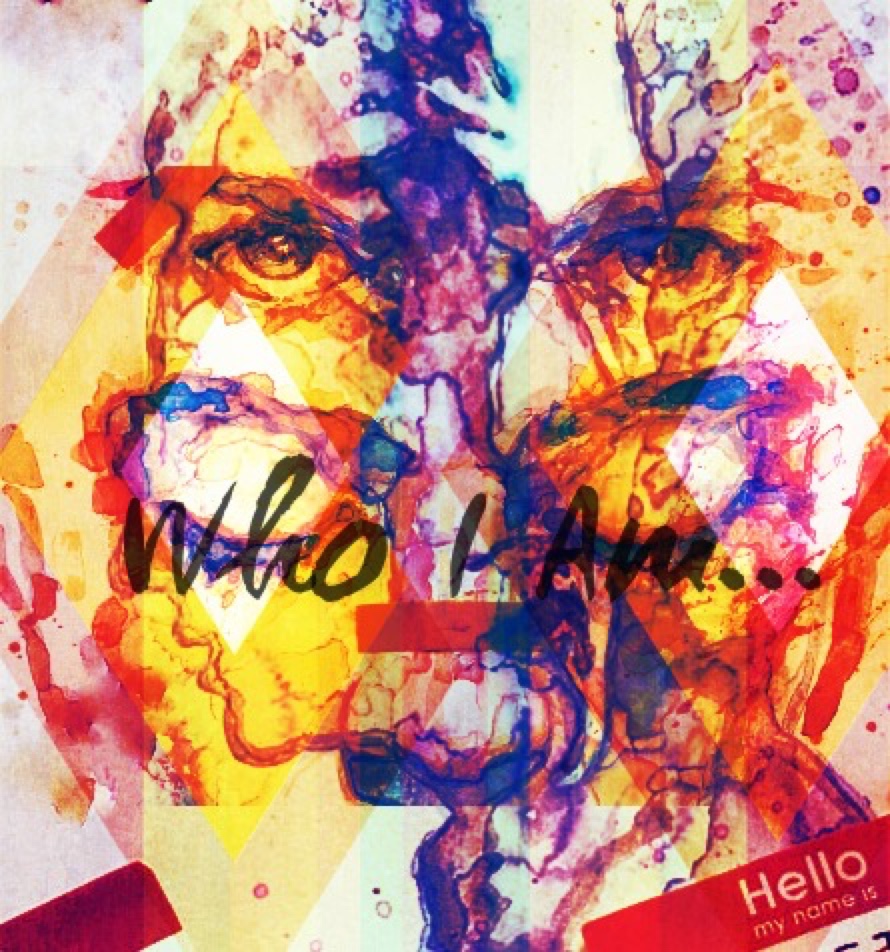 There are audibly about a million-ways to create a first impression and establish that memorable impact right away…and Mike Tro has found yet another one with a twisted opening to his new album Who I Am…(Hello My Name Is) with a blown-out, off-kilter beat that had me spending half the song checking all my audio-connections just to make sure it wasn’t on this side. What Mike Tro and many others never consider when making the music they make is just how long us writers tend to stay awake for…it’s hard for us to figure out if we’re dreaming lucidly of if we’re actually awake & fully-aware! “Don’t Fall” will always be a memorable-cut for me…I had no clue what was going on throughout this opening…I dig the beat and the jazzy-melody…but the chosen style to record it in threw me right off completely.

I was ready for the rest to follow-suit and be able to adjust my point of view to allow for the DIY process of production to roll-on…and I still suspect that it IS DIY…but the production-values all become 100% more clear instantly with “Transform In The Moonlight,” making the choices on “Don’t Fall” inarguably purposeful. Confusing, yes…but purposeful. As Mike transforms to a low-end environment with more clarity, “Transform In The Moonlight” already finds itself more accessible by the nature of the recording. Throughout his opening tunes “Don’t Fall,” “Transform In The Moonlight” and “Hungry Like Wolves,” Mike & his vocals spit a verbal-barrage of wordage into the microphone…the flows are similar in their energy and by the time that “Hungry Like Wolves” is complete, you’re looking for the next sound to come along on Who I Am…(Hello My Name Is) to innovate the overall atmosphere a little.

And as “Talk Show Outerspace” came along…that creative-muscle began to flex a little more. Musically I thought this was an extremely awesome beat…it’s very, very well put together and shines bright throughout the near four-minutes. Vocally, there’s a lighter-tone to the sound of the vocals themselves and it works to break up the sound on the album just enough. “Talk Show Outerspace” made me start to wonder about what Mike Tro might actually consider himself to be however; the rapped-out verse of this song and the rest that preceded it have all been racing around like a car in a mud-pit…so is he a rapper? Hip-hop artist? Poet? Spoken-word artist? Take your pick…you could make an argument for any of those aspects of the genre within what Mike is doing – especially on “Space Girls.” Man…he got this tune righter-than-right…”Space Girls” has an otherworldly beat & vibe to it… Quite different from the rest of what’s been on Who I Am…(Hello My Name Is) so far and displaying a range of vocals from fast & slow to low & high – Mike combines all the gears into one flawless-machine for his inspired performance on “Space Girls.”

A cut like “Confession” with its forlorn & melancholy atmosphere would make you lean closer to the poet/artist end of Tro’s spectrum. It’s like a 2-for-1 special…the first half of the song is theatrical, sad-but-sweet in its sound – and after a short break in the music, Tro bumps-up the low-end menace on the studio-dial to bring in a solid-switch to the music and mix it all together smartly at the end. When it comes to the music, it always seems to make sense to get low-end heavy with Mike on Who I Am…(Hello My Name Is) as much of the vocals have an intense low-end filter to them as well. So in a track like “Unforgettable” it makes cohesive-sense in the sounds…but almost maybe a little too similar in some spots here and around the album – but it all depends on what he’s truly going for. If he’s looking for us to catch every word at the evenly-paced and understandable-tempo they’re at…he’s still missing it by a little with those low-end filters as they often layer-up and swell and blend the rhyme together in a bit of a mash-up; but if Mike is more after filling in the rhythm through the vocal-delivery – which I think he is – then completely clarity on every word doesn’t become the most important aspect.

I think a track like “Heart Of Darkness” takes a little of the vibe that we got from the opening-cut “Don’t Fall” and improves on the method. The beat & melody still have that distorted, off-kilter sound to it, but it’s all mixed-in a whole lot better here and this time around succeeds in its mission of sounding audibly fantastic. So much so that I almost didn’t accept the way this song switched in its middle the first couple times around…I wanted more of the opening melody! Tro lays into the microphone with his signature sound on “Heart Of Darkness” before putting on a clear demonstration of high-tempo verbal-skills on the following beat, “Feel Better.” After this smooth-ass cut, I’ll admit…I DID “Feel Better.” And it made me feel a whole lot better about Mike Tro in general…I think up until this point on the album that second-gear was somewhat in question…we’d heard him in gear-one throughout 99% of what’s happened so far on Who I Am…(Hello My Name Is) – and even though the music becomes possibly softer than ever before, Mike himself is massively amped-up in his performance. Delivering word-after-word at rapid-fire like he’s flipping through the dictionary trying to record each one – “Feel Better” solves that last piece of the Tro puzzle and highlights the fact that he’s more than a capable emcee at any tempo.

So when he heads back to his more recognizable sound & style on the following tune, “Intimate Electricity,” we’ve gotta realize that for the most part, this is the exact idea, sound and texture to his sound that Tro is looking for and identifies with as a performer & as a listener himself. Being extremely stylistic and not what ears typically expect has a way of putting artists like Mike in a niche-class of specific-sounds that people either love and latch onto or don’t get at all…so there’s a risk here on Who I Am…(Hello My Name Is) – but I’m positive he’d know that going into this.

Hey…wait a minute…did he really just say “My penis is a portrait?” That’s brilliant!  But also, damn!  My penis looks like a blurry-polaroid from 1974.  🙁

Sorry…side-tracked for a moment there in “Intimate Electricity” – what can I say, some words stand-out amongst the rest!

What I want a WHOLE LOT MORE OF from Mike is what he’s doing on “The Accident.” This beat livens-up the end-run of songs as Who I Am…(Hello My Name Is) begins to close with a solid mix of bright-sounds & a low-end beat accompanying a sincere & genuine delivery from Mike on the mic that sounds about 1000% more personal than any of the songs we’ve heard so far. For the most part…I’d say he’s quite the storyteller and wordsmith; all displayed throughout the verbal-olympics of the songs preceding…but on “The Accident” that storyteller-aspect seems to fade away…and the ‘entertainer’ seems to have disappeared to take a moment to become fully-real with us all. Don’t get me wrong…”The Accident” is one of THE most entertaining songs despite its shortened-length – but there’s less of an effort to play the role here and more of a sincere, raw & emotional-output from Mike Tro in his words.

If anything…as much as I like the final-cut “Gold,” I might’ve actually switched that one and “The Accident” around to leave it on that serious final-note…but that’s me…I get why “Gold” comes back in to brighten it up a little at the album’s very-end to leave you smiling…I get it. And I think Mike succeeds once again here at the end with “Gold” – it’s another diverse-cut from the album overall; a lot of the second-half of Who I Am…(Hello My Name Is) goes on to really bring around those changes in tone, atmosphere & direction.

So yeah…when I look at it and how it plays through, I’d have to say the album inarguably progresses and gets better from beginning to end. I think Mike has to be careful about making sure to switch up the dynamics and mix of the low-end vocals meeting the low-end beats for a low-low-low mix & sound overall. He’s done more than enough to prove that he’s capable of much more than just one dimension here on Who I Am…(Hello My Name Is) and certainly proven himself as an extraordinary wordsmith; the kind of man you can count on to create verbal-crosswords with his lyrics laid out with audible-precision.

Have a listen to the Who I Am…(Hello My Name Is) mixtape at datpiff here: http://www.datpiff.com/Mike-Tro-Who-I-Amhello-My-Name-Is-mixtape.741400.html

Tags: Album Mike Tro sleepingbagstudios Who I Am...(Hello My Name Is)