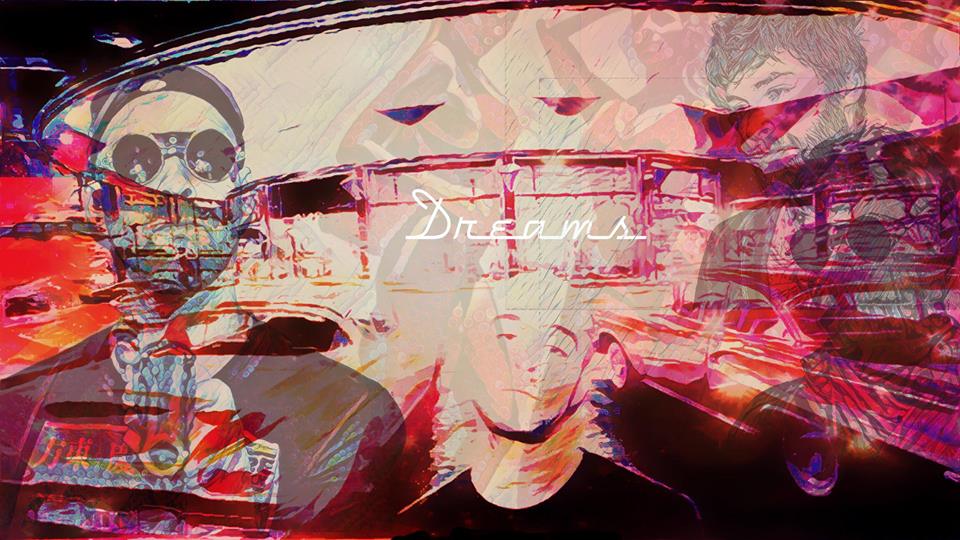 Been a minute or two since we heard from mic-maestro Mike Tro…looks like around the end of the year in 2015 when we checked out his record Who I Am…(Hello My Name Is).  If you click that link there and check out the ol’ archives and read that review, you’ll see I was plenty excited about the music this emcee came up with – and I’m still just as stoked on it today as I was then.  I’ve been checking out his new record Dreams…his sixth record in fact, just released at the beginning of the month…and even though I’m just commenting on the opening cuts of the record today, to state FOR the record as well, I’ve heard the whole thang and this guy has definitely hit the mark once again.  Throughout the entire record, you’ll hear tons of unique, innovative, wildly creative and entirely well-crafted ideas, beats & rhymes – Mike Tro is audibly incapable of doing anything less than completely entertaining you.  The record is as diverse & versatile as you’d expect from this emcee…and as you’d also expect, his attitude, character and personality are right in the center of the spotlight and at the heart of these tracks; dude crosses the line with what he says constantly but always stays right in line for quality in his writing and focus in his delivery.  Dreams is a wickedly entertaining record with numerous highlights I could go on & on about…I’ll do my best to restrain myself for now and just let you in on what’s up with the first four cuts off the new Mike Tro record…place your bets now & let’s see if I can pull that off…

He opens it up with the smoothest bass-line groove on earth to bust his rhymes to on “Days Will Get Better (Intro)” – musically, this cut instantly hooks you in long before he even hits the mic!  That being said, when Tro does his thing, the level of everything in the entire song heads straight-up – he’s a seriously entertaining emcee that has a firm & confident grip on the mic; he knows his material inside & out, he’s prepared and ready to make the most of every syllable spit out in the studio.  It’s warm, welcoming and inviting…a real introduction to a record that properly introduces the skills, the talent and the man himself.  It all sounds perfectly comfortable…for fans of real Hip-Hop, “Days Will Get Better (Intro)” will pull you in immediately as it puts its hooks out in equally strong doses between the beats & vocals…so damn smooth…seriously…it’s a brilliant track to bring people into this new record of his.

Taking the album into a beautified atmosphere on “Morning” – Tro twists the record into an entirely pleasant state of mind through the gentle beat & music on this second cut…and lyrically, he covers the map pretty significantly in this one from personal insights to social commentary.  If I’m being entirely honest with this homie…I think he’s taking a bit of a chance with this cut being up at the number-two spot on the record – the song & the idea are good…and overall it works, BUT – the offbeat production on this one might throw people off as to what’s to follow.  With the use of distortion in the mix, people are going to have to quickly notice the clarity in the opening sounds & samples to know it’s done on purpose stylistically and not a flaw in production.  With it being the second track, even after hearing the clarity on “Days Will Get Better (Intro),” he runs that risk of making people wonder what the quality will be on the songs to come; conversely, fans of unique production and the real creativity you can add into the craft of Hip-Hop will likely ‘get this’ and the way it’s been put together.  Thematically, there’s no doubt that it fits…and I think between the combination of the melody in the vocals and music together, there’s still no way that anyone would turn this off, I’m just making points to consider.  Again, listen to the surrounding elements like the main vocals in the verse, flute-like music-samples and bass-lines and you’ll hear the clarity in the production is there…Tro knows what he’s doing and I think it leads him to another solidly-realized idea overall on “Morning” and its hazy-swaying vibe in the chorus hook is likely to pull most people in no matter what.

The piano-glitch sample & beat of “Coffee” is right where my ears are at…I love the sound of the music on this cut.  I like it because if you were to hear it on its own, it would sound like it belonged to part of the instrumental electro-section…but decidedly still electro…with Tro’s hook solidly in-check on “Coffee,” the entire song takes on a real jazzy atmosphere that works really well in his favor.  The vocal sample that starts out the song is genius, the entire approach to this track is as professionally laidback and restrained as you’ll ever hear.  As a guy that sits on his ass all day listening to music, believe me, I appreciate a masterful ode to The Bean like this; as far as I can tell, Tro’s speaking direct here…you can take him at his word that this is indeed a song about the love of “Coffee.”  I can get behind that.  I couldn’t get through a single day without about 10 cups by 10 a.m. – what can I say, this track really spoke to me in ways like no other track ever has.  It just says all the things I wish I could have said to “Coffee” myself…he’s put it all so beautifully and so accurately…brings a sweet tear to the eye.  In all seriousness, the loose, chill vibe in the approach to the vocals in the hook and the low-notes of the main rhyme really work well with the music on “Coffee;” another rad cut on the record and yet another dimension of the depths of diverse ideas & sounds from Mike Tro.

Up until “You,” he’s actually been fairly restrained…but Tro’s got the kind of sense of humor and attitude that can’t stay deeply hidden for long; “You” lets the cat out of the bag and gives you a solid dose of the way this guy can so impressively write jokes that you have to take seriously.  The skill-level in his rhymes, cadence and flow are some of the best I’ve heard from Tro…the lyricism of this cut is so entirely off-the-charts good I can barely begin to explain.  When you listen to the construction of some of these lines and the intense way he rhymes them together, you’ll notice the genius-level this guy’s working on…regardless of what you think of the actual subject of the song itself.  Yeah “You” is about BJ’s more or less…that doesn’t mean there still can’t be a truly artistic way to express all that love for the subject does it?  Some of these lines will absolutely blow your…mind.  “You” proves that Tro hasn’t lost his sense of humor in between albums and can absolutely deliver at a professional level, even in the strangest places to find that happening, like on this track.  How he got through this whole cut with a straight-face is completely beyond me…”You” is one of the funniest songs I’ve heard in years when it comes right down to it – but the best part about the song perhaps is that it doesn’t SOUND like a joke because of Tro’s perfection on the mic…it doesn’t ever become hokey, and as a result the humor never wears off & you’ll want to keep listening to this cut over time, it’ll hold up.

Alright…can’t help myself.  The stunning rhythmic pull of the hooks in the vocals and UNREAL music of “Don’t You Know” gets me every time…make sure to listen to that too.  Oh!  And listen to “Not Forgotten” if you want to hear what it sounds like when an emcee really takes the microphone for a stroll – ‘cause that’s a full-on pimp-strut in a song right there is what that is & definitely one of my favorite cuts from the Dreams record.  While you’re there anyway, you should just let the playlist roll into “Gone Away” – I tried to count’em…Mike maybe takes three breaths throughout the entire verse I think?  He rarely comes up for air and sounds seriously impressive rolling through that cut…and again, you were there still listening to “Not Forgotten” only moments before so it’s only natural that you’d still be hanging around listening to “Gone Away” – I applaud your decisions.  It’s because of those great decisions you make that you’re still listening to Dreams when “Stop” comes around, because obviously you didn’t want to miss out on another rad dose of jokes from Tro and one of the jazziest samples in the music he’s used on the album so far; I know, I get it, I hear ya.  And YES…I’m with you on the irony-thing too…like, how could you “Stop” when “Vibes” starts up right after right?  Now THAT’S a comical idea, also see: impossible.  Some of his best lines come out on “Vibes” and the man gets real in the lyrics just as much as he creates eyebrow-raising lines continuously…also another highly unique atmosphere on this album that you had to squeeze in before work, I understand entirely…

I think you get it by now – Tro’s delivered another highly satisfying album when it comes right down to it…but you didn’t hear that from me.  Okay, you kinda did…but shhhhhhh.

Find out more about Mike Tro from the official links below!