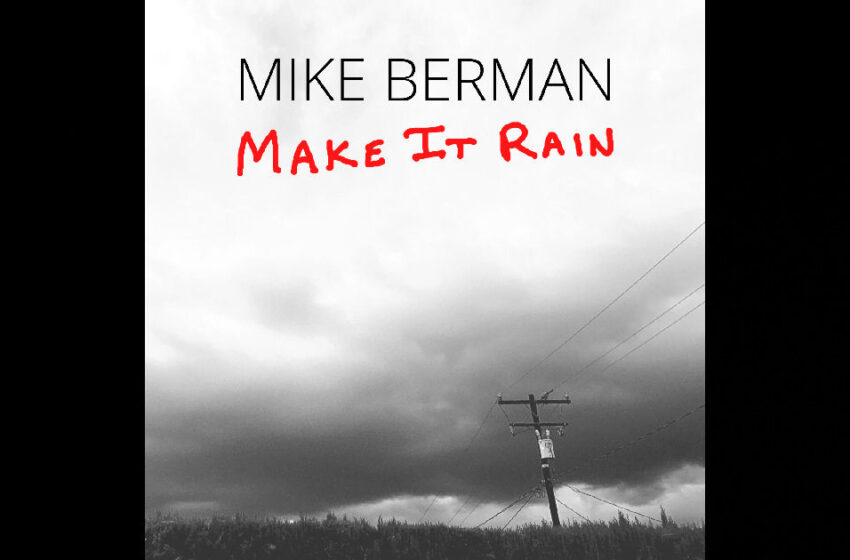 You ever have one of those moments where you’re listening to a song and feel like you could somehow have created a sketch of the artist or band performing it and that they would have looked exactly like you thought they did?  I had that moment here with Mike Berman…what can I say – he looks how he sounds!  I don’t know how to explain that any better than just to write it…I suppose there will be some of you that know what I mean.  It’s not intended to be offensive or disrespectful…quite the opposite in fact…I suppose it’s a credit to the man behind the music at the end of the day; you listen to a song like “Make It Rain” and you feel like you know the kind of good-natured granola dude that probably made it.

Anyhow.  If they held awards for who created the least offensive song in a year, Mike Berman would have been in the running for top honors with “Make It Rain” in 2022.  I’ll put it to ya this way…it’s hard to just take away any points when there’s no fault to be found…Mike’s done a really professional job in the way he’s executed this single, and he should certainly be proud of that.  There’s no stone unturned when it comes to the detail and how each element of this song is presented to us…I feel like the maximum value of “Make It Rain” has been achieved, and that’s a good thing of course.  I’m not gonna be the guy that tells you that you’ve never heard a song like “Make It Rain” before – you have, and quite likely, plenty of’em…and I suppose that’s the downside to a degree.  On the one hand, there’s a reason we’ve heard so many gentle acoustic-based jams & love-songs in our life…they’re essentially timeless.  That being said, it’s because of that, that we’ve also heard scores of them throughout music’s history.  I don’t need to tell Mike he’s not really doing a whole lot differently than the many that have come before him…I have the feeling he already knows this, and is at peace with it.  Some of us come in trying to change the game – and some folks like Mike, exist more to preserve it and/or help highlight the roots of what’s made music essential to our lives from its earliest moments.  You can find tunes like “Make It Rain” that would trace right back to the first strums of the acoustic guitar…but that also helps give this song a classic spin to its sound as well that’s admittedly, kind of endearing really.  I’ll tell ya this much for certain folks – you don’t write a song like “Make It Rain” without living a pretty darn decent life.  When you eventually see that picture for yourself & you get a look at the man behind the music, you’ll realize I wasn’t kidding when I say that he looks like he sounds…but you’ll also know from his smile that he’s clearly been leading a life worth living, full of kindness, love, and an enduring joy that he most likely carries at all times.  Mike’s got that twinkle in his eye that tells ya he’s seen the secrets to happiness.

Really all Berman’s going to have to battle against is whether or not there’s enough identity in the sound itself.  Despite any of us feeling like we can picture the guy that’s singing a song like this, having a reason to remember the name is an entirely different thing, and just because a tune can turn out to be flawless doesn’t imply that’s how you get to that point of being memorable in music.  I don’t think anyone out there will really take any issues with a track like “Make It Rain” – it’s descriptive, lyrically vivid, and has quite the comforting sound at the heart of it all…people don’t really tend to turn songs like this off, but it’s harder to argue that they’re racing to seek them out too.  So you end up in this strange limbo, where no one really has any reason to complain about anything or object to any element of the song from the music to the microphone, yet no one’s really goin’ stark raving mad for that next spin either.  If “Make It Rain” came on again, you’d be happy to listen…but you’re probably not turning your playlist of unknown songs upside down clicking every track to figure out where that “Make It Rain” song went.  Which I’d fully acknowledge…makes this kind of a weird world we’re living in.  I listen to the professionalism that Mike’s put into this single, and it instantly makes me wonder about how much effort is put in versus how much reward comes out.  That being said, you know for a guy like Mike that it’s never been about fame and fortune, so much as keeping you engaged and entertained whenever he’s had the opportunity to.  So in that respect, mission accomplished my good man…I don’t think anyone’s going to object to “Make It Rain” being on their playlists…now it’s just a matter of convincing the folks to add it on.  That’s the hard part of the sell…pleasant & sweet have become a much tougher thing to sell to the masses in terms of what they’ll exchange their time for.  But hey…the musicianship is solid, Mike’s got admirably natural vocals, and this song itself has remarkable harmonies in the main hooks that should be worth the price of admission for just about anyone out there listening.  T’ain’t a bad tune at all…but definitely the kind of single that could struggle to make the impact and impression you truly want a single to have.

Not everything in life needs to be so edgy and abrasive all the time – chill out with Mike, you’ll enjoy it.

Find out more about Mike Berman at his official site at:  https://mikebermanmusic.com