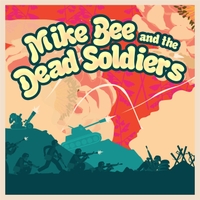 Here’s a project I’m proud to have been supporting and listening to for some time now – Mike Bee And The Dead Soldiers.  Behind the scenes, we’ve worked together on different concepts to bring the music to life onscreen through videos – something I’ve definitely felt privileged to have been a part of personally…very artistic, very unique music in this band that makes for a perfect canvas for the imagination to work with.  While Mike Bee And The Dead Soldiers might not make what would typically be found in the mainstream, creative music like this takes on entirely new lives and thrives in the welcoming-arms and ears of the independent scene.  The sounds & styles that Mike Bee And The Dead Soldiers create are perfect to listen to when you really want something different from everything else; they are truly different – no matter what time period of music you examine.

For instance…the opening tune “Despise The Lie” is the kind of song you don’t really see coming.  At first…to be truthful, I wasn’t quite sure it worked until days and days and days later I still had every piece of this melody in my head.  I think a lot of what Mike Bee And The Dead Soldiers create could potentially suit and strengthen many moments onscreen through soundtrack work – and I think defined, unique atmospheres like what you hear on “Despise The Lie” is a great example of why.  The shuffling beat is quite an inviting way to start-up the EP – but I found what I really liked about “Despise The Lie” was the shroud of enveloping mystery that clouds the atmosphere and mood of this song.  Love the tone of the organ sounds that they’ve used and can’t possibly argue that the hooks aren’t strong – this song gets stuck in your head so strongly it takes up a permanent residence there.

I have a particular affinity for “Won’t Walk Away” – of all the tunes I’ve heard from this project, I still feel like this is my absolute favorite.  Not only do I think the song turned out extraordinarily well with its complex & bright orchestral-ideas – but this was about the most fun I’ve had putting a video together in a long time.  “Won’t Walk Away” progresses to become something more like a psychedelic trip through combining subtle guitar with the orchestral sounds – it’s truly an impressive composition and one of the most unique ideas I’ve heard in music over the past four years at sleepingbagstudios.  Does that mean Mike Bee And The Dead Soldiers have their first massive radio-hit on their hands here with “Won’t Walk Away?”  No!  Of course not!  But I don’t think that’s what this band is going for…I’m fairly certain this is art for art’s sake…and I know firsthand that those that subscribe to that mindset will certainly enjoy this new EP.  “Won’t Walk Away” is a truly genius and different idea that’s full of ambition – it certainly speaks to the diversity of sound on this record and is an entirely captivating & stunning experience in music.

I can’t quite remember which order I first experienced these songs myself over time – but I think I might have heard “Black Sun” first.  The riff in the main verse-hook is completely unforgettable – and “Black Sun” continues to build on the enthusiasm & bizarreness from there.  I liked the separation in this track…how it traded-off between the vocals and the guitars to form the verse…I liked how the chorus was more left to the instrumentation to fill in – and it certainly does.  “Black Sun” goes on to reveal the wilder side of Mike Bee And The Dead Soldiers with a rampaging, edgy section of largely instrumental mayhem fueling much of this song.  Great ideas on the bass in this cut – definitely stands out for that as well…”Black Sun” is a real romp through the psychedelic music-experience.

“Walkerswood” to me is a real defining track…I think this is the song where people either decide they’re truly on-board as a full-fledged fan, or if they’ll feel like this is over their head.  “Walkerswood” is just about as complex of a composition as you could put into a tune while still having a massive clarity in the production and music that doesn’t end up muddy.  At times I felt like the main verse was a little too-playful…almost like something you know the kids 12 & under would love – but at the same time, how do you not love that rubbery bass-line that goes with it?  Besides…nothing wrong in trying to corner a section of all the demographics out there anyway – we all listen to music!  And…aside from the verse’s youthful spirit – the rest is pure cleverness in composition and creativity.  Each verse is broken-up with a something unique from the one before…and I liked that; the lyrics keep that thread of similarity there for us to grab onto, but each experience into that next part was really cool to hear.  The bridge in this tune is a wicked moment in time as well…we’re surrounded by nature sounds and the vocals alone before the music is brought brilliantly back into the mix in perfect time.  Love the late additions of guitar into “Walkerswood” – and in general, this was another track from Mike Bee And The Dead Soldiers that I felt like I didn’t see coming; the more I heard it, the more I loved it from start to finish.

If there IS such a thing as a straight-ahead song from Mike Bee And The Dead Soldiers, then the closest it gets to that definition is the final song “Take It Back.”  It still walks a bizarre line from point-A to point-B – don’t get me wrong; but the heavy, hypnotic-rhythm & groove of “Take It Back” mixes the psych-60’s sound with the blues excellently.  Dig the drums on this cut…especially as it heads into the chorus…excellent sound & tone to those tom-hits.  It’s a throwback in sound…but at the same time has the Mike Bee And The Dead Soldiers stamp of artistic-merit…vocally they always keep us guessing with unique ideas and often bend a verse or part of its structure to create something that will truly sound new to you.  I like the additional synth elements that trip-out the atmosphere…and I really think the guitars have moments of real excellence on this tune; “Take It Back” might do the least in terms of separating them from the rest by comparison to what we’ve already heard – but I think the track has enough punch & guts to make the ending have impact.  That guitar-sound scaling up in the chorus alone makes “Take It Back” a worthwhile listen – great part!

Overall though…I stick by my statements – I think if you’re looking for something different, then Mike Bee And The Dead Soldiers should hit the mark for you no problem.  With all five songs having distinctly different ideas, textures, attitudes and sounds – yet all still carrying a cohesive, identifiable element to the music that makes it belong together – I think this band stands a solid chance of impressing many people besides myself with a standout set of creative & bold tunes on their self-titled EP that truly reach out artistically…and succeed fully in their grasping of it.

Listen to Mike Bee And The Dead Soldiers at Spotify:

See Mike Bee And The Dead Soldiers videos at: