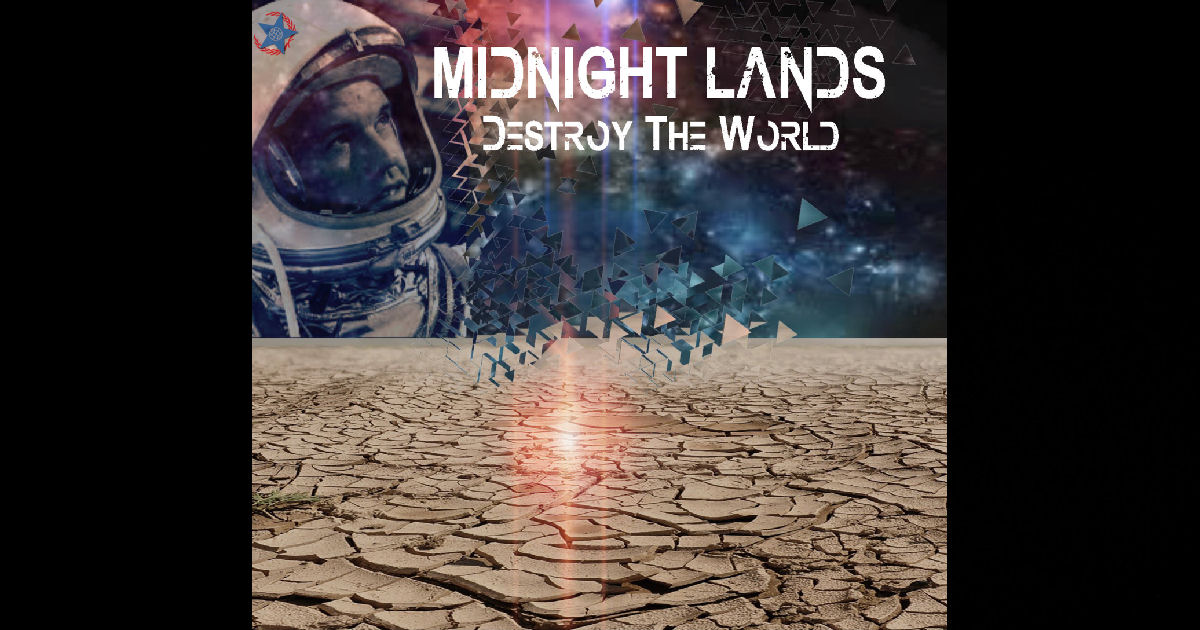 Here’s a guy that knows his way around the studio!

If you look at the credits for Midnight Lands, you’ll find this project is centered around the musical vision of artist Ben Averch…who…appears to be responsible for just about this side of everything other than the album artwork that comes with his latest record Destroy The World, which also houses this here single “Catch And Release.”  From the looks of things…Ben’s a guy that likes to maintain control…I mean, I’m just assuming this of course…but notably, he does take the time to thank his brother Mike and “everyone who offered advice or encouragement during the making of this album” – which aside from the artwork designer Kat Manning who also penned the lyrics for the song “Sea Break,” sounds like “everyone” likely did all this from a significant distance outside of the studio, where it’s up to him alone.

As a long-standing fan of bands like Superchunk, hearing Midnight Lands slam, crash and bang into the beginning of this track was freakin’ wicked…the in-yer-faceness of the music was immediately similar in energy, style, and sound.  Moving further into the song, once Ben’s vocals are revealed, the entire song shifts dramatically away from that comparison, to expand with more of a refined-bounce and Pop-tendencies…arguably much more similar to something like a pumped-up Elvis Costello than anything from the indie-scene as it moves on…which actually makes for quite an interesting crossover sound.  There’s a bit of like…oh I dunno…something like BTO in the mix as well…which is…a thing to consider I suppose…there’s good/bad in making a comparison like that one in my opinion…but overall, you gotta dig on just how much variety & punch there is in the hooks, personality, and music you’ll find here.  If I had to hazard a guess about Ben’s knowledge for the roots of Rock based on this one experience however – I’d certainly be inclined to tell ya that based on what I hear, the dude knows his shit for sure.  Songs like “Catch And Release” are built upon what’s proven to be exciting in the Rock arena and the little comparisons you’ll find that you can make here & there come from all throughout music’s history.

I’m really digging that the bass is fully meaty in the mix of this tune…killer tone and BIG sound from that department and a huge part of why this cut works for me.  Personally, I dig Ben’s approach to both the mic and the lyrics…and ultimately, I can’t find any faults in the music worth a complaint – the dude writes a solid tune and plays it confidently, that much is certainly clear.  Is it a bit strange all the same?  Kinda, yeah!  And that’s just gonna have to be something that Midnight Lands reconciles with over time.

Because it’s far from typical…as much as the ingredients involved might be ones you’re familiar with, the structure is actually much more progressive than you’d probably assume at first…there are hooks for sure, but you’re not really gonna get to spend all that much time with all of’em before moving hurriedly off to the next ones coming at ya as Ben blazes through this tune with a fair amount of speed goin’ on.  Arguably, beyond all things, the main hook is actually the man himself – it’s the voice that’s going to pull in a large quantity of listeners…and in all honesty, drive a few others in the opposite direction too – that’s the natural effect of hearing a style of vocals you don’t often find on the mic.  Ben can sing, there’s no doubt about that…but I would definitely argue he’s likely an acquired taste for a bunch of people out there…which, for those that dig it, is a good thing for Ben – that’s the loyal fan-base.  For the rest of you out there on the fence, I think you’ll dig on the depth of the sonic elements in the music and how he’s got each layer of his instrumentation interacting, reacting, and working in tandem to bring the energy & wildness of this tune to its maximum potential – and I also think the harmonies you’ll find increase the universal appeal of the sound of Ben’s voice x10 at the very least.  So fret not people – there is pretty much a way for all fans on the fringes of Rock to find a gateway into this new single of his.

Interesting combination of style & sound he’s got goin’ on…I’d definitely listen to more, if only to follow this whole thang down the rabbit-hole to find out where it all ends up leading Midnight Lands to; it might be hard to put a finger on exactly what it is…but there’s a uniqueness here that stands out to me.

Find out more about Midnight Lands at the official Facebook page here:  https://www.facebook.com/midnightlands