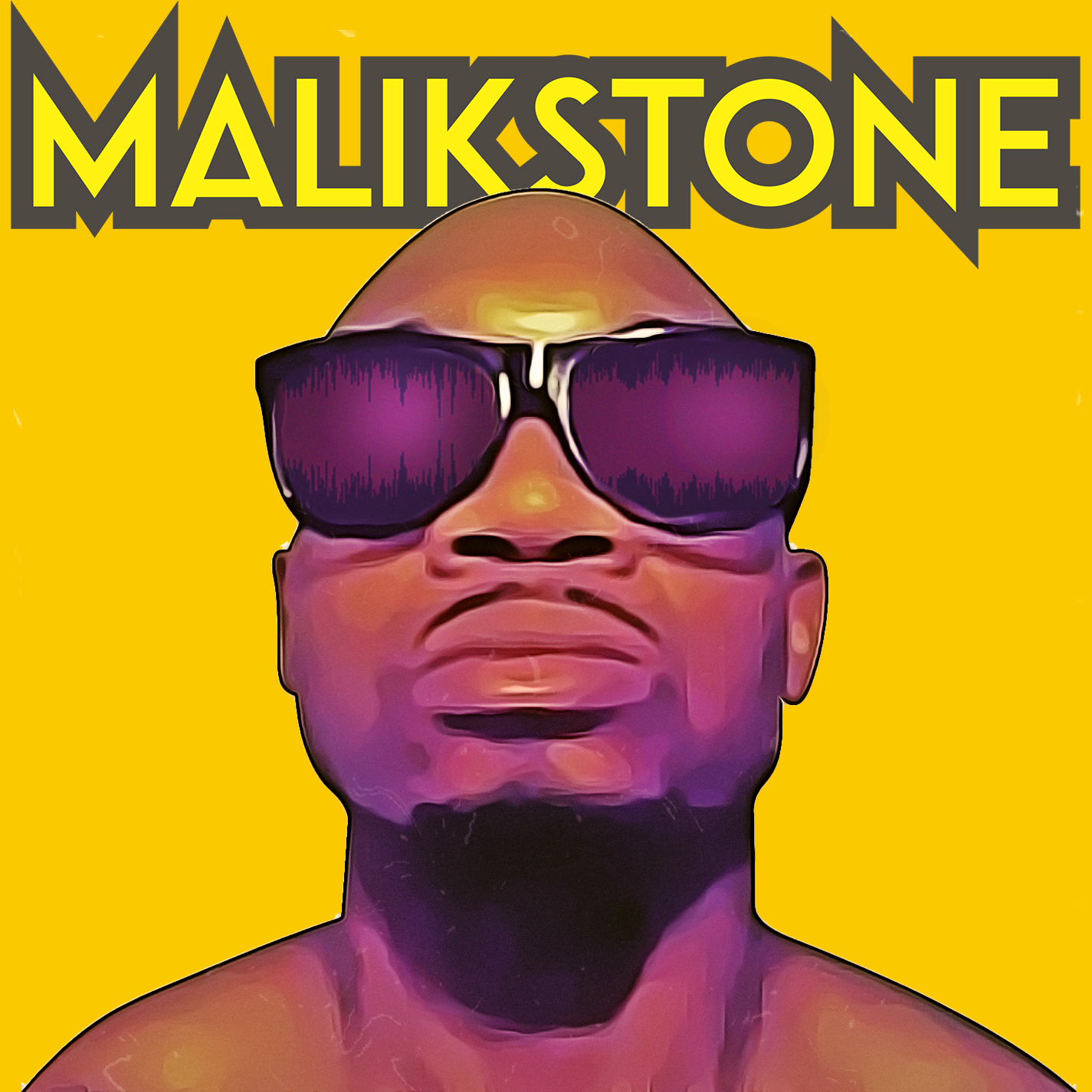 I tell ya…it’s a good thing some people out there have an excellent sense of humor and don’t take themselves too seriously when it comes to interacting with me behind the scenes.  Case in point, the artist in our review this morning – the talented Malik Stone…who discovered the same thing many of you have when talking with me, which is, that I’m usually a smartass, sarcastic punk when it comes to correspondence.  Malik’s a solid guy…he gets that we’re all human-beings in this grind together deep down…and thankfully, he gave my standard attitude a passing grade and let the humor keep this whole process rolling along.  Believe me when I say…the number of people I meet, talk to and listen to throughout any given day doesn’t always find such a champion personality like Malik Stone has.  How we interact can often establish a memorable impact on a reviewer like me…and I’m bound to remember the jokes we’ve shared setting this up just as much as the music itself…he represents himself and his music in all the right ways.

A dedicated collaborator…Malik has enlisted assists on each of the tracks you’ll find on his Soundcloud page.  While he’s certainly skilled & has a clear ability to find the heart of the rhythm of rap – he’s also made a solid move by keeping his music extremely diverse by adding different ingredients to it through the guest-stars he features.  Hopefully he’ll take it as a compliment when I say this…Malik has got himself an old-school tone to his rhymes that will more than likely remind you of Will Smith; for a guy like me that’s grown up listening to Will in one form or another throughout my entire life, it’s certainly meant as one.  I found it both easy and comforting to listen to the tone, talent and beat of Malik’s music from the moment it began to play.  By the way we all listen to music, there’s no doubt that you’ll end up with picking your favorites based around the added-sound & style brought in by each unique talent of the featured guest…but you’ll also find you’re supporting them all.  Malik Stone clearly has an ear for music, knows what he’s looking to hear in his music and has handpicked some amazing people to work with.  The enthusiasm and precision of each of their parts also gives you that audible confirmation of just how stoked they are to work alongside him on these beats…it’s something you can actually HEAR; you know it and you feel it as guest-after-guest hits their moment with precision, professionalism and wild attitudes that seep right into the solid beats that have been put together.

It’ll make you stop and ask yourself out loud – “Where’s that album Malik?” – because there’s enough singles here that you’ll hope he’s well on his way.  And after everything I’ve heard so far – I know I’d be more than willing to grab a copy myself.  Turn these up!

My experience with Malik’s music came with “U.N.I.” starting-up the list, featuring the talents of Nicole Elizabeth lending an assist with angelic-tones that sink right into the chorus and hook.  Malik has used an airy, atmospheric beat in this opening single…it’s bright, bold and beautiful and supports the lyrics as well as you can ask for.  As he rolls through the beat, he hits his moment completely on-point and stays right with the metering of the track perfectly…that warm, invitational nature of his tone pulls you right in quickly.  Handing over the mic in the chorus to Nicole E – she nails the hook with ease, keeping the track smooth and raising up the results of this first collaboration…an excellent first glimpse into the world of music created by Malik Stone in this fully-realized vision.

“Celebration” features Erb and Brendanmusik – both of whom will show up again throughout the list at different points, clearly reliable support to Malik’s music.  This second cut gets moving quickly and the “Celebration” is on within seconds as this party-infused cut makes its presence felt immediately.  Malik comes out gunning hard on this one, picking up the pace of his rhymes to match the tempo and stick with the beat…perfectly nails his part once again.  Good horns & piano combination with the drums and cymbals driving this track…love the rapid-nature of the beat and the way this one comes together as one for an incredible ride.  It’s positive, upbeat and another solid-effort from Malik Stone and his crew of supporting talent here early on in the list.

As it continues on…”Money Liquor & Sex” might give you the impression from the title that he’s about to slip into the more typical-nature of modern day rap music – but Stone plays this smartly and never overplays his hand, never falls into that trap of trying to be anything that he’s not.  You don’t get a gangsta-rhythm here like you might expect – and in my opinion, this is where the line is drawn between a true Hip-Hop artist like Malik clearly is as opposed to what we’d consider Rap to be in our present day.  “Money Liquor & Sex” is a massive triumph in this list and a huge highlight.  C. Ross stops in to lend a hand on the chorus and hits this part with an award winning performance; after several listens through Stone’s list of tracks…it’s hard to get past this track without at least acknowledging the fact that this combination of talent in this collaboration might very well be the strongest one you’ll find.  The music has extremely addictive qualities to it and one of the best written hooks in the chorus you’ll uncover as you roll through the list of tracks.  Although C. Ross only shows up this one time – it’s a performance that will definitely have you coming back for more and hoping that you’ll hear more from these two in the future…because this is a cut that truly works on every level.

I’ve often cited the scenario whereby one amazing track can somewhat hurt the cut to follow, no matter how good it might be…and I think that “AtTheEndOfTheDay” featuring Brendanmusik might feel that pinch a little bit here.  Not a bad track by any means…but right now where it sits on the list, it’s nearly impossible for it to standout as much as “Money Liquor & Sex” did just before this began.  “AtTheEndOfTheDay” has a slightly more old-school feel to its production…a little grittier in the overall sound…and if anything, there have been a few moments along the way and in this song as well where I feel like Malik’s vocals could come up just slightly in the mix.  Never a bad thing to want to hear a guy do his thang more than you already are…that’s just me wanting to get the most out of each moment in the verses he creates…and again, I’d consider that to be a good thing.  “AtTheEndOfTheDay” has one of his more complex rhymes in it…and it’s definitely worth your ear time…but I’d want him to bring himself into the mix a little more so we can maximize that experience and catch the intricate abilities in this rhyme.

“Stayin” brings back Erb to collaborate once again with Stone and Brendanmusik in a slow-jammin-to-mid-tempo groove that keeps it smooth all the way through.  Right here, you can hear this would definitely work as a logical progression from “AtTheEndOfTheDay” – but again, if I was making this into a full-album somewhere along the lines I’d be tempted to move’em both so they don’t take that initial hit after the incredible beat, performance and production of “Money Liquor & Sex.”  Undeniably smooth, “Stayin” hits its stride with confidence from the roll of the vocals to the sway of the beat as these three collaborators find their way to another solid track.  Malik takes his time with the rhyme on “Stayin” and really gets those words to fit perfectly into the music of this jam…almost the opposite effect on this one in comparison to “AtTheEndOfTheDay” – on “Stayin” I’d say you want that chorus-hook to come up just a little to make it pop & shine just a little more than it does.  Generally speaking, you always want that chorus to raise-up the cut to that next-level – the performance doesn’t let this track down in the slightest…it might just be a choice in the production here…but I might also be right out to lunch on my opinion here.  I certainly can’t deny that the smoothness of “Stayin” never leaves…and in that sense, I’d definitely agree with Stone’s decision to not rock the boat too hard on the production of this cut.

Ending this sample of Malik Stone’s music with a final jazz-influenced jam called “Miles Away” featuring guest Joel Roman – the versatility of this rhythm will standout to you immediately.  It’s so different from the rest of what we’ve heard so far that it’s impossible not to notice and bound to capture your attention.  Joel delivers solidly as he can…though I’m not sure it’s as strong in the writing of the hook as the strengths you’ll hear in Malik’s verse.  He’s consistently found a perfect way to deliver the tone in his music…I’d say somewhere right in between Will Smith who I’ve mentioned already and a more modern example like Black Thought of The Roots.  Really digging on the beat and performance of Stone on this final cut…Roman doesn’t hurt the track either, but there’s no denying that it’s your main-star that remains in the brightest part of the spotlight on this final jam.  Smoother-than-smooth ending to what I’ve heard overall though – Stone has managed to keep me more than entertained throughout the entire set and can definitely consider me to be a big fan of what he’s created here so far.

So again, I ask ya…where’s that full album Malik?  Cause now I want one!

I’d expect it’s not too far away from happening…it looks like most of these tracks were created on the inside of this past year or so…which leads a guy to believe that he’s right in the zone right now and making music at a rapid pace.  Best thing that can be said is that the quality never seems to drop out on what Malik Stone puts out and he’s kept his standards up throughout this tracklist…and whenever that album might come out – I’d definitely expect great things from him.