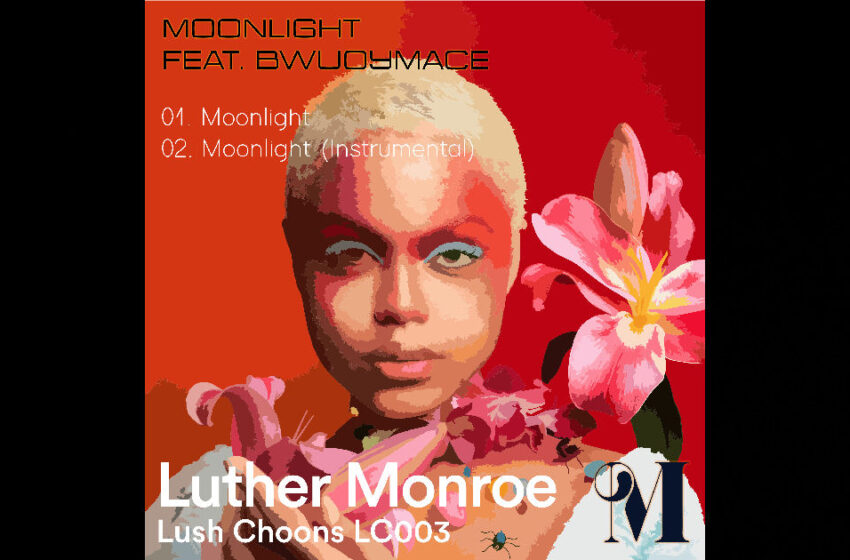 Fantastic definition to this cut…if you’re lookin’ for music you can genuinely feel, this artist based outta the UK has got somethin’ for ya for sure.  An electronic music producer by trade, you can hear exactly why that is with the spectacular mix you’ll find on this single “Moonlight” from Luther Monroe.  Servin’ it up two ways – we’ve got one with vocals from BwuoyMace on the mic, and an instrumental version as well…so any way ya like it, Luther’s got ya covered – and any way ya slice it, you really can’t lose with this single.

Chances are, the vocalized version stands out as having more of a shot with the World Music crowd.  There’s all kinds of options really…you could probably make an argument for the R&B or Soul sections of the ol’ record store or your playlists online as well…BwuoyMace, aka Mace, aka David O. Iseghoede, does a stellar job of adding even more color into this cut through the sound of his voice & the artistic textures & tones that he has.  Dude’s got a very stylistic & signature vibe of his own, and it complements what Luther’s created really well…it makes “Moonlight” have a different & unique level of appeal to it that the instrumental doesn’t have, and vice versa.  I might lean towards the instrumental version myself personally – but I’m not at all opposed to what I’m hearing on the main version with Mace on the mic…heck, I’m cheering for this collaboration when it comes right down to it.  It’s not a typical cut by any stretch of the imagination, you feel me?  I’m always about finding new music that attempts to do things a bit differently than the rest are doin’ it – and while there’s a distinct beat & vibe to “Moonlight” that’s fairly universal, the addition of BwuoyMace actually makes a track like this more niche than it is in its instrumental form – and that’s not usually the case!  Anyhow…I never shy away from things like that, I embrace them over here on this side of the screen and speakers – hopefully you’re the same.  This is a collaboration that brings a highly artistic dimension to the art & craft of a single like this, and they have no problem at all giving this experience the uniqueness it deserves.  As a result, even though it’s not like you’re going to catch every line word-for-word, the song itself, is still remarkably memorable overall.

As an instrumental, I felt like “Moonlight” might have come out even more impressive without vocals than with’em.  No disrespect whatsoever to BwuoyMace – the dude does a great job on the official version of this song, and online you can see he’s been thriving with a solid music career of his own – I just suppose I felt like, without the vocals, we really get the opportunity to fully realize what an impact the music itself makes when it comes to the high definition vibes of a track like “Moonlight.”  For real y’all – LISTEN to the thickness of this bass-driven beat will ya?  Monroe’s makin’ music you can’t help but feel…and I think the people out there will really appreciate the spectacular clarity that can be found in his production.  For as much low-end as there is in a track like “Moonlight” (Instrumental) – it’s quite impressive how bang-on the mix is, and how crystal clear every other element of the music is as well.  More often than not, usually when you’ve got such a dominant sound in the mix like the bass you’ll hear in “Moonlight,” that somewhat becomes ALL that we hear…and in this case, thanks largely to the talent of Luther Monroe & his precision as a producer, we can hear absolutely EVERYTHING.  Like…no joke – it’s SO CLEAR that I’d be willing to bet if he dropped a pin in the studio, we’d have heard it in the mix, even with everything else that’s going on.  Credit where credit is due – he’s got this song shining with tremendous definition & dynamics to it, and real depth so deep you could practically take a swim in it.  Ain’t a doubt in my mind that a guy with a gifted ear for sound like Luther has belongs doin’ what he’s doing – there are multiple places for this man in the music-scene with the talent he already possesses.

Like I said at the start – I really don’t think you can lose no matter which version you choose…hopefully, you’ve got an open mind & a musical palette that likes a whole lot of things, so that you can happily choose BOTH of these variations to rock on your playlist…there’s significant substance and style here.

Find out more about Luther Monroe from his official site at:  http://www.lushchoons.com