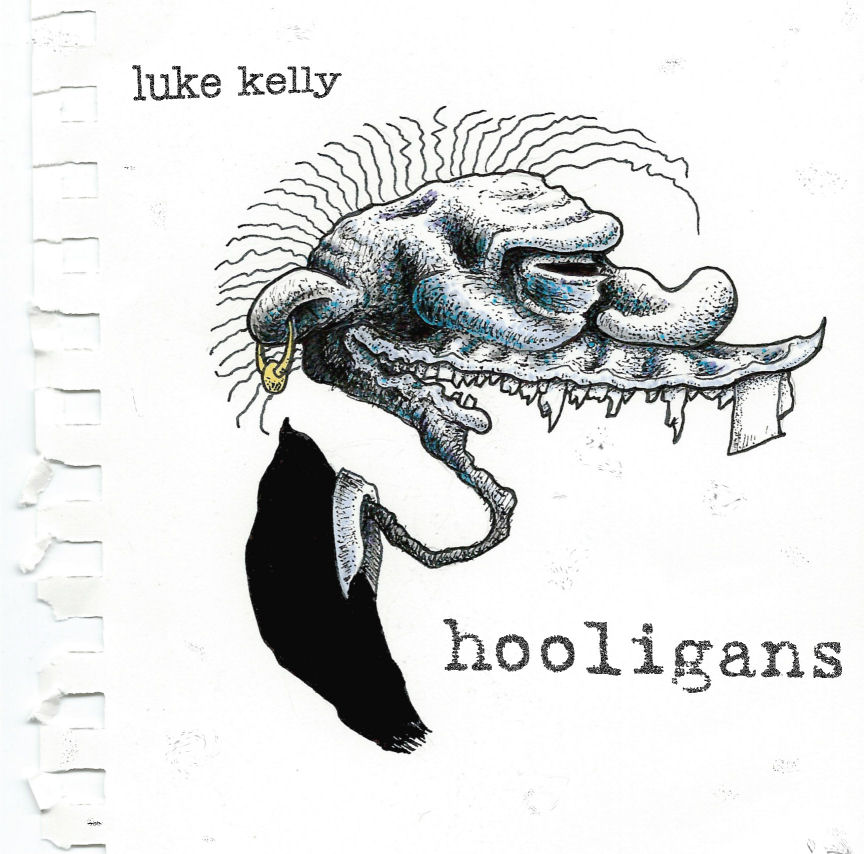 I don’t know if I’ve ever felt so sorry for my wife.

While this might be absolutely, 100% up my own crazy alley…I can tell you right now this is definitely not music for your mom; I’m sure that Luke Kelly knows his music is generally not for a lot of people. That’s all theoretical of course, but I’d be willing to wager on a couple things I know for certain like the Hooligans album twisting, turning, charring and burning from all angles as it plays and Luke Kelly’s tremendous gift for assembly, layers and structure.

Alright…hold up just one moment here…I just read some pretty damn important information you need to know before this goes any further. Luke Kelly is the sole hand behind each and every recording and sound. My jaw is on the ground at this point…I would have thought there’d at least been a little help, but he’s pulling off all this incredible noise all on his own and it truly is a tremendous achievement in the scientific field of sonic-studies for the A.D.D. generation.

With a Fantomas/Mr. Bungle like flair for the dramatic and theatrical, “Deadline Anxiety” doesn’t wait more than two seconds before launching into its full-scale attack. Seriously – this song is bent on killing you via spontaneous combustion as you take this wall of sound in. BUT…oh my people…BUT…if your ears can separate these sounds (which should be no problem, Kelly’s got a masterful producer’s grip on the controls) there is a ginormous amount of substance and gritty beauty to this song. It’s by far and away one of the most ATOMIC opening tracks I’ve ever put my ears on.

If you were staring at the list of credits for instruments Luke has used on and throughout this album it would…probably bore you to tears to be honest. It reads like most novels do, only backwards and upside down – but believe me, the list goes on and on and on; it’s both astounding and incredibly inspiring. As “Concert Hall Circle Pit” gives you a short reprieve for a sullen minute or so full or gorgeously-dark string & cello work…like the Fantomas under the guidance of good ol’ Mike Patton – Kelly seems to be able to lead you into the beautifully melodic just as easily as he can flip the switch into masterfully-controlled chaos. When “Concert Hall Circle Pit” heads to change up the pace, there’s no way on earth that a person couldn’t notice the flip from sweet-sorrow to frantic drum-beats, piano, strings and more bringing in intensely packed-in sound.

One of my absolute favourites (yep, this album is kicking ALL the ass for me, not just some) was the minute-long cut called “Those Goddamn Kids In The Basement.” It made me wonder aloud here in the studio for a moment…we call sounds like these ‘experimental’ – but are they truly experimental when the guy behind the controls and sounds knows EXACTLY what they’re doing? This…this song of…absolutely…pounding and relentless musical-fury…somehow still retains a jazziness and listenable quality throughout even though your mom would say it most likely sounds like the garbage truck got stuck in the alleyway. I fuckin love it.

You know what else I REALLY loved? Ha! The NEXT track of course! “Grunt And Grind” is so goddamn good my teeth hurt from clenching down this smile. With the meatiest dose of bass this side of Primus and Failure – oh my LORD this song just absolutely kills, shreds and pounds at every turn. A full-on assault from moment one until about two-twenty in as it throws to a beautiful breakdown and threatens to come raging back at full-force. The effect…is incredible; Kelly never lets it fully loose like it had been pounding on earlier, but rather musically hints at its possible roaring comeback at moments towards the end, teasing your ears and getting you to brace yourself once more.

Hooligans carries the danger, menace and in-your-face pace into “I’m So Sorry For Kicking Your Teeth In,” which is also not a ballad, and incidentally pretty much does kick your teeth and face right in. With big sounds contrasting against fantastic violin sounds, he’s in full gear here and kicks into his most dark & creative towards the end. Setting the perfect stage for a switch in gears and sounds, Kelly takes us to “Junk City” – a to-die-for track full of horns, unreal bass and guitar sounds and a rad-as-fuck drum-beat. The trumpet sounds make this track shine unbelievably bright in only a minute and a half; you’d never realize how short some of these songs are due to how incredibly jam-packed they are for sound. Songs of length like “Hold On! Wait Up!” are three-and-a-half minutes of a sonic-eternity for those that wouldn’t be able to handle to stuttered-shot franticness of the beat and the constant curious nature of soundscapes blending together. “Hold On! Wait Up!” is like what might happen if you filmed an entire circus performance and sped the whole two hours up into 3.5 minutes. Awesome. Captivating, engaging…Luke Kelly’s music takes such an intense grip on you there’s no possible way you could get loose.

Taking in a beat-down from “Brood Metal,” Hooligans begins the second half of the album and rages into the subtle but SO DANK and SO DIRTY little ditty known as “Mild Paranoia.” It’s like he’s hitting the bass guitar with sticks or something to get these incredible low-end sounds. However Luke is going about it, he’s again, kicking all the ass with an uncompromising breed of music that forgives no one. Even as he settles into the second, somewhat dreamy haze of “Unsettlingly Familiar Dreams” it’s still not enough of a chill-out moment to catch your breath before he comes raging back into the beat and then onto the explosive “Awkward Angst.” I really like the blend of extremities against the classic horn and orchestral ideas on this album…it not only gives the music an incredible feel overall, but it ends up feeling oddly like you’re amidst the middle of a Bugs Bunny cartoon or something old-school Warner Brothers at times. I’m not sure if it’s an anvil about to fall, or we all go hunting wabbits, but there’s an odd-cartoony feel to some of these tunes that really makes for a completely captivating listen.

But the genius on display to go alongside that unique feel is undeniable. Listen to the timing and perfection of “Wolfgang’s Rotten Recital.” THIS IS MADE BY ONE PERSON. And I’m assuming by that he means there are four exact-copy CLONES of him that also play in his band. The production and mixing work is so beyond professional this guy could literally put some of the best in the business today to absolute shame, have them turn off their boards for good and retire. If not “Wolfgang’s Rotten Recital,” then surely “Plagued With Intrusive Thoughts” will convince you. Why wouldn’t you already be convinced throughout the rest of this incredible album?

For atmosphere, grit and texture…I think I might just have to go with the final seething moments of Hooligans, which ends with “Speak Slowly, I’m A Little Hung Over.” Brutally haunting and terrifyingly clear…this is the song in your nightmares when you wake up in a sweat-covered bed. I personally keep looking over my shoulder, even though the doors are locked and no one’s home; half of me is expecting Rod Serling to spring back to life and appear behind me.

Because much like The Twilight Zone – this new album from Luke Kelly takes you completely into his world. Focusing your attention on the music, production and sound 100% of the time without letting go for a solitary second; both I know and Luke know this isn’t going to be music for everyone; but for those that really dig a full-blend of raging, skilfully-played instruments of all-kinds in melodies of mountain-sized proportion…you’re gonna love it.