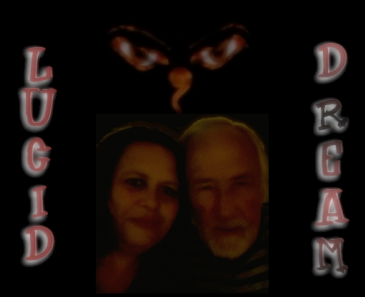 Now here’s something interesting to listen to! In many ways…I’m not quite sure just how to relay the experience of listening to Lucid Dream, which, for a guy that reviews music daily…it’s nearly an eerie feeling! What I can tell you, is that after listening to Lucid Dream Rocks Again several times over I’m left with the sense that this musical duo truly loves to make the music they’re making…it’s like you can hear what an incredible time they’re having, even in the more sullen moments of song throughout the album.

And one thing I can tell you with absolute, 100% certainty – there is DEFINITELY a reason that multi-instrumentalist & half of Lucid Dream – Harald Nilsen is better known through his reputation as Harald “Thunderhand” Nilsen. Believe me – this guy can PLAY.

You’ll get an instant dose of his talents as the epic opening track “Unfinished Business” starts into its bluesy, smoky-lounge atmosphere. Clocking in at nearly ten minutes long – this track covers a lot of ground in one shot musically. It did make me wonder however…with the following tracks being so short by comparison, if this is the right move to make on an album with seven songs. I’m not saying it didn’t work for me – I dig the track and I think it’s diverse enough to fit the bill, but I do wonder whether or not the general population & music-fans out there would think the same. At any rate – the level of guitar playing established in this first song from Lucid Dream is an absolute showcase for the incredible guitar-work of Harald Nilsen; he sounds incredibly at home on the guitar, like he knows the inside & out of every nook & cranny on it.

Astoundingly, the absolute same can be said of Thunderhand on the bass as well. With a flair that would put Tony Levin, Flea and Les Claypool on their feet for a standing ovation – his performance on “Summer Feeling Blues” is nothing short of incredible. Vocalist Gro Nesse Bremner really lets loose on this track and for myself personally, this was the track you can hear she’s most comfortable in. She’s right in the pocket throughout this entire groovy track and sings with conviction and confidence, audibly giving this song 100% of her best.

“A Bit On The Blueside” is another texturally-heavy, smoky & hazy track. The subtle guitar in the distance is playing feverishly while the vocals hang in the air like a wisp of smoke from a dangling cigarette in the mouth of a movie-star, circa 1950’s. It’s the kind of song that would make for the perfect montage in a drama, set in a café somewhere quaint while the rain beats down outside. Of course, this might just be the way I hear it…

“The Scream Within” is the toughest track on this album; I think I want to like it more than the rest…but I’m just not sure, even after multiple listens. There’s so many points where Bremner is just nailing the vocals, and many others where she makes stylistic-choices that didn’t always resonate in the right way for myself – but in terms of the writing itself and vocal-flow, again, she’s got it nailed. It’s the biggest ‘anthem’ style song you’ll find on the album…and the kind that makes you feel like no recorded version would compare to how amazingly she might just pull this off in a live setting anyhow.

“Down” is a track that really shows the great songwriting & magic that occurs between these two. I love this song; I think the guitar-work, again somewhat subtle & subdued in the background supporting the vocals…is just awesome. If anything – I would have brought those up even more in the music-mix as Bremner hits the chorus with confidence and could easily match against a ‘bigger’ sound. But that’s hardly a complaint – this is an extremely well-written song musically, lyrically and performed exceptionally well.

With the final two songs, you get an excellent contrast and final display of what these two best and again, that magic they seem to have in this project together. “Inventory Duty” is a sweet song, with harmonies provided by both and displays the soft-side of Lucid Dream. As it winds up with the guitar-based “If You Could;” we get an excellent splash of the guitar back up to the front of the mix. With all the skills Harald clearly has on guitar – spending so much time towards the back of the mix is clearly a choice; this music is about more than his own incredible skills. And though we get another absolutely killer solo nearly 4 minutes in that makes you easily want to turn the volume knob up to the roof – it’s those moments throughout this album where these two blend themselves together in just the perfect way that truly make this album the enjoyable experience that it is.