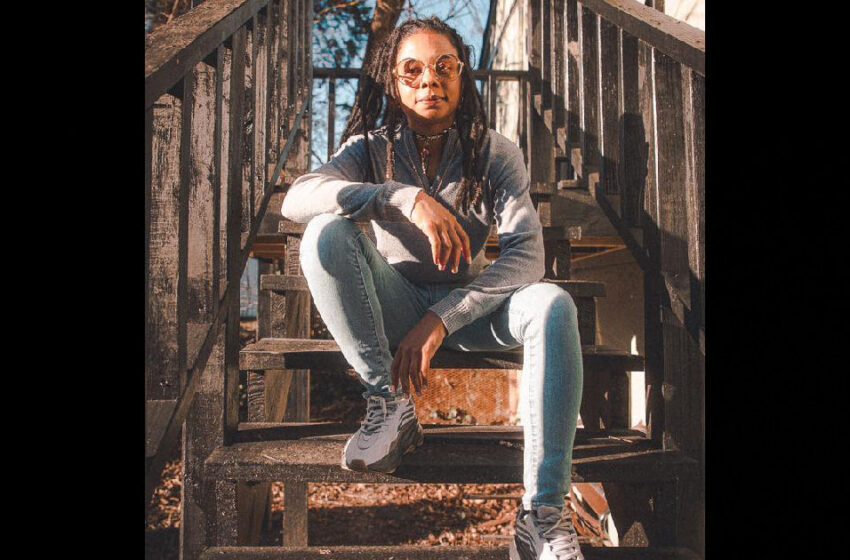 Don’t get me wrong…after having listened to about as much music as a human being ever could in one lifetime, I’m no stranger to the fact that many artists/bands we listen to take a few spins for our ears to be convinced about what they’re hearing – but don’t get it twisted either…it can be a whole lot more satisfying to hear a band or artist that instantly connects, though it’s a lot more rare to find ultimately.  Here in the case of Loyal Machette, we’ve got a case of the latter for sure – I knew right away on that very first spin through “Suffocating” that I was in for an artist with a sound I’d be sure to dig on, and she never disappointed from that first click forward.  She’s got a whole bunch of cuts out there beyond the two I’ve got in review here today too…from what I can tell, her history releasing music as a professional independent artist traces back to around 2017, with her most productive years having come after that in 2020/2021.  I’m seeing just one track from 2022 so far this year…I might be missing something posted up somewhere else in the ether of the internet, but that’s what it looks like.  She might have some catching up to do to keep pace with the previous two years, but there’s tons of time left in this one to make that happen if she chooses to.  Based on everything I’ve seen & heard, it certainly sounds like she could…Loyal’s got a really natural vibe that reveals an authentic connection to the craft of making music you don’t find in many artists out there.  A lot of what she creates is a vehicle for her poetic mindset and lyrical talents – but make no mistake, she definitely knows her way around a beat and the microphone – Loyal Machette, aka Loyal Machexe, has all the right pieces required to move your mind, body, and soul.

Of the two singles, “War On” traces back a bit further than “Suffocating,” so we’ll start there.  Technically released back in 2020, “War On” gives you a stellar glimpse of her melodic-based poetry, her signature style on the mic that resembles free-flowing thoughts, the smart choices she makes in the music she chooses to work with, and the resiliency of her spirit through her words, which is clearly as artistically fearless & courageous as it is unbreakable.  Musically, “War On” will remind some of you a lot of what you find in songs by Boards Of Canada in the Electro section, the soul you’d find in something like Zero 7, Peace Orchestra, or poetry of Erykah Badu, and for the real savvy among us, maybe even something along the lines of LoFi Chill from our amazing independent scene, albeit with more words involved here in Loyal’s tunes.  Similarities yes…we’ve all got’em somewhere – but all-in-all, Machette’s songs hit differently in the right ways, and no single comparison would ever quite explain it all or be enough to fill you in…sometimes it’s best you just listen for yourself to get that understanding…in fact, I recommend that you do.  While a couple years back when “War On” was released would be entering her fourth or so as a career professional, that’s still hella early on into the adventure…I look at it this way – she was about four years in when this cut got recorded, and there’s not a thing I’d advise her to change about it.  I recommend SOMETHING to almost EVERYONE…because that’s what I do as a music critic and genuine advocate on behalf of the artists & bands out there in this community we love…I always want everyone to reach that next level…some folks need a shove to get there, and others, like Loyal, will find their own way.  Some of you keep me up at night wondering – Machette is the opposite; I sleep 100% peacefully knowing that an artist like this will always find the success she’s seeking out, however she chooses to define it.  You can hear right away from “War On” that the quality & consistency is there, the ideas all connect, the music is solid, the vocals are great…she’s great already, and no doubt, she’ll keep getting better as time goes on.  The hooks are solid, the style & swagger are on-point, “War On” has a full dose of that resilient spirit I was referring to earlier on – Loyal Machete was born ready to make music y’all.

“Suffocating” was actually the first song that I heard by LM as I started to have a listen to her music – and I’ll readily admit, she had me hooked straight away.  It could be the case of a strong first impression that has me feeling like “Suffocating” still has just a bit of an edge over “War On” in terms of my favorite cut of the two…but we’re splitting hairs dear readers, dear friends…you can’t lose with either of these singles and they both serve as a fantastic gateway into Machete’s music.  “Suffocating” combines a truly brilliant, dreamy vibe in the atmosphere, with genuinely insightful, grounded lyricism – so it’s like you get the best of both worlds in one experience, you feel me?  It’s SHORT…I suppose I’ll concede that…but really, that’s not so much of a complaint as it is a craving for MORE…and overall, I’d say that’s a good thing.  What could be worse than hearing a track that’s 2:16 and feeling like you’d had ENOUGH?  Loyal knows how to give you the right amount of everything to keep ya entertained AND coming back by making music that’s as substantial as it is sincere.  Excellent use of melody in her vocals & rhymes, and a real thought-provoking set of lyrics to go with the evocative vibes of the music…”Suffocating” might be short, yes – but this is a homerun.  We are all capable of pushing repeat or playing it again – that’s facts – but what’s equally true, is that LM’s given ya every reason to WANT to return to “Suffocating for another spin with all that she’s put into it.  She’s got that old-soul vibe goin’ on you know?  There’s a wisdom threaded deep into the emotion behind her words…highly addictive to listen to without a doubt – Loyal Machete’s got material that runs deep in several ways & I’m confident you’ll love it just like I do.

Find out more about Loyal Machete at her official website at:  https://loyalmachette.com