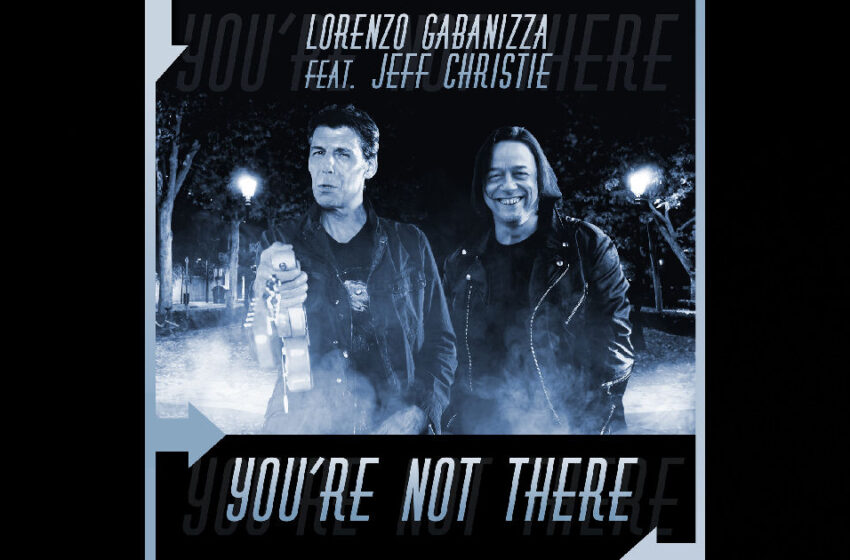 I don’t usually start my reviews out like this, but there’s a ton of people in the mix here that deserve a shout-out, so let’s do that.  Joining Lorenzo Gabanizza and Jeff Christie on this single “You’re Not There,” you’ll also hear the talents of Rusty Wright (Lead Guitar), Darrell Nutt (Drums), Bruce Hoffmann (Pedal steel), Max Gabanizza (Bass), Hale White (Piano), Snake Davis (Sax), and Katey Brooks (Backing Vocals).  Just a few names involved eh?  Let’s not forget the excellent mixing by Peter Hall & mastering via Greg Calbi as well…truly, they all deserve credit for what they’ve accomplished on this flawless single here.

Bonus points to Snake Davis though – that’s obviously the coolest name in music’s history, full-stop.  That being said – they’ve all got remarkable resumes…you can Google these players and you’ll quickly discover that Lorenzo & Jeff have got nothing but A-list talent surrounding them from every angle, in addition to being fantastic themselves.  Believe me when I tell ya folks, the very last thing any of these accomplished talents need is whatever my opinion would be – I’m just a dude with a blog – this whole crew has already enjoyed a successful career over years & years immersed in their craft professionally, with multiple members of this particular lineup having secured awards & accolades of all kinds for their efforts.  To me, it’s the kind of thing you can instantly hear…it’s one thing to read about a combination of talent like this, but it’s another thing entirely to listen to how tightly a group of dedicated professionals can all snap right into place like they’ve been together for years, for a moment in time.  You listen to a song like “You’re Not There” and you know within five seconds or less that you’re not going to find a hair out of place from the production to the performance – and by the time you’re about less than a minute in and the beauty of the spirited backing vocals join in to strengthen the sound, you know you’ll be hooked on the rest to follow.

So.  You’ve got Lorenzo (Vocals, Acoustic Guitar, Songwriting, Composition) at the helm leading the way, and Jeff (Vocals, Backing Vocals) bringing his words to the mic with gripping sincerity along with him – and THEN, in addition to these two undeniable talents, you ALSO get a whole team of amazing musicians to support them?  It’d be really hard to not appreciate just how much skill is really on display here, if not outright impossible.  I’m not here to argue that “You’re Not There” is going to be the happiest song you’re going to hear this year – it’s not – but if these players doing exactly what they were so clearly destined to do in this life doesn’t somehow bring a smile to your face or grin of respect, I’d be surprised.  There are some immaculately stand-out aspects of what you’ll hear…like the pedal steel from Bruce, and the saxophone from Snake were continual highlights for me every single time I listened – but let’s be crystal clear here for the people in the back just in case someone hasn’t heard me yet…there’s simply nothing about the execution, professionalism, and passion in any of these players that you wouldn’t love.  “You’re Not There” is a boldly evocative single that’s built partly on regrets, partly on nostalgia, and equally of acceptance in the way things are; we live, we love…and unfortunately, along the way, we lose as well – we don’t “even have the time to say goodbye” in far too many of the situations we face.  The vocals from both Lorenzo & Jeff make an endearing & lasting impact on ya…they’re both vibrantly expressive, full of emotion & spot-on tone, and have clearly made that connection to both the words & the music surrounding them in the melody.  Seasoned professionals at work here y’all – expect nothing less than the very best in each & every department/aspect of a song like “You’re Not There,” because that’s exactly the level of integrity you’ll find in these players.  I would imagine they’d rather not play at all rather than bring anything less than the best they can bring to the material & music they make – and it’s a testament to their collective commitments to their craft when you hear such impeccable results.