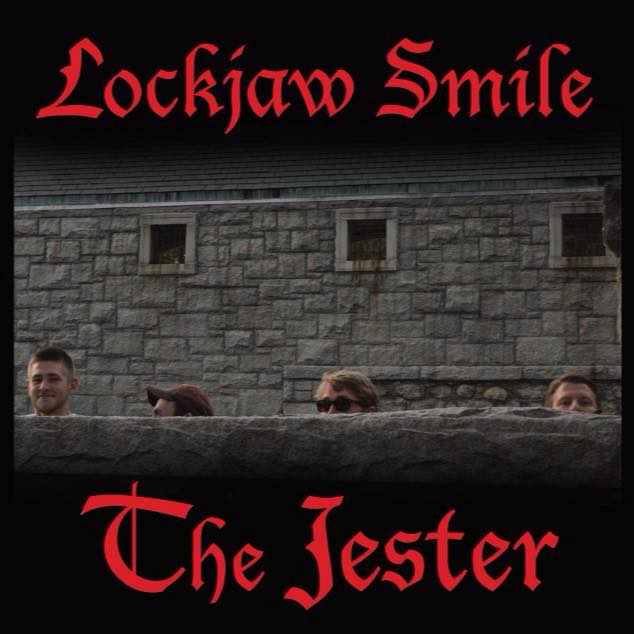 Someone has clearly infiltrated the Lockjaw Smile camp…and I’d assume that it must be The Jester himself.  Of course…that’s just a theory I’m working with…but talk about a suspicious looking album-cover would you?  Looks harmless enough right?

Well…I count four heads whereby anything you read or look at online tells me there could also only be three.  Isn’t that how that old song goes?  Something like ‘one of these heads just doesn’t belong here, one of these heads just isn’t the same?’  I’m pretty sure it was close to that.  Also…I had a messed up childhood.

Pretty sure it’s a four-piece.  According to that picture on the cover and the bio on their main-site, you’ve got four players.  If you look at Facebook (pfffff not NOW – they’ll have already fixed it by the time YOU read this!) you’ll find that they’ve only got a three-piece lineup even though it started in Bill’s basement – the one player that’s not listed in the social media version of who’s in the band.  Like I said – I’m sure they’ve changed that by now…you won’t see it – but I did!  Safe to say that Bill is more than likely the one of the four also in charge of their social media and is just terrifically humble and/or forgetful.  Anyhow!  There’s music beyond the cover of this record…so regardless of whether there are three players or four players, or three players plus-one Jester…let’s talk about it…

“Mr. Mister” starts up their latest EP…the song, not the 80’s band.  And within seconds – I LOVED what I was hearing…we’ve got a serious amount of Dinosaur Jr. influence in the guitar tones and sounds.  Lockjaw Smile seems to really carry the torch here for the alt-90’s bands that were in the shadows like Superchunk, Sebadoh, Cold Water Flat, Archers Of Loaf…that kind of loose alternative-rock that is always a pleasure to listen to for its sheer honesty and lack of bells and whistles in production to slick out the sound.  Bands like this and like Lockjaw Smile understand getting that ‘live’ feeling onto a record and don’t waste their time on overproducing what is already a good sound as it comes out naturally.  Don’t get me wrong…it all still sounds good – you can just tell that the focus isn’t on turning them into a top-40 band – which has always been and always will be just fine by me, thank you very much.  “Mr. Mister” has solid energy to start it up…the vocals were good – but also like many of these bands I’ve mentioned in comparison – a lot of the hooks you’ll hear come through the music, rather than the vocal-melody.  I understand that sounds like a given…I assure you it’s not; take another listen to 99% of the music you’ll hear on other records or radio-stations out there and you’ll find that they’re almost always driven by the melody created by the vocals.  As if the lead-singers out there didn’t already have enough pressure on them as it is; as listeners we basically always expect them to be the driving force of the entire melody and have the music supporting those ideas instead of the other way around.  I felt like “Mr. Mister” had vocals that matched the energy well-enough – but they’d be a long way away from what truly pulls us into this first track…it’s all about that incredible tone and guitar-hooks in the main-line of the verse, solos and surrounding the chorus.  I’m not complaining about anything for the record – just explaining what’s pulling me into Lockjaw Smile and the opening of The Jester…I certainly found as the song progressed and I got more into their style/sound that the vocals also got better throughout the experience, building and structure of “Mr. Mister.”

The Jester EP continues with guitar-riffage starting “(Revery) New Day” – and Lockjaw Smile quickly heads to the recipe that worked for the opening song a second time around.  Much of the writing, structure, punch and pull of the music sounds nearly like a continuation of the opening song or at least certainly, a logical progression from where the record starts without taking too much of a leap at all.  I do like the energy this crew has…and I like the way that they choose to record their vocals with that hint of reverb and background-vocals jumping in along the way.  Drums sound like they’re kept good & busy…plenty of solid hits coming from the throne and I like how the guitars and bass tend to cut away to leave the vocals and drums alone for a second.  The writing of “(Revery) New Day)” definitely has some good ideas on display…and most importantly, I think you can really hear just how much this band truly loves to play through a song like this.  There’s a lot of enthusiasm and effort here; nothing sounds like ‘work’ though – just pure rock fun & good times.  I can dig that.

If anything…I thought that the middle track reminded me of that pre-Weezer project…I want to say Avant Garde…is that right?  Might be.  There was a slightly more punk-rock-meets-hair-rock, less-slick version of Weezer helmed by Rivers at one point…pretty sure that was the name of it.  “Young Girl” kind of reminds me of that; it still has smart pop-rock sensibilities, but its thrashing hard-rock tendencies come roaring in to dominate the overall sound.  Middle of the road for me in the middle of the EP…I like the energy, I love the enthusiasm…but I can’t just hand out a pass to passion alone; “Young Girl” dips a bit for the quality in the vocals and their structuring.  “Young Girl” sounds to me like they’ve written a strong chorus and nearly called it a day knowing they could rest on the energy and pull of those hooks alone…and it nearly sounds like the verse was an afterthought placed more forcibly into the writing as a result.

“Push” has a little bit of the same issues as “Young Girl” along with a few timing missteps that are audible.  I think they get themselves a lot closer to the sound of River’s Weezer-vocals on “Push” – and I dig that in some ways not in others.  Don’t get me wrong…I’m certainly a Weezer fan…I’m still the only person I know other than the other guy in the car with me that’s been arrested on the way to a Weezer show…so it’s not the similarities to that sound that bug me, that’s a style I personally enjoy a lot.  That being said…if I was pinned down and questioned on what my favorite songs would be from their entire catalog, I’d be leaning towards the more melodic slower stuff.  It’s the combination of hard-rock into the sound that I’m not quite sure works…like crossing Van Halen with Weezer or something to that effect on “Push.”  It sounds like it’s being pulled in two directions strongly and almost battling each other for supremacy on “Push” – but there were things I liked for sure.  I dig the breakdown and bring-back to close the track…I thought they wrapped this one up tightly from the looseness & wild-rock sound of where it all began but it’s their lighter-side like on “Mr. Mister” or the album’s title-track that seemed to stick with me the more I listened.

As “The Jester” ends the new EP from Lockjaw Smile, they dip harder into the pop-melody in their final tune.  Almost a sailor’s song in the rhythm and sway of the beat and melody…the words are tough to catch in this one but you get the essence of what’s being said and enough of a melody to sing along with.  Great sounds of like…what is that – mandolin right?  It sounds brighter than guitar…so I’m assuming that’s what it is…and it allows this final song to breathe a little more with the inclusion of folk-elements helping assist in driving the sound.  I think “The Jester” was a solid ending to the EP and definitely represents the aloof nature of the band & their music while still providing an entertaining final track you can take seriously.

Overall…I can see that Lockjaw Smile isn’t a new band – they’ve had albums & EP’s released in the past and have been a band for a while now…but I’m still hearing that search for comfort and a sound they can truly call their own…still hearing that room for further refinement of their ideas and really defining each and every part of the music so that they stand out & pop from the music more than sound like one continuous idea over the course of a song’s length.  Definitely potential here…and maybe their style is the kind of style that can never fully be pinned down…maybe their style is that wildness you hear and that’s what truly defines the band.  I think they’ve got a lot of creativity and good ideas…the pieces are certainly there with or without them all being listed on Facebook…and I’d expect that this band could very well take that same path as Weezer and continue to develop strongly over the years.  Could definitely be potential and promise here…but of course, time will tell the true tale of that story as it marches on.  For now, what I’ve found here on The Jester is a good start for me…I was certainly entertained – but I’d be lying if I didn’t say I can hear that this band is capable of more than they’re showing us here in these five songs; I’m interested to see/hear where this project ends up.